Education and Women in Crisis

Sabin Muzaffar sheds light on the impact of education on internally displaced and refugee women. 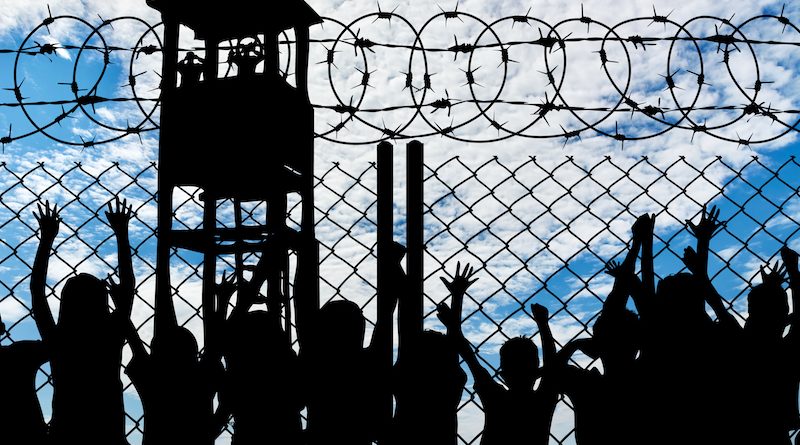 The debilitating economies of underdeveloped countries, crippling third world debt crisis, terrorism and the ravages of war define the world we live in. A staggering 51.2 million people worldwide have become casualties of conflict and persecution, and are currently living under the worst conditions imaginable. Of this huge number of people, almost 80 percent comprise women, children and adolescents, with about 26 million internally displaced persons (IDPs). Disturbingly, the “weaker” female gender living in crisis situations stand at a highly disadvantaged position due to their susceptibility to sexual or gender-based violence as well as minimal access to assistance in terms of livelihood, healthcare and education.

However, there has been growing recognition and attention on improving the quality of lives of refugees as well as internally displaced women, thereby quickening the pace of sustainable peace-building and development processes. That said, much still needs to be done.

Valentine M. Moghadam puts it in her article “Peace-building and reconstruction with women: reflection on Afghanistan, Iraq and Palestine”– a woman’s reality in conflict-affected areas clearly illustrates the “hegemonic masculinity of political actors” result in extreme forms of repression, poverty, harassment, all of which stem from illiteracy and barring women’s access to schooling.

A woman’s reality in conflict-affected areas clearly illustrates the “hegemonic masculinity of political actors” result in extreme forms of repression, poverty, harassment, all of which stem from illiteracy and barring women’s access to schooling.

According to a concept paper presented at the Security Council Open Debate on “Women, Peace and Security – Displaced Women and Girls: Leaders and Survivors” in October 2014, “There is now a broad consensus that a peace process that does not include women is a faulty process; there is widespread outrage about the heinous crimes committed against women and girls in conflict-affected settings and strong determination to eliminate sexual violence and secure justice for all human rights violations experienced by women and girls. There is also growing recognition that women’s economic, cultural, political and social autonomy is a linchpin for a life free of violence, and that women’s empowerment is a key ingredient for democracy, stability and lasting peace. Yet, there are many miles to go to affect real and sustained change with regard to outcomes and results on the ground. The past year has been marked by increased violence, mass displacement flows and related humanitarian catastrophes. Women and children, particularly girls, have been affected by newly emerging violence. All of these developments have had a detrimental impact on progress and results achieved on peace, security, reconciliation and stability overall.”

Besides focusing on the fundamentals of life such as protection from violence, healthcare, food and nutrition, etc., the possibility of the sustainable economic emancipation of women in crisis areas rests on understanding the implications of education and, consequently, their inclusion in positive development activities.

According to Dr. Feras Hamza, Associate Professor and Program Director of International Studies at the University of Wollongong Dubai UAE, “I think generally, one should bear in mind two things; one, the constraints that organizations such as UNHCR might face regionally, in terms of countries adopting certain mandates and hence recognizing individuals as ‘refugees’ with all that this would entail in terms of legal protection that would normally be due to them (MENA is not the EU!); two, the issue of women in general. There is a double challenge here in this region: the recognition of ‘women’, and then the recognition of ‘the refugee’.”

Agreeing with Dr. Hamza and talking about education and how it can be encouraged among refugees and internally displaced women, Dr. Laura Voda, Adjunct Professor at the University of Wollongong, Dubai, UAE, says, “The most stringent problem that refugee populations are facing nowadays is status determination. Whereas the 1951 Geneva Convention and 1967 Additional Protocol define the legal concept of ‘refugee’, the status determination is highly dependent on the domestic procedures in the host state. As such and in order to offer a broader view on the complexity of the problem, we should include displaced populations, as well as stateless individuals. De facto, they face the same types of problems. In regards to MENA, the distribution of powers, legislative systems, security of political systems and of the social apparatus in general is heterogeneous in the region. In addition, most of these countries have not ratified the multilateral treaties on human rights or similar legal instruments, which makes determination, as well as its related legal protection, more difficult to achieve and more costly. Some areas, for instance, are so remote that the whole societal structure needs to be built from scratch (e.g. South Sudan).”

Adding, she remarks, “The approach in this case should be structural in the MENA region, as some areas in here face real humanitarian crises. A more ‘muscular’ form of action on the part of the international community (at the intergovernmental level, UN) in order to grant and secure humanitarian access, would be beneficial. In addition, the network of donors should be well-established in order to facilitate the assessment, training and staffing needed. In general, refugee camps have one instructor for around 70 individuals, which is not enough. From the legal/policy perspective, the humanitarian path remains the most appropriate, I believe. On the other hand, applying a set of lessons learned from relevant precedents, establishing local focal points for gender issues and education, establishing community services in order to facilitate the contact and, eventually, the integration of refugees into local schools would be beneficial. Last but not least, establishing partnerships with the local governments in areas such as immigration, grant of asylum, compliance with the non-refoulement standards, access to school, access to facilities – financial and logistical – pre and post the educational process… It is to be reemphasized that only a concerted action in the international community (with a higher level of support on the part of the developed states) would lead to palpable results.”

A first of its kind and devoted to protecting unaccompanied and separated refugee children and youth, Heshima Kenya is a non-profit organization that also focuses on supporting women and girls between the ages of 13 to 23 from Somalia, Ethiopia, DR Congo, Sudan, Rwanda, and Burundi.

The entity operates from Nairobi, Kenya and “provides shelter, education, vocational training, case management support, and advocacy to participants and their children who have experienced the detrimental effects of war, the loss of their families, and, in many cases, kidnapping, rape, trafficking, unlawful detainment, and torture.”

Heshima Kenya aims at creating an empowering social network for girls as well as young women in order to help them achieve economic self-sufficiency and become leading voices within their communities.  The organization was co-founded by two visionaries Anne Sweeney and Talyn Good in 2008 to establish a safe community especially for refugee adolescent girls who suffer the highest rates of abuse and exploitation.

The organization offers a number of programs including the Girls Empowerment Project (GEP) that “allows young refugee women and girls to access education and livelihood opportunities, learn about their human rights and to cultivate leadership skills.” Also providing onsite daycare facilities for young and new mothers, the program is planned in way to assist participants possessing various levels of learning, culture, languages and traumas in a unique classroom environment. With a persistently desperate need to provide girls at the Heshima Kenya effective tools protecting them from rape, forced marriage, prostitution, discrimination, at-risk pregnancies, slavery and HIV/AIDS, the organization wholeheartedly welcomes donations via Global Giving. Through such acts of kindness and beneficiaries’ participation, refugee women of Heshima Kenya are given hope to shift their course of lives for the better.

Indeed, development, peace and security all go hand in hand. Integrating refugee women and, most importantly, those internally displaced into society can only be possible if their needs are recognized in their entirety, and a process is initiated to meet those needs.

Unlike refugee women who may register with UNHCR and receive assistance from a range of humanitarian actors, internally displaced women remain within the borders of their own country and, thus, their national government is responsible for protecting and assisting them.

Analysts believe that internally displaced women also face uniquely harrowing challenges and require special attention as their own group. According to The Brookings Institute report entitled “Improving the Protection of Internally Displaced Women: Assessment of Progress and Challenges,” “Unlike refugee women who may register with UNHCR and receive assistance from a range of humanitarian actors, internally displaced women remain within the borders of their own country and, thus, their national government is responsible for protecting and assisting them. Women… face discrimination on many fronts, including housing, land and property, livelihood, documentation and education.”

Impact of education on women in afflicted areas

In an environment of affliction, education can have a highly positive affect on women, Dr. Voda opines, “One of the main purposes of education is empowerment. As such, some of the very negative situations that women refugees are facing could be curbed: human trafficking, sexual abuse, health and hygiene, reproductive health problems, low levels of literacy and, very important, facilitation of the reintegration process (being it in the home country or in a third country), along with income generation and psychological support. On the other hand, there’s a generalized stereotype in the international arena according to which refugees (and persons in similar situations) are negatively impacting the local communities in the host country. Education thus represents a method by which such situations could be solved and the reintegration processes may be facilitated in a concerted manner. Moreover, it facilitates participation and, ideally, it should dismantle the perception that women have by birth a different, inferior status in comparison to men.”

Through time immemorial, women have been systemically denied equality, autonomy and power. The reconstruction of society and communities is only possible with the integration of women to not only further the process of peace-building but also gender justice.

There is a silver lining as far as the current education situation is concerned, Dr. Voda concludes, “Obviously, initiatives exist. Both gender issues (in general the situation of women) and education are two core areas of the Millennium Development Goals, as well as part of an array of hard law and soft law documents, both at the UN level and within the ECOSOC specialized agencies. The most important issue to be highlighted in the particular case of MENA is the humanitarian crisis and the convergence of the humanitarian response to the specific problem of education. The success of any endeavor is highly dependent on the level of commitment in the international community, as well as on strong partnerships with NGOs, public entities and even with corporate environments worldwide.”

Through time immemorial, women have been systemically denied equality, autonomy and power. The reconstruction of society and communities is only possible with the integration of women to not only further the process of peace-building but also gender justice.

Understanding and addressing the specific needs of women refugees or those internally displaced can become a widespread reality. This can be achieved by not only including women in decision-making at all levels, introducing women-centric programs, and through the committed endeavor of all stakeholders including governments, host countries, NGOs and the private sector; but most importantly, by also bringing these afflicted women into the conversation. Listening to them, understanding their situation and incorporating their views are crucial to make ideal conditions tangible, and to ensure long-term success.

Improving Lives of the Stigmatised