Safeer Ullah Khan, Executive Director of Bedari – a Pakistani NGO working for the promotion and protection of human rights of girls, boys, women and other marginalized groups of society talks to Sabin Muzaffar about the organization’s pivotal role in combatting gender biases, inequalities and its mission to raise awareness about basic human rights. 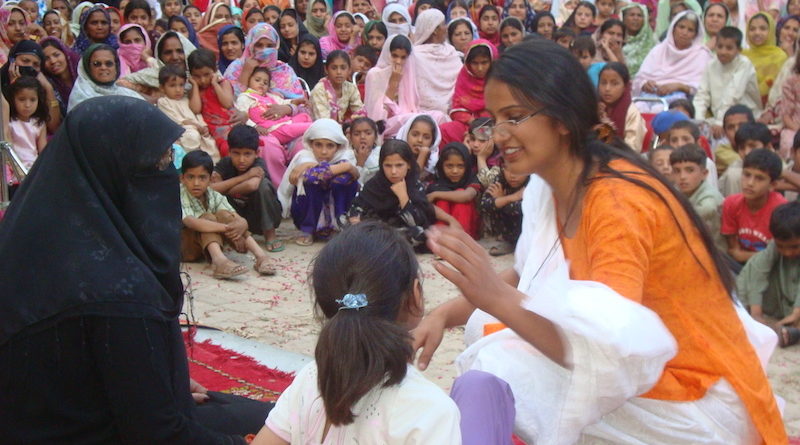 Tell us about Bedari – when and why it came into existence?

Bedari is a national level non-governmental, voluntary development organization in Pakistan working with women and children for the promotion and protection of their human rights. It was registered in 1992 under Societies Act 1860 to provide support to victims of gender-based violence, as it was noted that women had nowhere to go in case they faced violence at home.

The organization was Pakistan’s first crisis center for women survivors of violence. In the past 24 years, it has developed expertise on issues of gender empowerment, addressing violence against women and children and processes of attitudinal change.

Bedari started as a small organization with no regular staff. It relied entirely on the time and efforts of volunteers for the achievement of its objectives. It continued to work in this mode with only one office assistant working as full-time employee. The lawyers, psychologists, doctors volunteered their services.

Bedari supported around 1000 women in distress every year. As the demand from other areas grew, it became difficult to continue working with a large number of volunteers with fluctuating availability. Realizing the need, the organization formally employed a paid, full-time working staff that now has a support from a wide network of volunteers. We also began establishing partnerships with donors to execute various projects with specific objectives.

Discrimination and violence against women remain core subjects. However, we have expanded our wings to cover other areas affecting women’s condition in society. These include education, economic empowerment and formulation of explicit laws and their implementation to safeguard women’s rights. Moreover, the organization has expanded its geographic coverage from (the Pakistani city of) Rawalpindi/Islamabad to (other cities like) Chakwal, Muzaffargarh, Vehari, Multan, and Lahore (in the province of Punjab, Pakistan).

What is Bedari’s main focus?

Here at Bedari, we envision a society free of violence, where all citizens including women and girls enjoy basic human rights and equal status as human beings. We strive to promote peace and human rights of all in the society through capacity building, raising awareness, civic education and advocacy. Our goal is to raise awareness as well as building capacities around women’s human rights and peace.

Here at Bedari, we strive to combat gender-based inequalities by promoting sexual and reproductive health practices, through post primary level education for girls, economic and political empowerment of women.

We aim to provide immediate support to women survivors of gender based discrimination, violence and abuse; in addition to promoting peace and tolerance through revival of cultural activities and by engaging with young people both male and female.

Lastly, we have consistently advocated for appropriate policies and legislation for addressing gender based discrimination, violence and abuse.

Bedari started with a pilot project in 2006 by sending around 20 girls from Village Ransial (Tehsil Kallar Kahar of District Chakwal – Pakistan) to nearby secondary school. Bedari provided for their uniforms, shoes, books and travel. It was started with support from the Athens Network for Collaborating Experts (ANCE) – an organization founded in Greece. Based on the learning from the pilot phase, Bedari designed a more elaborate five-year long project in two villages. The number of girls grew from 20 to 30. It was a big success. There are 30 girls with secondary education in the remote village, and sending girls to secondary school has now become a norm. Now 35 girls are going to school without any support from NGOs. As a policy, we stop our program in one village after five years. Currently, we are sending another 101 girls to secondary school from four villages.

The reason we work on sending girls to secondary school is because primary education is usually easily accessible. Almost every village has a primary school. But for secondary education, girls have to travel to another village, which means additional cost of around Rs 2000 per month (US $ 20). This leads to a sharp decline in female enrolment after primary education. Bedari intervenes by providing traveling cost to the vulnerable girls.

Bedari supported around 1000 women in distress every year. As the demand from other areas grew, it became difficult to continue working with a large number of volunteers with fluctuating availability. Realizing the need, the organization formally employed a paid, full-time working staff that now has a support from a wide network of volunteers. We also began establishing partnerships with donors to execute various projects with specific objectives.

As these girls study in public sector schools, which are not very good as far as quality of education and personal growth of the students is concerned, Bedari has added Self-Growth Sessions and Exposure Trips to the program to compensate for the weaknesses of the public sector education system.

What significant challenges has Bedari faced so far?

I think the biggest challenge is the overall patriarchal mindset as gender-based violence has such high acceptability in society. It has been internalized not only by men but also women; thus making it really difficult to raise voice for female victims. It is an enormous challenge; male relatives are usually gender insensitive and resort to violence. As a consequence women have nowhere to go. They are usually advised by parents to bear with the situation.

If, for instance, a woman looks towards government support, no institution provides her with help or assistance. Police officials, lawyers, local judges … everybody would advise her to take the case back, and return to her husband. It is the same story with policy-makers as well. When we take up issues with legislators, only a handful of lawmakers out of 371 (in the province of Punjab) are interested in the issues relating to women and girls. The patriarchal mindset becomes a big hurdle in introducing woman-friendly or women protection laws.

Education system also reeks of gender bias. The curriculum is gender insensitive and is taught by those with deeply entrenched hegemonic attitude; which means biases are being systemically transferred to new generations, so we should not expect any worthwhile change in the near future.

The society and state institutions are suspicious of NGOs. People think ‘women rights’ is a Western agenda. State institutions are particularly unhappy with organizations that have adopted rights-based approach. Currently, the NGOs are required to re-register themselves, and need to get a No Objection Certificate (NOC) for each project from relevant district administration. If a project is to be implemented in more than one district, the NGO has to seek NOC for each district separately. Religious leaders are also against NGOs. So we have to fight on many fronts.

In recent years, security has become a major challenge. Many NGOs have been attacked in the past 10 years, and Bedari staff keeps receiving threats especially those engaged in providing direct support to female victims of gender based violence. We often have to close our offices, send our staff underground, and keep a very low profile. It becomes really difficult to work in such circumstances.

What do you consider the organization’s biggest achievement(s)?

I think it is a very big achievement that Bedari has not only survived in such difficult and debilitating conditions, but also managed to expand its operations to many other districts. Bedari has provided direct support to around 25,000 women including legal aid, counseling, referral, and medical support.

Bedari introduced the concept of modern Shelter Homes, which was adopted by the government. Currently, the Shaheed Benazir Bhutto Women Centers are modeled along the lines of Bedari Shelter Home. (Bedari is no more running shelter homes of its own). Bedari has remained on forefront of all campaigns pertaining to women-friendly laws. The organization was a founding member of Alliance against Sexual Harassment at Work Place (AASHA), which was established in 2001, and it succeeded in getting anti-sexual harassment laws passed in 2010.

Currently, it is spearheading the campaign for stricter and more comprehensive laws to ban child marriages in the province of Punjab. It has held consultations and drafted a new law, which has been shared with the Punjab government. Unfortunately though it has yet to see the light of day!

On Women and War