Ending the Darkness of Violence in Kenya 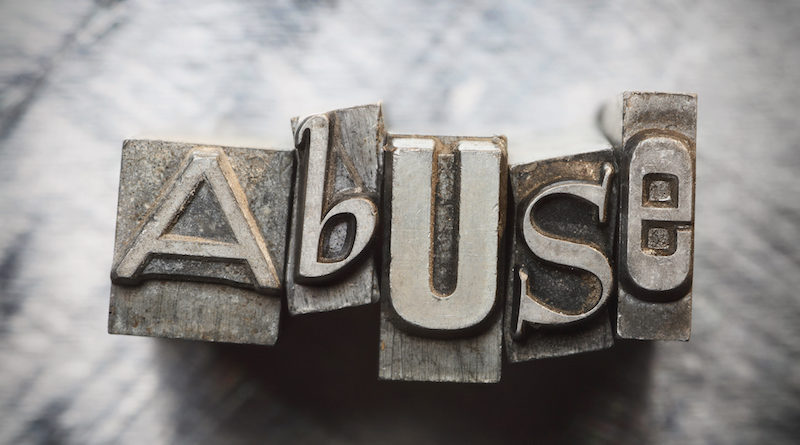 Is an organization based in Kenya that engages teens in addressing community challenges, in order to help them develop into young change agents. The Teens Weave stars project is a campaign aimed at helping end Gender Based Violence in Kenya. The concept came into existence as a result of our interactions with teens at TAP Africa, where we realized that most of them were affected by Gender Based Violence (GBV), yet they had never gotten a platform to talk about it. As a result, many of them suffered effects of trauma evidenced by poor performance, withdrawal, violence in school, lack of concentration, and mistrust, among others. This program, therefore, aims to equip girls and boys with knowledge about GBV while giving them some of the skills necessary to champion positive change.

The key team facilitators who continue to work hard to make this programme a success include Gladys Muthara; the founder working with a vibrant team which includes Susan Waruingi, Sofina Merinyo, Frida Ndoro, Antony Ngatia and Corazon Amukhale. 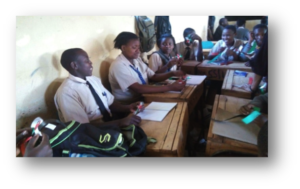 The initiative’s envisions that participants will not only be able to face and address GBV issues affecting them today, but also enable them to help break the cycle of violence when they grow up.

Gender Based Violence is a stubborn boil that refuses to leave us for good. According to UNiTE, up to seven out of 10 women around the world experience physical and/or sexual violence at some point in their lifetime. In Kenya, four out of 10 women experience violence, yet many cases go unreported. In most cases, children witness violence either at home or in the neighborhood. To help champion an end to GBV and its serious effects on children, this campaign directly engaged 500 teens in four regions of Kenya. Through the Teens Voices against Violence (TVAV), 1000 teens will also engage in educating adults about causes and effects of GBV on children, with a focus on Domestic Violence. These participating teens will apply storytelling, poetry, and skits performance to highlight and also break gender stereotypes and narrate their experiences of violence to parents and other adults, in public spaces, radio, TV, and social media platforms. 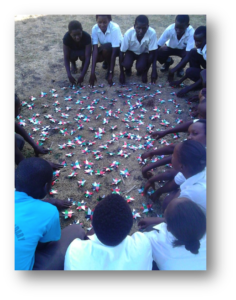 Through TAP Africa, girls and boys engage in weaving stars to light up the darkness of violence in their lives through love, light, and hope.

Considering the sensitivity of this topic, participants participte in the fun activity of weaving eight pointed stars, which offer a less tense moment for them to learn and hold guided conversations about their experiences of violence. During the seven week-sessions interaction, participants are also taught how to tell their stories of violence through poems and story-writing, in the simplest way possible. Our facilitators engage them in guided discussions and learning about causes, gender stereotypes and discrimination, warning signs, creating respectful relationships, as well as preventive measures of GBV.

It has been almost twelve months since you began your star weaving project. In those twelve months how many youth have you reached?

The truth is, the journey has been both challenging and rewarding. We are proud to say that we have been able to have a close interaction with almost 1000 teenagers in four counties of Kenya; Nairobi, Machakos, Kirinyaga, and Mombasa.

Who has collaborated and worked with you on this project?

We have partnered closely with VSO/ ICS Alumni, TAP Africa volunteers, LOHYI Volunteers, and Community volunteers. The different school systems also played a huge part in supporting the project. School heads were key in highlighting the importance of our activities and providing resources such as venues and other help.

How many stars have been weaved since the project began?

So far we have successfully weaved 9,500stars, and our volunteers continue to weave using remaining materials. However, for us it was not only about weaving stars, but also being able to create an impact on the students and positively influence their lives throughout the activities. Therefore, our sessions would start with learning from facilitators and holding guided discussions about GBV, then, conclude with weaving stars.

What are the outcomes you have achieved with this project, you could discuss both the positive aspects and any challenges faced? 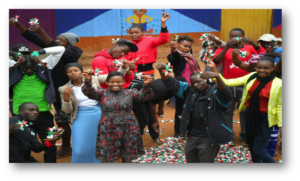 The major achievement is how we have addressed the issues of gender-based violence among young teenage boys and girls. Students recounted how GBV has affected them, especially at home, and by providing a listening ear we would enable them to start their journey of healing as well as be able to cope up with Violence behind closed doors. We were also able to help the teens change their attitude and have respect for the opposite gender through training and discussions on gender stereotypes & discrimination. In addition, we got to address other challenges facing them as teenagers and offered peer to peer advice. We measured the impact achieved through questionnaires and behavior change observation. School’s support teams gave us great feedback on the relevance of the project to the development of the teens. Individual students also expressed their appreciation for the programme.

Have the teens enjoyed participating in this project?

It has been a great joy working with the teenagers. What often gave us immense pleasure as facilitators was finding students anxiously looking forward to the new session. Teens’ attendance during star weave workshops, the enthusiasm of the selected leaders to mobilize their peers, and the level of participation in star weaving, were all very overwhelming. Initial star weaving trainings were always a bit of a challenge, but some students would really learn fast, thereby teach their colleagues.

Do you feel you achieved what you originally set out to do? 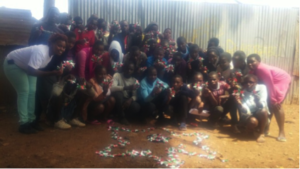 We have achieved what we set out to do. Our plan has been very strategic with follow up meetings and monitoring to check on the progress of the programme. The simple Facilitation Guide greatly helped us to deliver what we had intended, to the teenagers. We also appreciate the schools’ administration because they really supported us by allowing us to work with their teens, as well as making adjustments in their school programs so that we could engage their teens. Key to us was creating that individual impact on the teens in issues of GBV. We gave them a platform to share dark stories of their experience with violence, created moments for bonding, as well as shined bright light on their lives through weaving stars.

Financial constraints were, however, a major challenge that saw us delay some activities, thereby, not cover as many schools and regions, as we would have wanted.

Sending your stars to Australia for the Commonwealth Games is going to be amazing, how do all the participants feel having their work displayed?

Our teenagers are very excited. We decided to use red, black, white, and green ribbons in weaving stars, because they are our country’s national colors, and we are hopeful that some of our athletes, who’ll be participating in the Commonwealth Games, will see them and feel proud and patriotic as Kenyans. We are so excited that teens in Kenya weaved the stars, because this means a brighter Kenya with reduced cases GBV in future. We eagerly look forward to seeing the massive display of 1 million stars.

We participated in a cause, bigger than us, and we are proud to be the Little Humming Birds of Africa, who are using their small beaks to put out the fire of violence in the world.