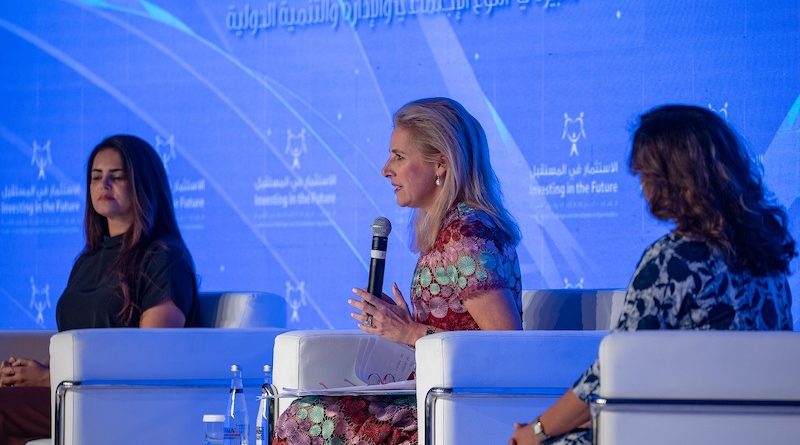 Social norms and practices hindering young women from reaching their potential in MENA was highlighted as one of the main impediments to the region’s developmental aspirations, at a panel discussion organised on the inaugural day of the third edition of the Investing in the Future (IIFMENA) conference recently held in Sharjah, UAE.

Held under the patronage of His Highness Sheikh Dr. Sultan bin Muhammad Al Qasimi, Member of Supreme Council, Ruler of Sharjah and Her Highness Sheikha Jawaher bint Mohammed Al Qasimi, wife of His Highness, Chairperson of the Big Heart Foundation and UNHCR Eminent Advocate for Refugee Children, the biennial IIFMENA event focuses on humanitarian and development challenges in the MENA region.

Based on the theme for this edition, ‘Youth – Crisis Challenges and Development Opportunities’, the session named ‘Social Norms and Practices Hindering Young Women Reaching their Potential’, organised in partnership with NAMA Women Advancement Establishment and UN Women, shed light on the plight of women in the region and around the world as they continue to face discrimination at various levels – social, economic and political – and stressed that young women are even more marginalised in areas affected by war and crisis.

Ms. Hewitt opened the session by discussing empowerment and the need for women to have the same opportunities as men. “Since the late 1980s we have been talking about women’s empowerment, and despite technological advancements, we are still having to discuss equal rights for women. This has to change,” she said.

Hewitt then outlined the ‘Seven pillars of women’s empowerment’, which espouse the following: To establish high-level corporate leadership for gender equality; to treat all women and men fairly at work – respect and support human rights and nondiscrimination; to ensure the health, safety and wellbeing of all male and female workers; to promote education, training and professional development for women; to implement enterprise development, supply chain and marketing practices that empower women; to promote equality through community initiatives and advocacy; and, measure and publicly report on progress to achieve gender.

“Since the late 1980s we have been talking about women’s empowerment, and despite technological advancements, we are still having to discuss equal rights for women. This has to change,”

The above would prove essential for gender equality, added Hewitt.

Panelist Aslan spoke about Jordan’s recent success in promoting women’s economic rights in the country – a move that led to several amendments to its draft labour law, including the introduction of a two-day paternity leave for fathers, ensuring that workplace owners establish daycare for their employees if the total number children their employees have exceeds 15, and introduce pay parity laws.

She said: “This success was an outcome of social dialogue, community organising, listening sessions, family economics, data and research.”

The introduction of flexible working arrangements, shared jobs and compressed weeks, and also aiding women’s reintroduction into employment, following time off due to childbirth were highlighted as being essential in a country’s infrastructure that can be called fair and equal.

Dr Al Sharekh presented the Kuwaiti experience, saying her aim is to run a longer conversation on violence against women in the country and give them better representation in society, governance and economy.

Transportation and planning development were also highlighted as an area that needs to be addressed when it comes to gender equality in the workplace.

“What kinds of mobility needs do women have? What are the limitations they face with time constraints? This all needs to be taken into consideration if we are to see women fully-integrated into society, with the same opportunities being made to both women and men,” Ms Uteng remarked.

The session concluded with Ms Hewitt quoting Nobel Prize laureate and advocate Malala Yousafzai: “I raise up my voice – not so I can shout, but so that those without a voice can be heard…we cannot succeed when half of us are held back.”