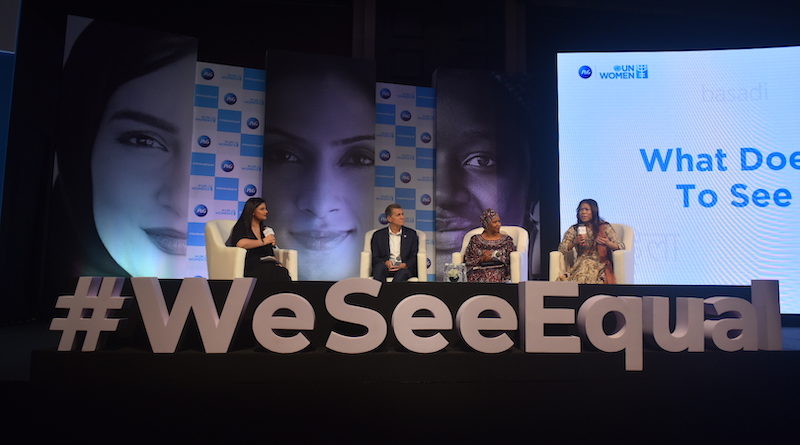 February 19th, 2019, Mumbai (India):Procter & Gamble (P&G) today announced a new commitment around a number of initiatives that will promote gender equality across the Indian Subcontinent, Middle East and Africa (IMEA) region. The declaration, which was made by P&G’s IMEA and APAC President, Magesvaran Suranjan during the company’s inaugural #WeSeeEqual Summit in partnership with UN Women in Mumbai, is part of the company’s citizenship focus on being a Force for Good and Force for Growth.

“Gender equality is a core belief at P&G.  Creating a world free of bias with equal representation and equal voice for everyone is both the right thing to do and the right business choice.” explained Magesvaran Suranjan. “We also want to spark conversations and change mind sets as champions for the cause of gender equality across the region. We will leverage the full strengths of our business and operations, and our advertising voice to tackle gender bias and encourage women’s economic empowerment.”

Over the next three years:

Co-hosted with UN Women, P&G’s first IMEA #WeSeeEqual Summit brought together business and government leaders, and influencers to share inspiration and surface insights around the myths that prevent us from accelerating our progress for gender equality.

Dr. Phumzile Mlambo-Ngcuka, Under-Secretary General of the United Nations and Executive Director of UN Women, said “To get irreversible progress in gender equality takes sustained, intentional action. We need to work together on this wherever those inequalities are present – in schools and offices; in the media; in sports arenas, farms, factories and houses of parliament. We’re driving for practical changes, like supply chain agreements that bring good business to women-owned companies, at the same time as we change the narratives about the place and power of girls and women in society – so they are both seen and treated as equals.”

P&G has been steadily working to improve gender equality by leveraging its unique strengths. Some of P&G’s achievements globally and in the region include:

In the Gulf, P&G has been a proponent in promoting active discourse on gender equality, both within the organization as well as with communities across the region. P&G hires an equal ration of women and men in Dubai, for its operations as its regional headquarter. P&G was the first FMCG Company in the Kingdom of Saudi Arabia to obtain a license to employ women, with 20% of its leadership team comprising of Saudi female nationals. The company is promoting positive perceptions of change through its advertising voice; released last year, Always ‘Saudi Generation of Firsts’ campaign was the first to be directed and produced only by women. P&G is supporting wider efforts to ensure that we move the issue of gender to the top of the region’s priorities in 2019 and beyond.

“We believe that by playing our part in areas such as #WeSeeEqual Summit and taking an active role both within the company and outside will collectively help move forward our shared vision of empowering equality in IMEA and the world,” concluded Suranjan.

Let’s Elevate our Thinking with Art