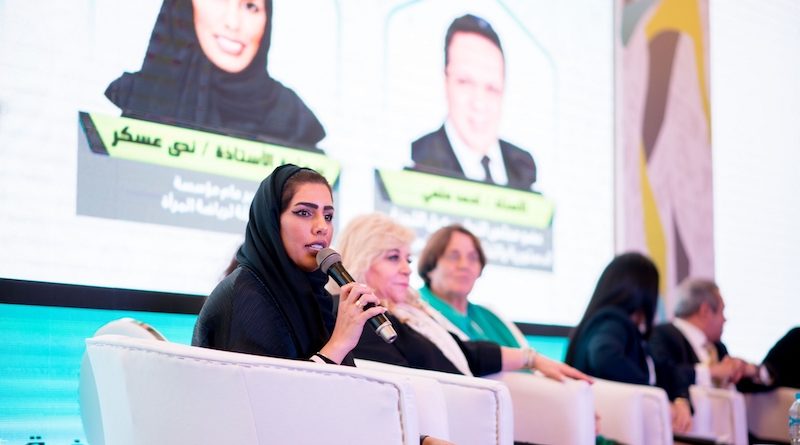 During HE Nada Askar's participation at the International Conference on Arab Women’s Sports in Cairo, Egypt.
by ANANKE April 7, 2019

As part of its continuous mission to support and advance women’s sports in the Arab world, the Sharjah Women’s Sports Foundation (SWSF) highlighted the emirate’s milestones under the ambit of the UAE and Arab female sports, during its participation at the first International Conference for Arab Women’s Sports in Cairo, Egypt. This was organised on March 28-29, by the Egyptian Sports Association, under the patronage of the Egyptian President Abdel Fattah El Sisi.

During the conference titled ‘Challenges and Opportunities’ which was attended by HE Dr. Ashraf Subhi, Minister of Youth and Sports, Chairperson of the Executive Office of the Council of Arab Ministers of Youth and Sports, and prominent officials of sports institutions from the Arab world, SWSF, noted that the numerous sporting events to be held in Sharjah are  supported by Her Highness Sheikha Jawaher bint Mohammed Al Qasimi, wife of His Highness the Ruler of Sharjah and Chairperson of SWSF, to nurture an environment, where women can think of fulfilling their aspirations and ambitions in the field of sports.

HE Nada Askar Al Naqbi, Director General of SWSF, emphasised during a keynote speech that Sharjah will spare no effort to support Emirati and Arab sportswomen, in order to reach regional and international sporting venues and claim the top spots that will brings honour to their countries.

The SWSF Director General explained that the development projects in the UAE in general, and the Emirate of Sharjah in particular, are not  limited to the advancement of women’s sports in the UAE alone but play  played an active role in promoting the participation of female athletes, in various world events and conferences, that seek to raise awareness about the importance of women’s sports.

On the sidelines of the conference, SWSF organised a press conference where they announced the details and goals of the fifth and the largest edition of the Arab Women Sports Tournament (AWST 2020), which will take place in Sharjah, in February 2020. Al Naqbi highlighted the preparations and plans made  by the higher organising committee to host the region’s first ever sporting event, in terms of number of participating clubs, which also witnesses a considerable number of Egyptian female athletes.

During HE Nada Askar’s participation at the International Conference on Arab Women’s Sports in Cairo, Egypt.

HE Nada Askar Al Naqbi, commented: “What brings the Emirate of Sharjah and Egypt is not just sports. We have a long-standing bilateral relationship in various  fields, that goes back a long way. We are here today to reaffirm our ongoing partnership in women’s sports, with Egyptian sports bodies and institutions.

“She further said: “SWSF is on a continuous mission, under the guidance of Sheikha Jawaher to create and sustain a nurturing environment for female athletes, to reach new heights and achievements that will fulfil their aspirations and dreams, and to prove that women can reach and achieve the top spots, if provided with the necessary support”.

During a presentation, Al Naqbi highlighted that SWSF’s players represent the UAE in regional and global sporting arenas in a variety of disciplines including fencing, archery and equestrian sports, show jumping competitions, and more. She also highlighted that SWSF is the first entity dedicated to women’s sports in the UAE and the Middle East, and the only one to organise a professional women’s sports competition on the pan-Arab level – the Arab Women Sports Tournament (AWST). 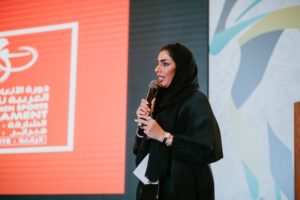 During the AWST 2020 Press Conference in Cairo.

Al Naqbi revealed the number of awards and honors received by the SWSF since its formation, and highlighted achievements of the foundation’s teams and players in local and Arab competitions. She also highlighted the great accomplishments of female Egyptian athletes in AWST over the past iterations, which consisted of 28 medals. In the fourth edition which was held last year under the theme ‘The World Is Your Court – Together Victorious’, Egyptian athletes bagged 9 golds, 3 silver and one bronze.

They discussed avenues of cooperation between the SWSF and the committee, as well as a number of topics and issues that lead to  the advancement of Arab women’s sports.

Bridging the Gap Through Gender Data