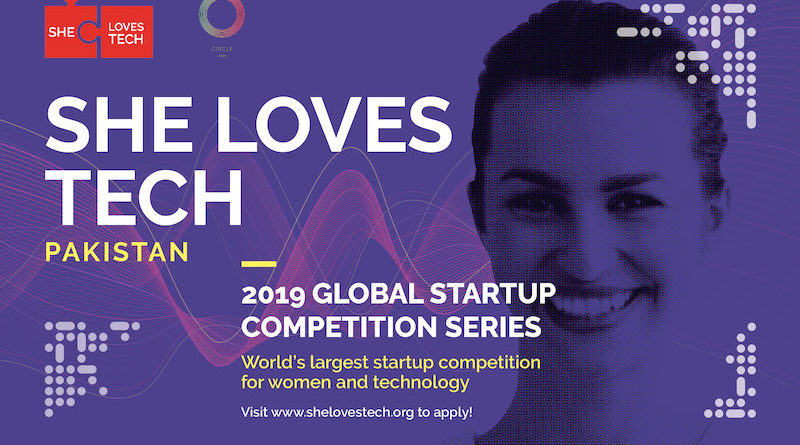 CIRCLE, a social enterprise focused on women’s economic empowerment and inclusion, has officially started acceptingapplications for its She Loves Tech, Pakistan competition – a national event that will culminate in She Loves Tech 2019 Global Startup Competition. In its third year, Circle partners with  She Loves Tech to identify, support and fund the next generation of tech startups tackling global challenges. With the massive success it achieved last year in Pakistan, 2019 will see it return for another round.

She Loves Tech is a global platform committed to building an ecosystem for technology, entrepreneurship and innovation that creates opportunities for women and which houses the world’s largest tech startup competition focused on women-led or women-impact businesses. The startup competition officially kickstarted in 2015 and has so far received 1000 global startups, 1200 Media features, one million live audience and 500 million Media impressions. This year, She Loves Tech 2019 Global Startup Competition is expanding to 20 countries.

The Pakistan Chapter of She Loves Tech kick-started in 2017, out of the ingenuity of the Founder of Circle; Sadaffe Abid. Last year, over 100 registrations with 10 finalists were selected for the national-level finals. The competition was hosted in three local rounds: Karachi, Lahore and Islamabad with the national final round being held in Karachi.

This year, the Pakistan Chapter will be expanding to two new cities; Quetta and Abbottabad, in addition to Karachi, Lahore and Islamabad, in order to create a robust ecosystem at the grassroot levels by providing them with networking opportunities and a global platform where they can showcase and accelerate their startups.

Sadaffe Abid, founder of CIRCLE and former CEO & COO of Kashf Foundation, who brought the competition to Pakistan in 2017 said: “We need to create more opportunities for women to come forward, set up businesses, experiment and take risks. For Pakistan’s prosperity, women have a key role to play. I would also like to see more women investing in Pakistani startups.” CIRCLE aims to encourage women’s visibility and inclusion in the economy thus, She Loves Tech is a unique opportunity to spotlight women innovators.

Saba Khalid of Aurat Raaj; She Loves Tech Pakistan 2018’s winner who advanced to the Global Finals in Beijing, encourages future participants with the following words;  “Being on that stage and representing Pakistan, having the chance to represent Pakistan, really pushed me, inspired me, motivated me. I’d like to say to anyone who is building something which is for impact or which demonstrates its women empowerment potential to put their idea into the competition. It could be small and have minimum impact right now but if you believe it could impact a lot of lives, put it in the competition. Don’t feel insecure about your idea. Just put it out there and see what happens.”

Participants  will have the opportunity to pitch their innovations and ideas in front of a large audience, to showcase their creations on an International stage and enjoy valuable promotion and visibility for their startups, and get a chance at winning cash prizes by emerging one of the three winners at the local final level.

Winners in the local round will embark on a fully-funded trip to Beijing, China, get an opportunity to pitch on an international stage and attend the She Loves Tech 2019 international conference. They will also get an opportunity to participate in a high-level boot camp including workshops and company visits to Baidu, Xiaomi and other leading tech companies. As a bonus, they will get the opportunity to meet with investors from around the globe and a chance at wining a $15,000 equity-free cash prize.

It is also open to Startups that meet at least one of the following criteria;