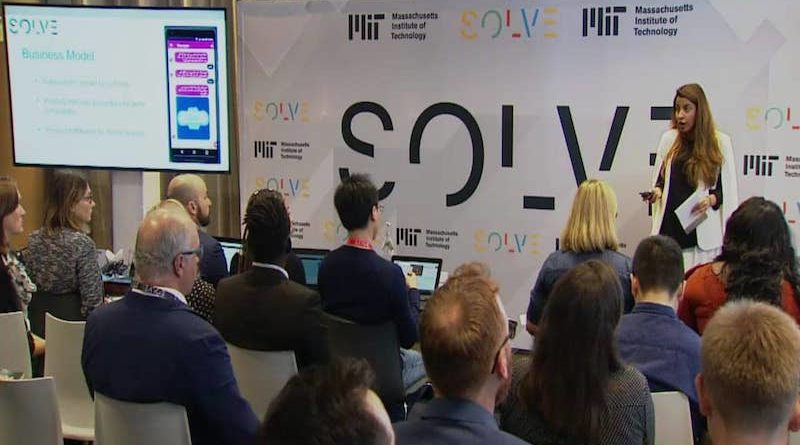 MIT Solve, an initiative of the Massachusetts Institute for Technology, had earlier announced the 32 new Solver teams from 16 countries selected at the Solve Challenge Finals, the premier live pitch event. The incoming Solver class was selected by Solve’s expert judges and was selected from a pool of nearly 1,400 applicants from over 100 countries, tackling four Global Challenges: (1) Circular Economy, (2) Community-Driven Innovation, (3) Early Childhood Development, and (4) Healthy Cities.

Solve issues four Global Challenges each year to find the most promising Solver teams who will drive transformational change. Solve then deploys its global community of private, public, and nonprofit leaders to form the partnerships these Solver teams need to scale their impact.

Prior to the Finals, Solve’s Executive Director, Alex Amouyel had stated:  “We are thrilled to welcome our new class of 32 Solver teams—innovators bringing groundbreaking tech-based solutions to tackle four of the most pressing global challenges. Over the next nine months, the Solve staff will work closely with each Solver to build partnerships across the Solve community and help source the funding, mentorship, and support they need to scale their solutions.”

With the tagline, ‘using AI to educate girls from developing countries on reproductive health and providing access to products, services and professionals’, RAAJI was awarded the first ever MIT-SOLVE Innovation for Women Awards by Vodafone Americas Foundation. 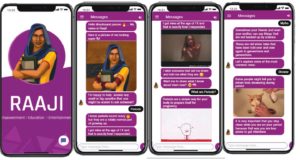 Adding, the company officially stated: “At the Vodafone Americas Foundation, we believe that by investing in the combination of women and technology, we are investing in change and the ability to make a true social impact globally. The winners of the 2019 MIT Solve Innovation for Women Prize epitomize the solutions we champion in using technology to enrich the lives of women and girls around the world. We’re honored to be able to support each of these winners on their mission and we can’t wait to see what they do next.”

One of the three recipients of the $75,000-award, Raaji strives to create positive impact on ‘the health of millions of girls in many countries as each user’s content can be contextualized for multiple languages and connected to SMS in cases of internet unavailability.’ The Chatbot’s primary goal is to offer access to information regarding health and hygiene, education, family planning and other related services to women and girls living especially in the slums or under privileged areas who are disproportionately affected by lack of access to education, resources and more. Raaji’s core team consists of Founder, Saba Khalid, CMO Sehar Palla, Software Engineer, Muqadar Ali Jamali, Technology Lead Jaya Rajwani.

Aurat Raaj, the primary digital content platform was launched in 2017 and went on to evolve and currently also includes an award-winning animated series featuring Raaji as lead protagonist and the AI chatbot by the same name. Aurat Raaj has been hailed by tech gurus as a groundbreaking initiative and femtech lady bosses such as Ida Tin, had commented about how Pakistani chatbot Aurat Raaj, founded by Pakistan journalist Saba Khalid, educates girls about taboo topics also inspiring them to take up activities such as entrepreneurship, cycling, boxing, self-defense.

The initiative has won some of the most prestigious awards, including the most coveted tve Global Sustainability Film Award at the BAFTAs for their animated series ‘The Ultimate Survivor’ as well as being the finalist for the IndexAward. 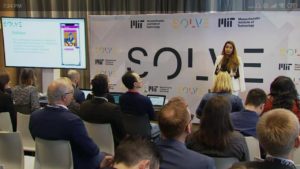 Founder of Aurat Raaj and Creator of RAAJI, Saba Khalid at the SOLVE Challenge Finals 2019

Talking about the journey and the massive hurdles along the way specifically being part of Pakistan’s entrepreneurial landscape, Saba Khalid spoke to Ananke’s Sabin Muzaffar: “With this win, I wanted to talk about something that I am sure many can identify with. It is how I have killed myself to find local validation for a year. I even entered a high profile accelerator and yet nothing. And then I come to the US and MIT, one of the most prestigious names in science and technology. They looked at our model and they validate it! We now have Vodafone wanting to scale Raaji for other countries. Incubators and accelerators are clamoring to take us on without an application process. It is lamentable to even wonder why we are neither being appreciated nor given resources in Pakistan, our beloved country for which we are trying to innovate and create far reaching social impact? Many of these accelerators and their mentors have no idea about the value of social entrepreneurship and how they inadvertently demoralize young people.”

Adding she said: “One of the key things I did when I realized I wasn’t getting quality mentorship was to reach outside. Tech and persistence made it possible for me to be coached personally by people like Ida Tin and Christian Ehl. I think there’s an unhealthy quality many successful people in Pakistan have and that is to hoard learning opportunities and possibilities for themselves. We are a young team but each and everyone of my team has already attended a fellowship on our behalf. Fellowships that allow them to become social entrepreneurs on their own even if they leave Aurat Raaj and they have brought learning back, immensely contributing to us. Ali Abbas from our team attended the IFA cross culture fellowship, Waqar J Khan has attended the Do School and even our intern Suha Lalani is currently attending Ryerson on a scholarship. I have made sure people who have trusted me continue to grow, learn and become leaders in their own capacity. Personally, I have made a mission to hire the most diverse set of people and hope to continue doing that in future as well.”

Based in the Southern city of Karachi, Pakistan, Raaji is a hybrid of For-profit and Non-profit and tackles social as well as health issues through smart, non-judg mental and cost effective approaches.

The Rise of Female Workspaces