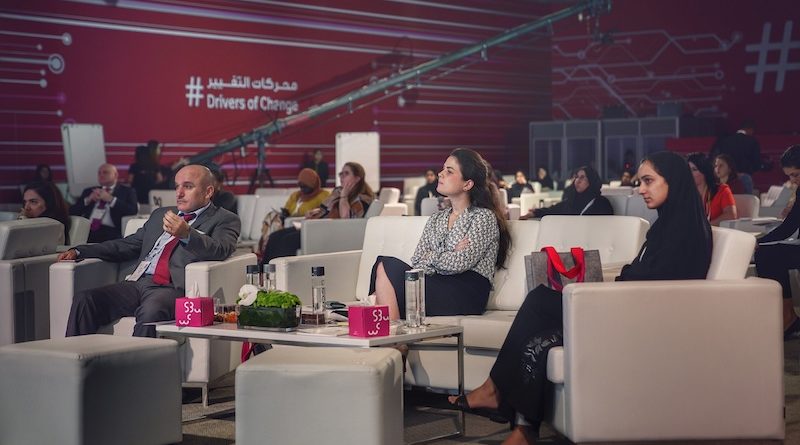 During the unveil of the survey titled “Women in the Economy: The Gulf Region Outlook” at WEEGS 2019
by ANANKE December 16, 2019

December 16th, 2019, Sharjah (UAE): Businesses across the Gulf Region are increasingly striving to empower women in the workforce, but key challenges persist and require immediate addressal to leverage the full power of women, according to newly unveiled survey results by the Pearl Initiative and NAMA Women Advancement Establishment (NAMA).

The survey, titled “Women in the Economy: The Gulf Region Outlook”, was conducted by the Pearl Initiative in partnership with NAMA Women Advancement Establishment (NAMA) over the past year. It was conducted across 11 sectors in five Gulf Region countries and asked respondents about key practices and policies that organisations can adopt to support women’s career ambitions.

Results of the diversity in business survey highlight positive initiatives taken by businesses in the Gulf Region, with more challenges ahead to be transformed into opportunities

The survey results revealed that 79 percent of men and women surveyed in the Gulf Region acknowledged that their respective organisations are increasingly initiating and executing programmes that empower and advance women in the workforce, while 77 percent of respondents confirmed their belief that both genders are being afforded the same benefits within their companies.

The survey results were unveiled at a special workshop organised as part of the second edition of the Women’s Economic Empowerment Global Summit (WEEGS), which took place at Al Jawaher Reception and Convention Centre.

The workshop was presented by Zina Janabi, Director and Middle East Women in Business Leader at PwC Middle East, and was attended by Yasmine Omari, Executive Director of the Pearl Initiative and over 100 attendees from across the region.

HE Reem BinKaram, Director of NAMA Women Advancement Establishment, stated: “The results of the survey very clearly make the case for gender equity at the workplace. The imperative is clear, both morally and financially. The commercial case for change is as compelling as the moral one. Women represent an underutilised talent pool in an increasingly talent-constrained environment. Additionally, decision-making effectiveness in organisations is improved by a diversity of perspectives. It is especially true in a global economy, where women increasingly drive a large segment of consumer activity.”

Reiterating the growing importance of the survey findings, BinKaram said: “Evidently the Gulf Region is playing a positive role in the career advancement of women. Through this research, we seek to understand what more can be done to expand on this development and communicate impactful messages to organisations in the UAE and the world.”

She added: “NAMA’s role in its second partnership with the Pearl Initiative is in line with our mission and vision to present and support businesses in the UAE and the region with innovative solutions that increase women’s professional advancement opportunities, leading to a revaluation of their work and harnessing a leading work-life balance framework.”

Yasmine Omari explained: “This marks our fourth report on gender diversity within businesses in the Gulf Region. Our research has clearly shown that adopting a positive and more inclusive culture within the workplace to support women can play a major role in supporting new initiatives that can make business environments more efficient and productive. The research has also helped us identify the steps that companies can take to improve women’s career and leadership prospects, as well as to pinpoint concrete solutions to advance gender diversity in the workplace. A focus for our work over the next year is to develop actionable strategies that can be implemented by regional organisations, while also focusing on the imperative for broader diversity in today’s businesses.”

On her part, Zina Janabi said, “Our commitment to driving the diversity and inclusion agenda extends beyond our daily practice at PwC Middle East and our partnership with the Pearl Initiative is a testament to that. Boosting the number of women in the workplace is not just a moral imperative but also has a measurable impact on the bottom line. Our recommendations come into play when analysing the findings of the Pearl Initiative’s report, Women in the Economy – The Gulf Region Outlook”, when earlier this year we released the ‘Women in Work – Insights from MENA’ which aims at helping policymakers in the public and private sectors create tailor-made initiatives to foster diversity.”

Founded in 2010, the Pearl Initiative is a Gulf business–led non-profit organisation promoting a corporate culture of accountability and transparency as key drivers of competitiveness and sustainable economic growth across the Gulf Region. The organisation develops programmes and publishes regional research reports and case studies to promote the implementation of higher standards of corporate governance amongst business and student communities across the Gulf Region.

About the Pearl Initiative:

Prominent business leaders from across the Gulf Region formed the Pearl Initiative in 2010 to create a non-profit vehicle for the Private Sector to collectively take the lead in adopting higher standards in corporate governance, accountability and transparency to enhance business innovation, opportunity and value creation.

With over 40 regional and international partners, the Pearl Initiative brings together business, government and civil society decision-makers to share best business practices and to help maximise the economic opportunities available to companies within the region. The Pearl Initiative also supports Gulf-based university students to identify and embrace strong ethics as they embark on their future careers.

Be The Change To Empower Woman