The COVID-19 crisis has broken down cultural barriers, giving way to significant social momentum towards systemic change for a more sustainable and equitable world. 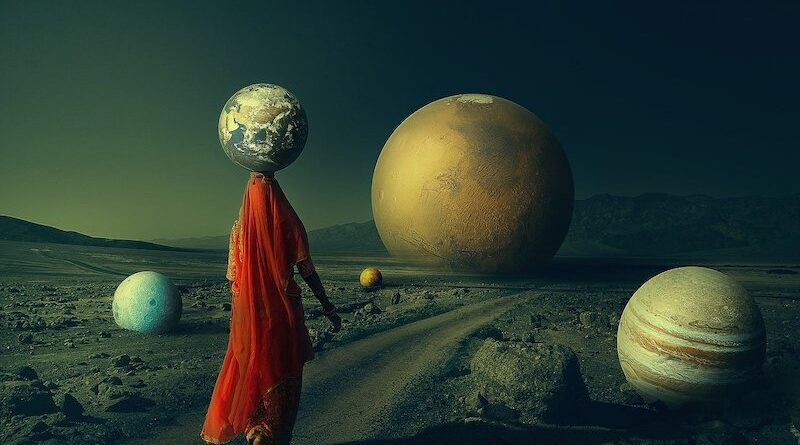 Geneva, 16 September 2020 — In a new World Economic Forum-Ipsos survey of more than 21,000 adults from 28 countries nearly nine in ten say they are ready for their life and the world to change.

72% would like their own lives to change significantly and 86% want the world to become more sustainable and equitable, rather than going back to how it was before the COVID-19 crisis started. In all countries, those who share this view outnumber those who don’t by a very significant margin (more than 50 percentage points in every country except South Korea). Preference for the world to change in a more sustainable and equitable manner is most prevalent across the Latin America and Middle East-Africa regions as well as in Russia and Malaysia.

Next week’s World Economic Forum Sustainable Development Impact Summit will address the achievement of the sustainable development goals and the appetite for transformation which will drive the “decade of delivery”.

Clear majority ready for a more sustainable and equitable world

Globally, 86% of all adults surveyed agree that, “I want the world to change significantly and become more sustainable and equitable rather than returning to how it was before the COVID-19”. Of those, 46% strongly agree and 41% somewhat agree, while 14% disagree (10% somewhat and 4% strongly). 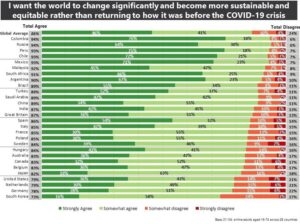 Dominic Waughray, Managing Director, at the World Economic Forum said, “The Great Reset is the task of overhauling our global systems to become more equitable and sustainable, and it is more urgent than ever as COVID-19 has exposed the world’s critical vulnerabilities. But the technology to transform things tends to outpace the human will to change. In six months, the pandemic has systematically broken down this cultural barrier and we are now at a pivot point where we can use the social momentum of this crisis to avert the next one.”

Across all 28 countries, 72% want their lives to change significantly rather than returning to what it was like before the COVID-19 crisis (30% strongly and 41% somewhat) while the other 29% disagree (21% strongly and 8% somewhat).

Latin America stands out for its optimism, with Mexico, Colombia and Peru in the top five countries strongly or somewhat agreeing. Agreement is also high South Africa (86%), Saudi Arabia (86%, Malaysia (86%) and India (85%). By contrast, at least two out of five adults in the Netherlands, Germany, South Korea, Japan, Sweden, the US, UK and Canada long for their life to just return to how it was before the pandemic. 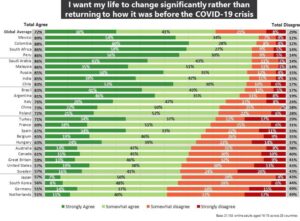 Methodology These are the results of a 28-country survey conducted by Ipsos on its Global Advisor online platform. Ipsos interviewed a total of 21,104 adults aged 18-74 in United States, Canada, Malaysia, South Africa, and Turkey, and 16-74 in 23 other countries between August 21 and September 4, 2020. Where results do not sum to 100 or the ‘difference’ appears to be +/-1 more/less than the actual, this may be due to rounding, multiple responses or the exclusion of don’t knows or not stated responses.

www.ipsos.com
Ipsos is the world’s third largest market research company, present in 90 markets and employing more than 18,000 people. Founded in France in 1975, Ipsos has been listed on the Euronext Paris since 1 July 1999. The company is part of the SBF 120 and the Mid-60 index and is eligible for the Deferred Settlement Service (SRD).

‘Changing the Course of Society By Educating Women’