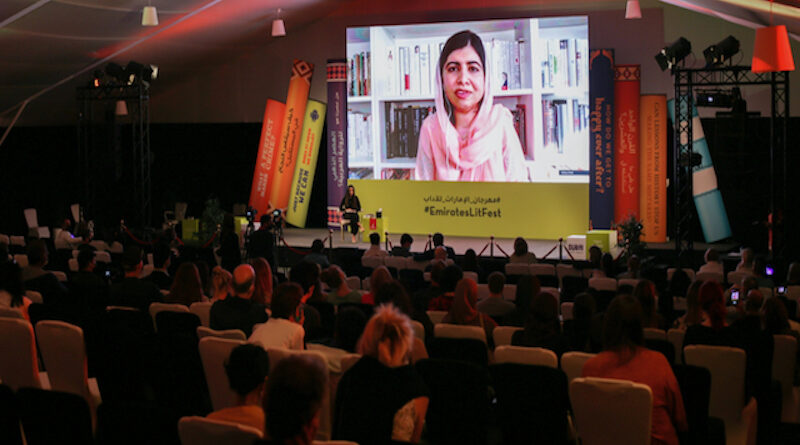 June 2nd, 2021 (Dubai, UAE): The Emirates Literature Foundation has today released the full recording of Emirates Airline Festival of Literature 2021 session with Malala. The session is available on the Foundation’s YouTube channel for free with Arabic subtitles.

The world’s youngest Nobel laureate, Pakistani activist Malala Yousafzai never stopped advocating for girls’ right to education, despite the attempt on her life by the Taliban in 2012 in her home, Pakistan’s Swat Valley. In this conversation between Emirati moderator Alia Al Mansoori and Malala, now a fresh graduate from Oxford in politics, philosophy, and economics, they delve into Malala’s life and her never-ending fight for the eradication of systematic exclusion of children and girls from education. Malala is an example that all it takes is courage to muster a voice — a revolutionary voice.

The recording is the third in the digital series of recorded sessions to be released on the Emirates Literature FoundationYouTube channel. Subscribers will get notified when new videos are uploaded.

The Festival was held with the support of Founding Partners Emirates Airline and the Dubai Culture & Arts Authority (Dubai Culture), the Emirate’s dedicated authority for heritage, arts, and culture.

More information can be found online and year-round news of #EmiratesLitFest on LinkedIn, Facebook, Twitter, Instagram and YouTube. The Foundation also has two podcasts; the Best of the Emirates LitFest, and the Boundless Book Club.

About the Emirates Literature Foundation:

The Emirates Literature Foundation is a not-for-profit organisation which supports and nurtures a love of literature in the United Arab Emirates and the region, through a programme of varied cultural initiatives.

Established in 2013 by Royal Decree issued by His Highness Sheikh Mohammed Bin Rashid Al Maktoum, Vice-President and Prime Minister of the UAE and Ruler of Dubai, the Foundation aims to foster a love for literature, with a focus on the Arabic language.

In line with the National Reading Policy of the UAE, the Foundation has implemented several long-term projects including the School Librarian of the Year Award, Kateb Maktub, and From the Inside Out, as well as conducting year-round student education programmes, book clubs and creative writing courses. The Foundation’s previous initiatives included the 2020 International Literary Festivals Conference, 2016 Dubai Translation Conference and the 2017 Dubai International Publishing Conference.

The Foundation is also the governing body of the Emirates Airline Festival of Literature, the UAE’s premier literary festival.

About the Emirates Airline Festival of Literature:

The Emirates Airline Festival of Literature is the Arab World’s largest celebration of the written and spoken word, featuring international and regional writers, poets, thinkers and speakers from around the world. Over the last 13 years more than 1,700 authors from over one hundred countries have spoken at the Festival. In 2021 the Festival reached more than 117,000 people, in person and via live streaming. Sessions included Nobel prize winner Malala, Booker Prize nominees Avni Doshi (Burnt Sugar) and Oyinkan Braithwaite (My Sister the Serial Killer), as well as internationally acclaimed authors Elif Shafak, Amin Maalouf and Lemn Sissay. Behavioural expert Thomas Erikson shared a stage with Sherif Arafa, and the Education Programme featured children’s favourites Ali Sparkes, Obada Takla, Sam Copeland, Isabel Thomas, Sanaa Chabbani, and Ben Baily Smith, AKA Doc Brown.

The aim of the Festival is to develop a culture of reading as an enjoyable habit in the UAE, and its efforts have been recognised through many awards over the years. By providing an equal platform for international and locally based talents, the Festival continues to build the literary landscape in the UAE and further afield. Alongside the main programme, the Festival organises an Education programme, reaching students across the seven emirates of the UAE. There are also student competitions, held in Arabic and English, which allow young people to showcase their skills through poetry, short stories and reading.