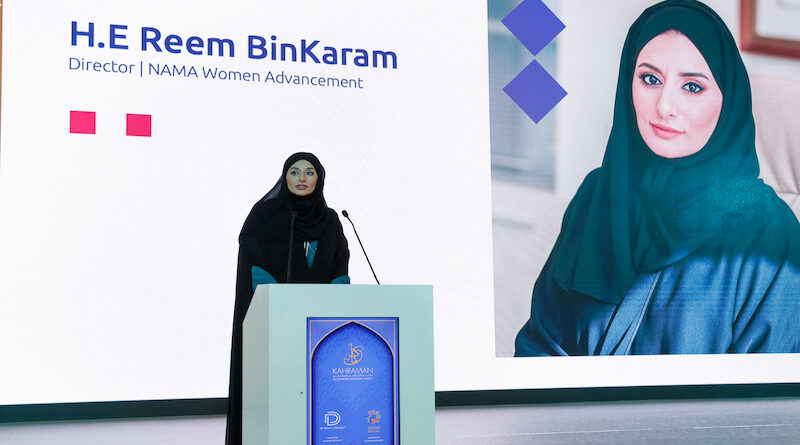 April 19th, 2022, (Sharjah,UAE): Taking a step forward in its efforts to popularise gender-inclusive practices, particularly in the private sector, NAMA Women Advancement Establishment (NAMA), hosted ‘Connecting with Irtiqa’ event. The event heightened participants’ awareness on ways in which this platform, launched in 2019, can serve as a mentor and an enabler for organisations across sectors to transform their goals of gender mainstreaming and equality into a reality.

In her opening remark HE Reem BinKaram said: “Her Highness Sheikha Jawaher bint Mohammed Al Qasimi, wife of the Ruler of Sharjah and Chairperson of NAMA Women Advancement, believes that placing women’s needs, rights and empowerment at the heart of any development or economic agenda is key to reducing inequality and advancing inclusion, growth, human welfare, and social cohesion. And as an organisation dedicated to making women’s empowerment a reality, NAMA believes that the biggest source of untapped strength and potential for growth in organisations worldwide may lie in its underrepresented female workforce”.

“This Irtiqa roundtable builds on our dedicated efforts under the Irtiqa platform to champion gender inclusivity and diversity. It is also an integral step to fulfilling the vision of NAMA Women Advancement Establishment toward a more equitable world for women,” she continued, adding that “The discussions held here today will act as a catalyst for implementing gender-responsive practices and revealing a more evidence-based approach to inclusion.”

Following the Director’s opening remarks, a short online quiz was held on gender equality and inclusion to assess participants’ opinions on the topic. It was followed by a video presentation of Irtiqa’s platform purpose and tools which kept the audience engrossed. The ‘Connecting with Irtiqa’ activity was next on the agenda, where guests networked.

Through their dynamic discussions, the attendees gained clear insights into Sharjah government’s commitment to advance women’s inclusion in the private sector, particularly through the Irtiqa platform. Moreover, another key outcome of the event was that it brought together people and organisations from diversified backgrounds in one platform for a vibrant evening of interactions, serving as a catalyst for future engagement. Ultimately, the event has encouraged renewed interest among stakeholders to boost dialogue and collaboration to achieve the collective goal of improved equality for women in the workplace by adopting Irtiqa pillars that are in line with sustainable development goal 5.

NAMA launched Irtiqa platform in 2019 to bring businesses together to apply gender mainstreaming practices, in addition to applying gender equitable practices and foster understanding of the business and social value of women’s economic inclusion. Irtiqa aims to do so by: (i) providing technical assistance to aid the roll-out of new and improved inclusive business practices, (ii) sharing knowledge on the benefits of advancing gender equality in the workplace, and (iii) bringing people and organizations together to advance women’s inclusion in the private sector.