Initiative in Cairo aims at halting rising problem on the streets

Efforts of Volunteers who Protect Women from Attacks in Egypt Highlighted at Close of IFFMENA Conference. 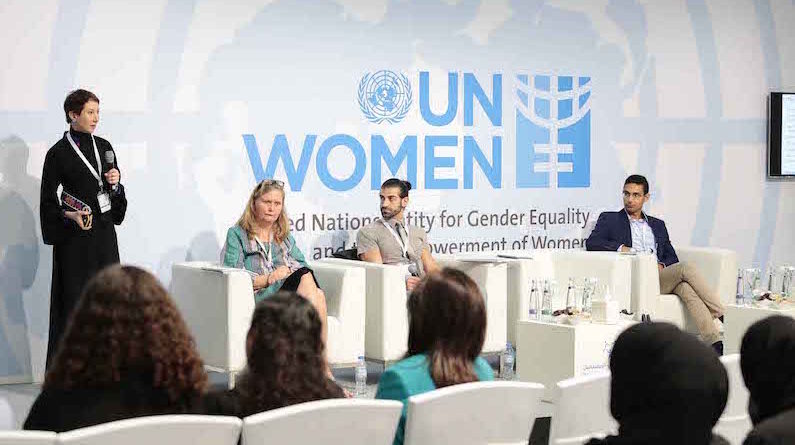 Sharjah, UAE, October 20th, 2016: The efforts of an organisation in Cairo that works to prevent sexual assaults on women was highlighted at the close of the second ‘Investing in the Future’ (IIFMENA) conference, which concluded today (Thursday) at the Al Jawaher Reception and Convention Centre in Sharjah.

The commitment of the dedicated group of workers was detailed by Abanoub Awni, a Software Engineer, who explained its ‘I Saw Harassment’ initiative during a roundtable session. Titled ‘Engaging Men and Boys as Agents of Change,’ the discussion also featured Anthony Keedi, ‘Abaad’ Psychologist; Lena Karlsson, UN Women Program Manager and Dr. Shereen El Feki, Journalist and Author.

“Our group started the ‘I Saw Harassment’ initiative because of a concern over the increasing levels of interference by boys and men on young women in Cairo. Sex crimes in Egypt have risen by 65 per cent over the past four years, so we decided to take direct action to do something positive to address this,” said Awni.

“The majority of our volunteers – 60 per cent – are men, as men have an understanding of how other men think and know which methods to use to create awareness within them. However, we also need female volunteers to speak to women, as they are not comfortable with male volunteers approaching them. We have three groups of volunteers covering three different areas in the city, with each group walking about five kilometres a day to spread awareness. Our aim is to teach men that interfering with women is not acceptable by building an awareness of the impact it has on them,” he added.

Also in the programme of four roundtables which ran concurrently was ‘The Role of Youth in Resilience,’ which was moderated by Emad Karim from UN Women, the co-organiser of the conference. The discussion featured Gulalai Ismail, Aware Girls Chairperson; Mariam Farag, MBC Head of CSR; Kawtar Zerouali, UNDP Regional Program Manager; Tom Krift, Save The Children Regional Director for Middle East and Eastern Europe and Shainoor Khoja, Mercy Corps Regional Advisor. The session shared examples and experiences from young women and men’s engagement in promoting gender equality, peace and security in the region.

The fourth of the roundtables was ‘Launch of the Essential Services Package for Women and Girls Subject to Violence’ which saw Mohammed Naciri, UN Women Regional Director and Mohamed Abdel Ahad, UNFPA Regional Director, reveal the package of tailored services for the region that come under the umbrella of a dedicated United Nations’ programme to eliminate gender-based violence.

Investing in the Future was organised by The Big Heart Foundation, a Sharjah-based international humanitarian body dedicated to aiding vulnerable people worldwide, in collaboration with the United Nations Entity for Gender Equality and the Empowerment of Women (UN Women). The forum was held under the patronage of His Highness Sheikh Dr. Sultan Bin Muhammad Al Qasimi, Member of the Supreme Council and Ruler of Sharjah and his wife, Her Highness Sheikha Jawaher Bint Mohammed Al Qasimi, Chairperson of The Big Heart Foundation and Chairperson of the NAMA Women Advancement Establishment.