Panel discussion explores issue at the ‘Investing in the Future’ conference. 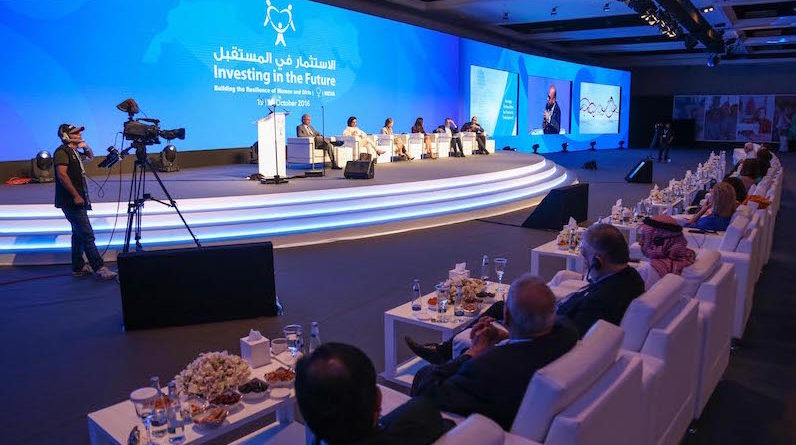 Sharjah, UAE, October 20th, 2016: The importance of female assertiveness in women’s empowerment was a key theme arising from a panel discussion that took place at the ‘Investing in the Future’ (IIFMENA) conference, which concluded today (Thursday) at the Al Jawaher Reception and Convention Centre in Sharjah.

Titled ‘Strategic Partnerships for Economic Development,’ the discussion explored the initiatives and actions needed to develop women’s capabilities, with the panelists highlighting issues that included training women to have a strong voice in the workplace as well as in other areas of their lives. The session, which took place on the final day of the two-day forum, was moderated by Mohammed Naciri, UN Women Regional Director.

Discussing how assertiveness helps women with their career prospects, Roshaneh Zafar, Kashf Founder and Managing Director, Kashf Foundation, highlighted a study from Stanford University that found that women were one-and-a-half times more likely to receive a promotion if they were regarded as having assertive traits. She outlined how her organisation in Pakistan was encouraging women who had recently married to stand up to their relations, as it was often their in-laws that were behind the decision for her not to remain at work.

“We found that more often than not it is the in-laws who persuade recently married women to stop working, so we started an initiative titled ‘Not without my mother-in-law,’ which aims to reassure a working woman’s in-laws that their new daughter will be safe from any harm if they stay at work. We invite them all in for a friendly chat and help them to realise that now that the young woman is a part of their family there should be no reason for her to stop working if she doesn’t want to,” she said.

Also commenting from a Pakistan perspective on the importance of generating female assertiveness was Kaiser Naseem, Regional Head of Bank Advisory Services, IFC. He explained how increasing women’s capacity in this regard was not only a CSR initiative, but one that also has a strong financial incentive.

“We encourage women to be assertive through our entrepreneurship schemes and we also work with commercial banks to provide services to women. Less than five per cent of women in Pakistan have access to banking services but when they do, they prove to be much more loyal customers than men. We run a ‘gender sensitivity’ programme that helps banks sell their services to women. One bank, HBL had an increase of deposits in women’s accounts from 10 million to 50 million rupees in the space of one year after starting the programme,” he said.

Citing how women can take a lead in the revolution that sees more and more people working away from the office environment, Fadi Ghadour, Chairman and CEO, Wanada Capital, said: “Twenty-five per cent of the working population today does not go to the office to work. We need to be able to bring work to women and take advantage of their skills to close the knowledge gap. We live in a digital world where we are all connected – physical attendance at an office is no longer a requirement to be an effective worker. We need to think innovatively and use technology,” he said.

Finally, effective child care and baby-friendly workplaces were brought up as being important considerations for women’s empowerment. Speaking about her own experiences as a new mother, Noura Salim, Social Development Executive Director, said that she was now more acutely aware of the need for facilities that accommodate recent mums.

“I am breastfeeding and am fortunate to be in senior management with my own office. This is important as I can express in privacy when I am at work. However, many new mothers are not in the same position as me and it has made me realise that there is a real need for such areas for mothers in every workplace,” she said.

Her sentiments were echoed by Beatrice Cernuta, Director of Strategy and Operations, at Tarbi. “Where legislation is not in place to support women workers experiencing maternity then the workplace needs to step in. This is what is happening in the United States. It is one of the few countries in the world that doesn’t offer paid maternity and paternity leave, but we see that employers are filling this gap. This is what is needed to encourage women to continue pursuing their careers,” she said.

Organised by The Big Heart Foundation, a Sharjah-based international humanitarian body dedicated to aiding vulnerable people worldwide, Investing in the Future was conducted in collaboration with the United Nations Entity for Gender Equality and the Empowerment of Women (UN Women). The two-day forum was held under the patronage of His Highness Sheikh Dr. Sultan Bin Muhammad Al Qasimi, Member of the Supreme Council and Ruler of Sharjah and his wife, Her Highness Sheikha Jawaher Bint Mohammed Al Qasimi, Chairperson of The Big Heart Foundation and Chairperson of the NAMA Women Advancement Establishment.

Initiative in Cairo aims at halting rising problem on the streets