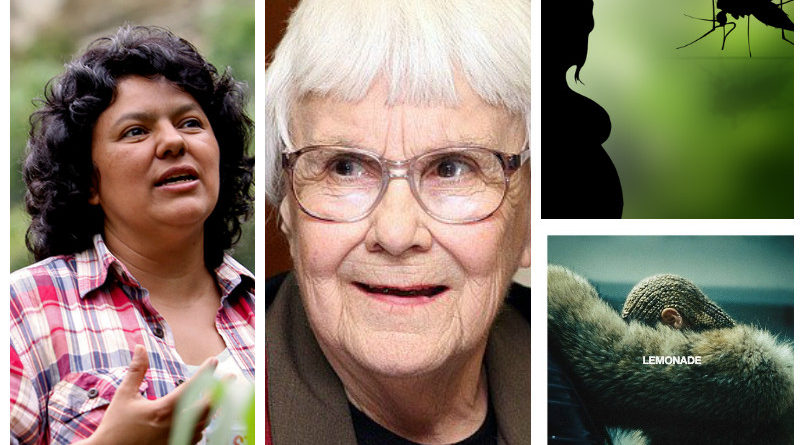 It has been a tumultuous year to say but the least. 2016 was year of the Nasty Woman that saw America unable to break the glass ceilings by voting for Donald Trump, instead of giving a woman top seat at the global table.

It was during the last presidential debate when Hillary Clinton took a jab at her opponent by saying “My Social Security payroll contribution will go up, as will Donald’s, assuming he can’t figure out how to get out of it,” Trump tried to cut her off by muttering “Such a nasty woman.” The one-liner actually became a defiant cry seeing a deluge of ‘nasty women’ online and off making a powerful statement.

It was also the year when eminent American author and Pulitzer Prize winner Harper Lee who had released her long awaited second book ‘Go Set a Watchman’ in 2015 – a sequel to her classic To Kill a Mockingbird; passed away on February 10th, 2016.

Men also made a huge #HeForShe contribution towards women empowerment with Canadian Prime Minister Justin Trudeau saying: “We shouldn’t be afraid of the word feminist. Men and women should use it to describe themselves any time they want.” He made the remarks during a discussion on global gender gap at the World Economic Forum in Davos, Switzerland.

While Adele’s Carpool Karaoke with James Cordon was a big hit going viral in the digital world with over 135 million views and making it the most watched late night YouTube video; the #PriyankaChopra hashtag went viral for all the wrong reasons when the global Indian star appeared on Condé Naste Traveller wearing a T-shirt with the words “refugee,” “immigrant,” and “outsider,” crossed out. Talking about the issue, she said that the image was to address xenophobia, critics accused her of undermining a huge topic of refugee migration.

Palestine made huge progress in a bid to end violence against women in June 2016 when the Ministry of Women’s Affairs announced plans to launch a National Observatory on Violence Against Women in 2017 that would collect data and document cases of gender-based violence for the very first time.

The Beyhive and the rest of the world was abuzz with Queen Bey’s new, statement-making album Lemonade. A visual masterpiece, the album celebrated black female empowerment showcasing iconic hit-makers including Formation.

Queen of the Curve as she was called, Dame Zaha Hadid – a respected architect – passed away. Her famous works included 2012 London Olympics Aquatics Center, The Heydar Aliyev Cultural Center in Baku, Azerbaijan and the Contemporary Arts Center in Cincinnati, Ohio, USA. The first woman to win the Pritzker Architecture Prize in 2005, she was appointed a Dame Commander of the Order of the British Empire for her contributions to the field of architecture in 2012.

All hell broke loose with the emergence of the Zika virus that enveloped the Americas with ferocious controversy especially during the Olympics season held in Brazil. Pregnant women were advised not to travel to affected countries.

Palestine made huge progress in a bid to end violence against women in June 2016 when the Ministry of Women’s Affairs announced plans to launch a National Observatory on Violence Against Women in 2017 that would collect data and document cases of gender-based violence for the very first time.

In Nigeria, 21 girls returned home of the more than 200 girls kidnapped by extremist group Boko Haram this October. Honduran indigenous and environmental rights campaigner Berta Cáceres was murdered in March 2016, just a week after she was threatened for opposing a hydroelectric project.

According to a Leanin.org and McKinsey report ‘Women In the Workplace 2016’: More than 75 percent of CEOs include gender equality in their top ten business priorities, but gender outcomes across the largest companies are not changing.”

During her keynote address at the Women Deliver conference in Copenhagen, Denmark, Melinda Gates announced the Bill & Melinda Gates Foundation’s $80 million commitment to close gender data gaps and accelerate progress for women and girls. “By adopting the SDGs the world agreed to achieve gender equality by 2030. But we cannot close the gender gap without first closing the data gap,” said Melinda Gates. “We simply don’t know enough about the barriers holding women and girls back, nor do we have sufficient information to track progress against the promises made to women and girls. We are committed to changing that by investing in better data, policies and accountability.”

Gender Equality is the way forward for not only economic development but also for sustainable peace and prosperity. It is not only the responsibility of world leaders, State, corporates but also individuals to make an effort to achieve equality in every sphere of society – be it care work, access to education, opportunities, bodily autonomy, policymaking, bridging the gender divide – both on the virtual and real world.

The Year In Review: A Woman’s Perspective