Ananke brings the Technovation Challenge to the UAE

Groundbreaking global tech competition to empower female students in the UAE by mentorship and encouraging their ‘techpreneurship.’ 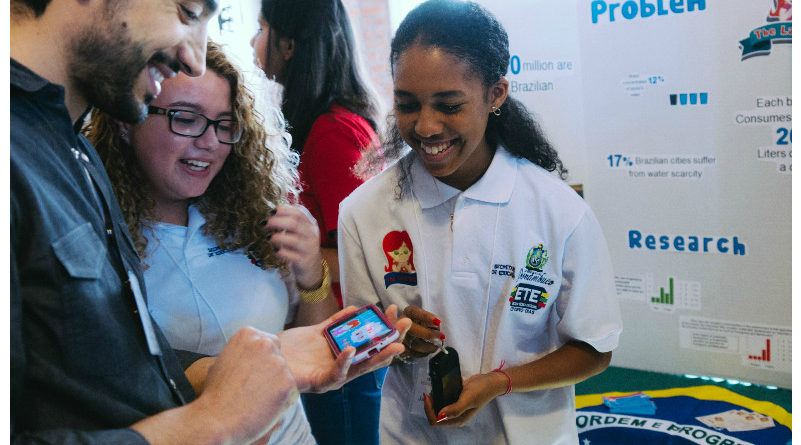 Jan 24th, 2017, Dubai (UAE): A pioneering competitive program for girls in tech, the Technovation Challenge, has finally arrived in the UAE. A unique opportunity for young girls of the region to enhance their tech and entrepreneurial skills, the program was launched Jan 18th, 2017, by one of Technovation’s regional ambassadors in the UAE and Executive Editor Ananke, digital magazine empowering women through awareness, engagement and education.

Girls aged 10 to 18 years can start by registering their teams on the main Technovation website. The work requires the team to act as a mobile tech company, conduct a research to identify a problem in their communities and subsequently create an app that resolves a problem through coding with the help of teachers, mentors and ambassadors.

Through the competition, Technovation strives to build female tech entrepreneurs and tech innovators around the globe to counter underrepresentation of women in tech. Statistics have shown that only seven percent of tech companies are founded by women, holding just seven percent of leadership positions in this sector alone, and only 18 percent of Computer Science majors are females. The Technovation Challenge invites girls to compete by first recognizing a problem in their community and encouraging them to solve the issue by building a mobile app. Girls are supported by Technovation mentors in preparing a business plan to launch that app.

The Technovation Challenge started in 2010 as a small group of 45 girls pitching their ideas in Mountain View, California, USA. The event was hosted by tech giant Google. At present, the program is effectively operating in 78 countries, engaging 10,000 girls and 2000 educators and mentors. The program has evolved into a global competition, training engineers and scientists to mentor young girls. Final pitches will take place in USA.

The recently launched program in the UAE invites schools, colleges and universities to not only register students as participants; but also encourages mentors to apply and help showcase the country’s burgeoning talent in the tech sector.

“We are happy to announce that Ananke is bringing this groundbreaking challenge to the UAE. The importance of women’s participation in Tech is enormous. Inclusion brings diversity. Women’s voices in all professional sectors and spheres of society can be heard loud and clear. This powerful voice reverberates unanimously across the globe and needs to be leveraged more for the good of humanity,” remarks Ananke’s Editor, UN Women’s Empower Women Mentor and Regional Ambassador Technovation, Sabin Muzaffar. It is important to note Sabin is one of the Regional Ambassadors of the Technovation Challenge and is leveraging Ananke – already a platform striving to empower women and girls – to reach out to the UAE community.

Adding she says: “The UAE is a country that cherishes diversity, tolerance and inclusion. With the visionary leadership upholding these ideals and encouraging the spirit of entrepreneurship, it is a privilege for Ananke to play its due part as a catalyst in bringing the country into the global tech arena showcasing sheer brilliance of UAE girls.”

All information from application to all fundamental reading material is available on the website. “The Technovation curriculum encourages a suite of transferable skills in our students that reach beyond a traditional, classroom-based computer science curriculum. The curriculum has the direct, hands-on application of creating a personally relevant mobile app instead of taking a programming test in a classroom. The interdisciplinary focus on applied computer science and business encourages girls to work as part of a team to create an original and relevant product. The Pitch events challenge the girls further by asking them to communicate their ideas, process, and final product to an audience and panel of experts,” to quote the main website.

Empowering girls all over the world, the UN Women has, in fact, partnered with Iridescent – a non-profit organization that created the Technovation Challenge, on April 23rd, 2015 to develop and promote apps built by young girls.

Announcing the partnership on Girls’ ICT day, the organization not only endorse gender equality but aim at helping create a supportive environment for women with less access to resources. US President Barack Obama also recognized Technovation at the 2016 White House Science Fair.

Girls from 10 to 18 years of age can register electronically for 2017 challenge. The last date to register is March 8th, 2017 at 5.00 PM PT. Early registration will give more time to work on the curriculum.

Ananke is a non-profit, an interactive platform celebrating visionary women across the MENA region and beyond. The digital platform is known for producing some of the most profound, in-depth stories, articles and commentaries relating to issues of female empowerment, women economic emancipation and gender mainstreaming.

Ananke’s efforts for women’s empowerment have also been featured and lauded in The Moroccan Times. The organization has launched two pioneering programs under the umbrella of Ananke Labs: Ananke’s Internship Program for girls, and Empower – a digital media program for professional women. To empower young girls and female students in new media, Ananke’s Internship Program has also forged partnerships with renowned global entities including Women’s Digital League, Women Engineers Pakistan and Circle Women. Empower has kick-started its pilot program in January 2017.

To Contact Ananke’s Sabin Muzaffar, one of Technovation’s regional ambassadors in the UAE or find out more: media@anankemag.com

Ananke is an Empower Women collaborator and a division of TreeHouse Consultancy LLC.