Ashleigh Boisseau narrates a powerful story of how millions of women, men and children came together on Women’s March, vowing to protect each other in the face of authoritarian tyranny. 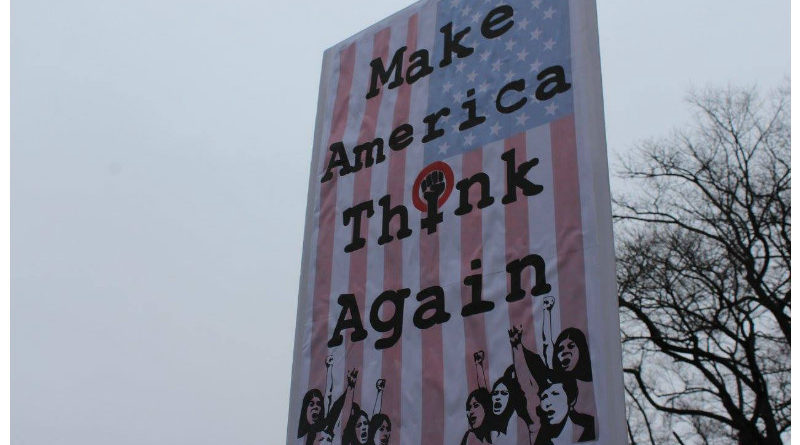 #HERstory was made January 21, 2017, as an estimated 4,465,169 people came together all over the world to make one promise to one another collectively, the promise to protect and empower one another.

Millions of women, men and children made a pact with one another to protect one another the day after Donald J. Trump became sworn into office as President of the United States.

The March on Washington was the central hub where more than half-a-million people raced from every direction, every metro, side street, in pink pussy hats and signs in hand. People came and showed out. With my mother and 15-year old sister beside me, we were a small humbling part of this HERstory moment.

President Trump has threatened any and all groups of people that are not white, wealthy men. Leading up to the election and post-election through inauguration day, Trump had built a platform that his supporters were overjoyed.

Meanwhile, Trump’s standing on the backs of every group he targeted during his campaign trail: women, blacks, Hispanics, immigrants, refugees, Muslims, people with disabilities, and LGBTQ to name just a few (literally).

January 21st signifies why this moment, we as a human race globally, collectively decided to stand in resistance to Trump and his posse’s policies, which affect each and every one of us.

There are three in particular that are resulting in protests and call-to-action all over the world. Which are: Jan 20, the repeal of Obamacare (Affordable Care Act) which ensures health insurance for everyone. Jan. 25, the start of the construction of a 1954-mile long wall along the US-Mexico border (expecting Mexico to pay) Jan. 25, the employment of 10,000 immigration officers to begin the process of deporting illegal immigrants, targeting “sanctuary cities” which offer protection of undocumented immigrants. Jan. 27, the banning the entry of people from seven Muslim countries: Iran, Iraq, Syria, Sudan, Libya, Yemen, and Somalia for 90 days and suspending refugee program for 120 days. Syrian refugees are barred completely.

When the ban was made public, the U.S. reacted and resisted all over the country in airports in Los Angeles, San Francisco, Washington, Dallas, New York’s JFK, Raleigh, Houston, Seattle, Portland and Atlanta to protest and to wait as family and friends hopefully were able to come home. ACLU lawyers sat in the middle of airports willing to take any case on pro-bono.

According to NPR’s interview, the German chancellor, Angela Merkel said she rejects the notion that fighting terrorism justifies discrimination of a particular background or faith.

The United Nations responded, “The needs of refugees and migrants worldwide have never been greater and the U.S. resettlement program is one of the most important in the world.”

Canadian Prime Minister Justin Trudeau said Canada “will welcome those fleeing “persecution, terror and war regardless of your faith.”

France compared Trump as an isolationist.

Iran called it “a flagrant insult to the Muslim world, especially the great Iranian nation.”

In response to the ban executive order, U.S. Attorney General, Sally Yates took a long, hard stand against President Trump when she released a letter which stated the Department of Justice would not defend his ban and that night, Yates was fired.

Seattle, Washington Judge James Robart came in and put the ban on hold as he found it to be unconstitutional. “The court concludes that the circumstances brought before it today are such that it must intervene to fulfill its constitutional role in our tripart government,” Judge Robart wrote.

Muslim-American feminist activist and Co-Chair of the 2017’s Women’s March, Linda Sarsour spearheaded alongside 27 other plaintiffs a lawsuit against Trump, Homeland Security Secretary John Kelly, the U.S. Department of State and the Director of National Intelligence in the United States District Court for the Eastern District of Virginia. The lawsuit is in regards to lawfully living in the United States and wanting to prevent the ban of traveling to and from the country because of their immigrant status.

In addition to the outrage of the ban and the wall, protests, and resisting has also been with his Cabinet appointees.

The following are confirmed (frightening):

Feb. 7 – Betsy DeVos – Department of Education (no government experience and has never been in public school system, pushes for private and charter schools) – VP Mike Pence broke the tie to confirm DeVos.

While in voting, Massachusetts Senator, Elizabeth Warren who has been extremely vocal into Trump’s politics was silenced on the Senate floor during the debate on attorney general nominee Jeff Sessions.

In 1986, Coretta Scott King wrote a letter against Jeff Sessions’ nomination to become a federal judge due to his track record on civil rights and said have him appointed would demean the legacy of Mrs. King’s husband, the Rev. Dr. Martin Luther King Jr.

Warren was prompted to stop by Majority Leader Mitch McConnell as she was reading a portion of the letter from Coretta Scott King.

In response, Warren read the letter outside the doors of the Senate and streamed it live on Facebook. Senator Bernie Saunders among others spoke up and out at this moment.

We as a human race are in the beginning stages of resisting in solidarity with one another.

The momentum this movement has is protective over each and every human being. Rallies, protests, conferences, letters, meetings and phone calls are among the ways thousands of individuals are supporting black lives matters, women’s reproductive rights, no ban no wall, equal pay and representation, LGBTQ rights and safety, education and religious values, and much more.

The momentum since January 21st has not ceased and we have to keep it alive and strong. Hundreds of thousands are calling and writing their representatives, protesting, volunteering, speaking out. We have to continue. We have to understand the enemy wants us to feel defeated, to focus on what makes us different, but we have to understand we carry each other’s struggles and hardships. One group’s win is all of ours. ONE LOVE.

To participate in the resistance and to be a part of this HERstorical movement that will be forever a part of HERSTORY visit the links below… Also, stay tuned as the 2017 Women’s March co-chairs are organizing a General Strike: a day without a woman.

My single mother journey: From lonely to liberating