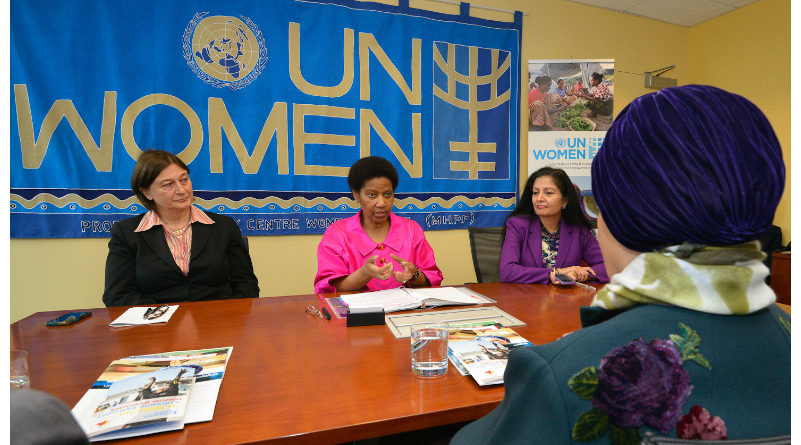 Her Highness Sheikha Jawaher bint Mohammed Al Qasimi during her visit to UN Women in New York.
by ANANKE March 8, 2017

Sharjah (UAE), March 8th, 2017: In celebration of the International Women’s Day, Her Highness Sheikha Jawaher bint Mohammed Al Qasimi, Wife of His Highness the Ruler of Sharjah and Chairperson of the NAMA Women Advancement Establishment, said: “The UAE has always been a leader in launching initiatives aimed at supporting and empowering women”.

“Emirati women have been one of the cornerstones of the nation’s development since its founding in 1971 and we have worked alongside men in taking the UAE to its position as a major player on a global stage. Ever since the reign of the late Sheikh Zayed bin Sultan Al Nahyan, our wise leadership has made every effort to provide women with the tools and the means to contribute to society in terms of both community and commerce,” she added.

Sheikha Jawaher continued: “When we talk about women’s empowerment, we must not forget the efforts of Her Highness Sheikha Fatima Bint Mubarak, Chairwoman of the General Women’s Union, Supreme Chairwoman of the Family Development Foundation and President of the Supreme Council for Motherhood and Childhood, for her immeasurable efforts in supporting women. Sheikha Fatima’s ongoing efforts have been an incentive for Emirati women to become a global role model for their unique abilities and achievements as well as their social, economic and professional status.”

Her Highness Sheikha Jawaher continued: “The UAE has already achieved many milestones in women’s empowerment and has gained regional and international recognition. That has become apparent through its ranking among top countries in a number of indicators regarding women’s support and empowerment; the UAE ranks first in the Arab world on women’s rights and number one in empowering women in leading and high-profile positions in the government and parliament. It also ranks number one in the world for treating women with respect and dignity. The UAE is also among top countries in women’s enrolment in higher education institutions.”

Sheikha Jawaher said: “The UAE has provided a regional role model for acknowledging women in modern society and recognising their contribution across all forms of such an energetic and ever-evolving society. The UAE has managed to empower women without patronizing them or acting with condescension, a reflection of the respect and genuine belief in their prominence within the union.”

As the world celebrates International Women’s Day, Her Highness Sheikha Jawaher Al Qasimi has reiterated her call for the establishment of a UAE Federal Ministry for Women.

Highlighting the efforts of His Highness Sheikh Dr. Sultan bin Muhammad Al Qasimi, Member of the Supreme Council and Ruler of Sharjah, Her Highness Sheikha Jawaher said: “We cannot talk about Sharjah’s leadership in empowering women and supporting their presence on all levels, without referring to the decree issued in 2015 on the establishment of NAMA Women Advancement Establishment.

NAMA aims to offer international programmes on the basis of integration in work and development between men and women and provide opportunities for women in the economic, professional and social sectors, and emphasize women’s instrumental and indispensable role as important human capital in the development process, leading to a comprehensive and sustainable global renaissance that meets the aspirations of women around the world.