Ananke showcases CEO, NOVO CINEMAS in its series #HERstoryUAE as she receives award in celebration of International Women’s Day. 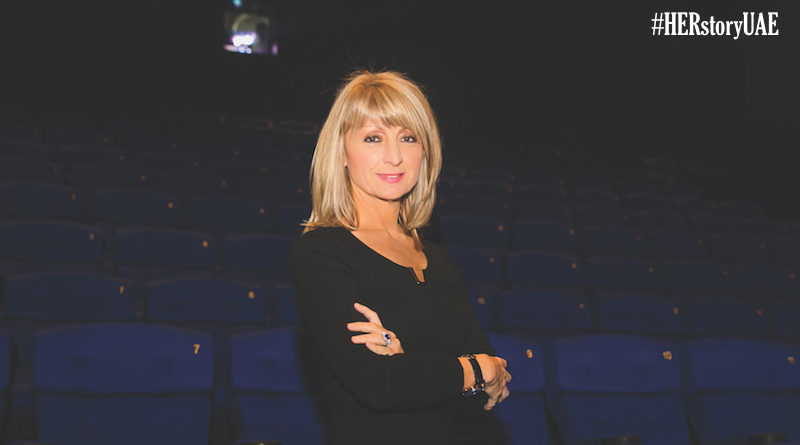 Debbie Stanford-Kristiansen, CEO of Novo Cinemas, has been awarded as the second most influential woman in the Top 50 Women in Global Cinema – according to international cinema business website, Celloid Junkie.

The ranking was announced yesterday in celebration of International Women’s Day, and highlighted Stanford-Kristiansen’s contributions towards pushing cinema excellence and innovation across cinemas in the UAE (Dubai, Abu Dhabi, etc.), Qatar and Bahrain. This includes the 7-Star cinema experience, the Qatar-sponsored VIP screens, the largest IMAX Laser in the Middle East North Africa region and the first 4D cinema, amongst other achievements.

According to Celloid Junkie, the Gulf States are one of the most active and dynamic cinema markets in the world today, exemplified by the energetic CEO of market leader Novo Cinemas.

Commenting on the accolade based on nominations from the industry itself, Stanford-Kristiansen said: “Although the cinema industry as a whole is male-dominated, I am very fortunate and appreciative that our owners, ELAN Group, have been so supportive of me as a female executive in the region. The overall success of the brand is based on the foundation of supportive management and a great team of passionate dedicated professionals. I am very grateful for receiving this recognition for Novo Cinemas and look forward to further showcasing what Novo Cinemas – the leading state-of-the-art entertainment hub in the region – has to offer as we continue building our brand across the region.”

Since taking on the role in 2013, Debbie has turned Novo Cinemas to the household entertainment brand it is today, offering more than a destination to watch movies, but an immersive state-of-the-art destination for a variety of entertainment opportunities through strategic partnerships and organic growth. The cinema group operates across the region in the UAE, Qatar and Bahrain, with further expansion plans to continue across the region in the coming years.

“Although the cinema industry as a whole is male-dominated, I am very fortunate and appreciative that our owners, ELAN Group, have been so supportive of me as a female executive in the region.”

As an accomplished leader and more than 25 years of experience in the entertainment, events and hospitality space, Debbie is a leadership executive with extensive experience across public, government and private organisations and has a proven track record of driving growth and successful business development. As part of its expansion plans, Novo Cinemas will increase its contracted screen count by 55% from 129 in 2015 to over 200 in 2016. In 2009, in her previous role as CEO, she also spearheaded 20% growth in events at events@Bahrain, a company owned by Bahrain Mumtalakat Holdings Company, despite the challenging economic landscape.

Respected by her peers and her partners, Debbie has worked with her Executive team to diversify Novo Cinemas from a cinematic experience to an innovative entertainment proposition through strategic partnerships, significant venue and technological investments, and alternative content opportunities for consumers. Under her leadership and guidance, global leading brands have been brought on as partners such as IMAX, BEIN Sports and most recently Coca-Cola. In 2015, Emirates were also the leading partner for the Liam Neeson Taken 3 Red Carpet Premiere, the first dedicated red carpet premiere outside of a Film Festival to be held in Dubai.

Debbie’s values and aspirations have seen NOVO cinema transform itself since its rebrand from Grand Cinemas in 2014. It now offers unparalleled standards in terms of both the interior design, technology, seating comfort, the luxurious 7* experience, diverse F & B offering and of course, the highest level of customer service.

Kristiansen brings vast experience gained at such companies as Regent Exhibitions – IMEX Frankfurt, where she served as VP for Global Sales from 2001 until 2005, as well as more recently her role as CEO at Bahrain Exhibition & Convention Authority (from 2009-2012) a promotion from her original position as Deputy Chief Executive (2009).