Plea was made during the organisation’s visit to Jordan IRC’s Syrian Refugee Women’s Empowerment Programme in Amman. 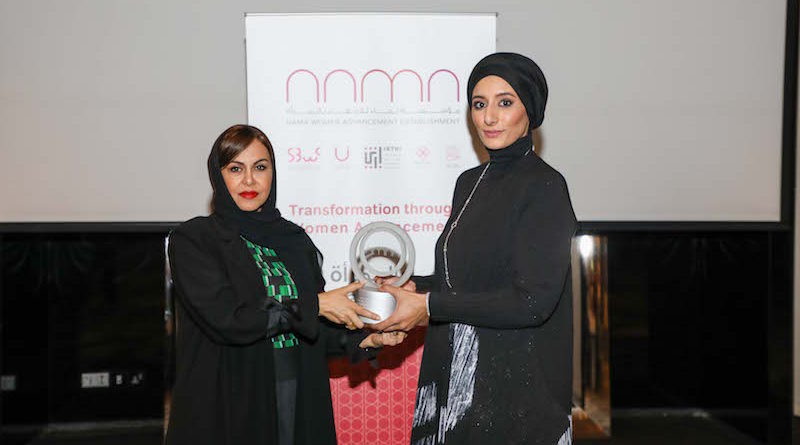 Reem BinKaram honouring SCCI, receiving the honouring is Board Member Raghda Taryam.
by ANANKE May 24, 2017

Amman, Jordan, May 24th, 2017: NAMA Women Advancement Establishment (NAMA) has called for the intensification of international efforts to support refugee women professionally, economically and socially. The women empowerment organisation, which works to move the status of women beyond equality to ensuring they become fully productive members of society, made the plea during a visit by a NAMA delegation to the Syrian Refugees Empowerment Programme, a subsidiary of Jordan’s International Rescue Committee (Jordan IRC) in Amman.

In alignment with the vision of Her Highness Sheikha Jawaher bint Mohammed Al Qasimi, wife of His Highness the Ruler of Sharjah, Chairperson of NAMA and the United Nations High Commissioner for Refugees (UNHCR)’s Eminent Advocate for Refugee Children, NAMA used its visit to advocate essential training, social care and job opportunities for women displaced from their homes to allow them to meet the needs of their families immediately as well as in the future when they return to their homeland.

During the visit, the NAMA delegation discussed with representatives of Jordan IRC ways to enhance mutual cooperation for supporting refugee women in the Middle East and North Africa (MENA) region. The delegation had the opportunity to gain first-hand experience of the small enterprises managed by women under the Syrian Refugee Women’s Empowerment Programme in Irbid, Ramtha and Al Mafraq, the cities in Jordan that host the largest number of Syrian refugees.

Reem BinKaram highlighted the efforts undertaken by Her Highness Sheikha Jawaher Al Qasimi to support and empower women and girls, in particular those with refugee status. She underlined Her Highness’s vision to expand the scope of initiatives and programmes so that they could further develop their professional skills and capabilities.

“Women are the most affected group of refugees due to their great family responsibilities. In line with the directives of Her Highness Sheikha Jawaher bint Mohammed Al Qasimi, we seek to mobilise international efforts to provide all means of support and economic empowerment, especially in poor and middle-income regions affected by instability caused by conflict and natural disasters,” said Reem BinKaram.

“Through our visit to Jordan IRC’s Syrian Women’s Empowerment Programme we aim to devise further strategies that align with NAMA’s vision and its efforts to improving the conditions of refugee women. We will follow the progress of these programmes that are aimed at empowering women economically, professionally and socially,” she added. 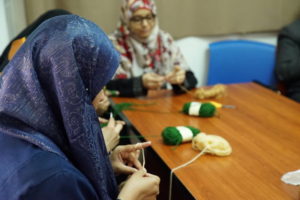 On the sidelines of its visit, the delegation handed £100,000 (AED440, 000) to IRC Jordan – the amount that was paid by SCCI for the personal overcoat of Her Highness Sheikha Jawaher Al Qasimi following her donation of the coat to the Jeans for Refugees initiative. The garment was sold at a charity auction at the Saatchi Gallery in London in October 2016.

Renowned fashion designer Johnny Dar, founder of Jeans for Refugees, said: ‘It is an honour to support the work of the International Rescue Committee who are helping refugees around the world, and bringing safety, power and stability back to people who have suffered the consequences of manmade and natural disasters like war and famine.  I hope the visit to Jordan inspires further collaboration and creativity in support of the refugee cause, and that great ideas and actions are birthed from it.  It is inspiring to see Jeans for Refugees becoming a sustainable movement in support of the refugee cause, and I hope many other artistic projects like it, however big or small, will become part of a unified movement for positive change, since I believe this is not only possible but necessary in response to the refugee crisis, and also for humanity as a whole’

Raghda Taryam said: “In line with its commitment to social responsibility towards humanitarian issues, Sharjah Chamber of Commerce and Industry purchased the personal overcoat of Sheikha Jawaher Al Qasimi last year. SCCI was delighted to be able to participate in the Jeans for Refugees initiative and to contribute towards providing aid and assistance to displaced persons to help ease their suffering.”

“Philanthropy and giving are deeply rooted in UAE society, thanks to the vision of our wise leadership. We are committed to following the altruistic approach laid by our leaders out of our belief that helping refugees and those in need is not just a noble deed, but a human duty. SCCI will always be part of such leading charity initiatives,” Taryam noted.

On the side-lines of its visit to Jordan, NAMA hosted a gala dinner to honour SCCI for its generous donation of 100,000 pounds sterling (AED440, 000). The reception brought together delegations representing the Jeans for Refugee initiative, The Big Heart Foundation and Jordan IRC, as well as representatives from the Syrian Women’s Empowerment Programme.

The dinner was attended by Mark Schnellbaecher, Regional Director of Jordan IRC; Thomas Garofalo, Regional Director for Public Affairs at IRC; Anna Rita Ronzoni, gender equality expert; and Daniel Cohn, Officer Institutional Philanthropy and Partnerships at IRC and Manager of Dossiers group of partners in the Middle East and Europe.

As one of the leading international organisations involved in supporting refugees worldwide, IRC generates revenue from direct donations and contributions made by individuals and charitable societies. Jeans for Refugees is one of the leading supporters of IRC and collects personal item of clothing donated by celebrities and famous people to be auctioned, with the proceeds from the sale going to the organisation.

Jeans for Refugees was launched by Johnny Dar, an internationally-acclaimed fashion designer and artist. The essence of the initiative was to empower people to collaborate for a common goal and to create a brighter world through the involvement of popular celebrities from the worlds of cinema, art, fashion and music to support refugees worldwide.

The Syrian Refugee Women’s Empowerment Programme is a subsidiary of IRC Jordan and is considered an innovative model for promoting and developing the capacity of refugees, particularly women. It streamlines gender equality frameworks and activates the principle of social and economic participation of women, thereby allowing them to adapt to their current situation socially and economically. The programme aims to provide women and girls with the skills and resources needed to earn income, as well as offers psychological and emotional support. It also works to prevent violence and abuse, build networks and support the ability of women and girls to use and manage resources.

The Need for Gender Equality Programming in Times of Crisis