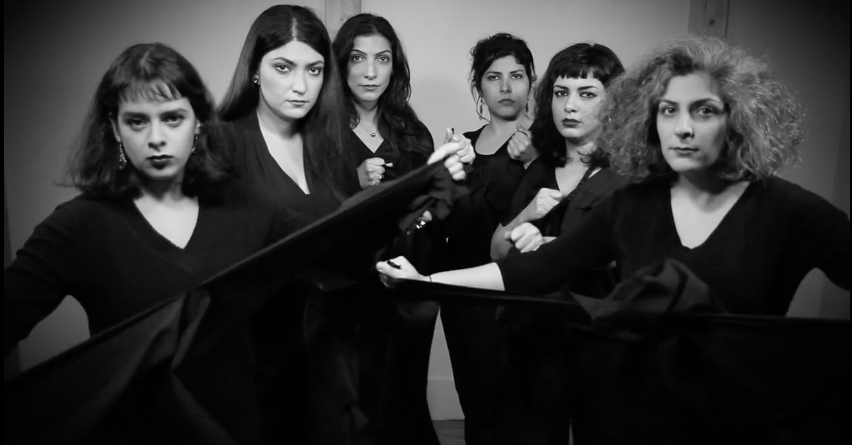 LOS ANGELES, CA, USA: The Farhang Foundation Short Film Festival returns Sept. 30, with the film Strappa chosen as one of their six finalists in this highly competitive festival.

The duo behind Strappa, meaning ‘to rip or tear’ in Italian are artist and filmmakers, Sepideh Salehi and Kamran Taherimoghaddam. In this black-and-white meditation on the sexes, men play the traditional tombak drum, tapping out a percussive patter, while women tear sheets of black fabric in sharp response. The result is an aural dialogue on a universal issue. 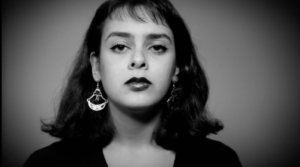 “The concept of this film brings up the tearing of fabric to signify women empowering themselves from the legal obligation of being forced to cover themselves up, i.e. hijab,” explains Taherimoghaddam. “Socially in the U.S. and other countries, there are other obligations and rules that women face. One example of this would be the societal issues with breastfeeding in public. We feel that this film speaks to a general audience and reminds them that women are working to free themselves from their restraints in all cultures.”

For Salehi and Taherimoghaddam, although Iranian culture plays a strong role in their art, as a husband-and-wife art team they feel that gender equality is universal. “In all societies the dialogue on gender is at the forefront, including and especially in the United States of America,” says Salehi.

Reflecting their close working relationship, the couple sees feminism as a dialogue between men and women. “It’s not just the men who get the first word in,” says Salehi, “but it’s also not the woman who has the last. So in other words, feminism is not just about empowering women’s rights, it’s about the equality and equal say of both genders.” 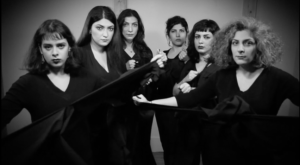 Both artists are originally painters. While living in Italy in the early 2000s, they began experimenting with film and video. “We found that it was a medium that had the whole package,” says Taherimoghaddam. “We have sound, we have movement. While we continue to work with our mediums, for this particular project we felt that video was the best medium to show subtle dialogue. But we also kept the same ideals from our painting subjects. There is an intensity in the faces and actions of our subjects. One usually sees and feels this type of intensity in still and painted images.”

Strappa will be screened on September 30th, 2017, along with the following films below, with the top three winners announced and awarded. The screenings will be followed by an awards ceremony hosted by Iranian American comedian and actress Melissa Shoshahi (FOX, Laugh Factory, Nickelodeon). This red-carpet event is followed by an exclusive cocktail reception in honor of the filmmakers.

As a couple in Tehran, in the midst of moving out of their apartment, prepare to go to a party they clash over the issue of bringing an appropriate gift. The husband is a filmmaker and the wife is a painter. As they mull over choices, the film is intercut with images of Iranian issues and icons-from the poet Ferdowsi to acid attacks on women. How do you depict Iranian culture through a single symbol?

Filmed in northern Iran, this music video for the groundbreaking band Bomrani, beautifully visualizes the isolation and connection of human existence.

A beautifully crafted film about a little girl who lives in an orange tree journeys in search of a city of rainbows to save her sad town in this gorgeous animated short.

Prolific short filmmaker Sam Javadi, who was born in Iran and is now based in California, filmed a modern dancer performing in an abandoned, concrete bunker-like building to create this evocative study of identity—how do we move on and let go, or shed our skin?

On the jury panel is a who’s who of Iranian film. Visit farhangfilmfest.org for an upcoming list of attendees, subject to availability due to the current U.S. government’s travel ban.

The noted jurors are:

Mark Amin, CEO of Sobini Films and former Vice Chairman of Lionsgate Entertainment, he also serves as Vice Chairman of the Board of Trustees of Farhang Foundation and Farhang’s film festival Committee Chair.

Soheila Golestani, the star of such critically acclaimed films as TODAY and WE HAVE A GUEST, as well as the director of the powerful drama TWO.

Roya Teymourian, the award-winning theater and film actress and star of such notable films as WOMEN’S PRISON and the arresting and emotional drama HADJI SHA.

The annual Farhang Foundation Short Film Festival highlights the growing Iranian film industry as well as the cadre of talented filmmakers working around the world who focus on themes of Iranian culture. Since 2009, the festival has awarded more than $160,000 to filmmakers. The short film festival is the only one in the nation of its kind and is devoted to fostering cultural understanding and awareness of Iranian art and culture.

The festival is open to filmmakers of any background. The only requirement is that the film pertains to an aspect Iranian culture, such as the arts, history, lifestyle, crafts, geography, and politics. The top three winners on September 30 will receive cash prizes of $10,000, $5,000, and $3,000. The films are all subtitled in English and can be screened by the public at FarhangFilmFest.org.

This year the event is at UCLA’s Schoenberg Hall, and is presented in collaboration with the prestigious Herb Albert School of Music, one of Farhang Foundation’s newest cultural partners in Los Angeles.

Tickets: $45, available online via Ticketmaster.com and in person at the UCLA Central Office

To view the film, speak with the artists, or tickets to the festival, please contact roxie@roxiepr.com.

Farhang Foundation is a non-religious, non-political and not-for-profit foundation established in 2008 to celebrate and promote Iranian art and culture for the benefit of the community at large. The foundation supports a broad range of academic activities in Southern California by funding university programs, publications and conferences. The foundation also supports diverse cultural programs such as the celebration of Nowruz, Shabe-Yalda, Mehregan, theater and dance performances, film screenings and poetry readings in Southern California. And, in cooperation with various cultural and academic institutions, Farhang Foundation funds major programs and exhibitions about Iran and its culture. However, the content, viewpoints or biases expressed by individual artists, academics, institutions or events supported by the foundation belong solely to each individual party and do not necessarily reflect the views of Farhang Foundation.