HH Sheikha Jawaher Al Qasimi: “Fine arts is one of the pillars of the foundation laid down by Sharjah and it's also serves to empower women.” 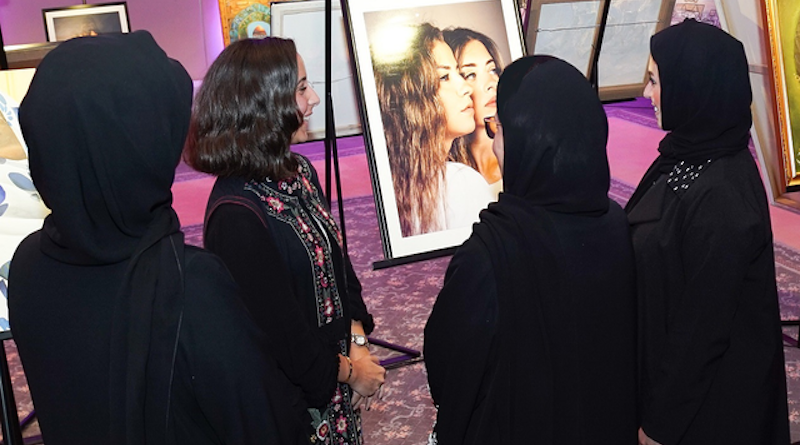 25th October, 2017, Sharjah (UAE): In the presence of Her Highness Sheikha Jawaher bint Mohammed Al Qasimi, wife of His Highness the Ruler of Sharjah and Chairperson of the Supreme Council for Family Affairs, seven outstanding female artists were presented with top honours at the Noon Arts Awards ceremony at Collage Talent Centre, an affiliate of Sharjah Ladies Club (SLC).

Themed ‘Huwiyyati – My Identity’, the Noon Arts Awards is organised by SLC with the aim of recognising and honouring talented women and girls in the fields of painting and photography.

Her Highness Sheikha Jawaher bint Mohammed Al Qasimi said: “Art is a humanitarian language that allows people to share ideas, dreams and visions. It is a bridge to many cultures and one which we can all appreciate in its many forms.” 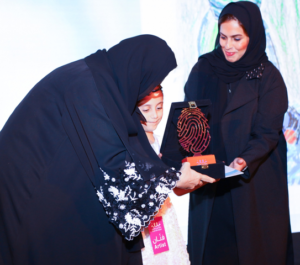 Highlighting the presence and active role of female artists in the UAE’s history of creativity, Sheikha Jawaher Al Qasimi said: “Giving attention and care to women’s experiences in Fine arts is one of the pillars of the foundation laid down by Sharjah and it’s also serves to empower women and help them to succeed in so many aspects of their lives, whether that is their role in an artistic community, a business capacity or a progressive society.

“The UAE has witnessed an impressive growth in the quality of art production and participation in local and Arab exhibitions and with continued support, it will add to its achievements.”

Her Highness praised the artistic value of the paintings and pieces of art created by women as well as the immense natural talent reflected in their entries. Sheikha Jawaher underlined the importance of these awards and exhibitions in discovering fresh artistic abilities, which can add richly to the local and Arab art movement with support and encouragement.

Khawla Al Serkal, Director General of SLC, said: “Sharjah is widely known as a beacon of science, culture and art. It has always emphasised art as one of the most important gauges of human development and regards it as one of the key criteria to measure human civilisation and the progress of nations.”

She added: “Our belief in the importance of art has led us to organise the Noon Arts Awards under the theme ‘Huwiyyati – My Identity’, so that we can encourage artists to explore the questions dealing with the concept of identity and individual existence. It also aims to demonstrate the prominent role society plays in shaping their personalities, their priorities and their lives as artists.”

Sheikha Al Suwaidi, Manager of Collage Talent Center, said: “Choosing ‘My Identity’ as the theme for the Noon Arts Awards is in alignment with the vision and goals of the Collage Talent Center to fully develop creativity in female artists. Through this award we aim to provide the tools, confidence and belief to support them and reach their true potential.”

Al Suwaidi pointed out that the works of art that won the exhibition’s awards were selected according to a series of strict criteria. “In the first phase, the artworks were judged on their conformity to the topic of the exhibition, based on explanation and interpretation. In the second phase, the jury addressed artistic techniques and creative effort. As a result, 63 artworks were selected from 292 submissions, seven of which won first prizes,” she said.

The gallery will be open to the public following the opening ceremony, which will include the selected artworks at the Noon Art Gallery of the Collage Talent Center from 25 – 30 October. The exhibition opening timings will be from 9am – 8pm during weekdays and Saturday, and from 3pm – 9pm on Friday. A number of technical workshops including handcrafts and painting sessions provided by the sponsors will be organised on the sidelines of the exhibition. For more information please visit www.slc.ae/noonartawards.

The gallery is sponsored and organised in partnership with a number of organisations and entities, including Tilal Properties (Gold Sponsor) and Sharjah Islamic Bank (Silver Sponsor), while support sponsors include Canon, University of Sharjah, American University, Sajaya Young Ladies of Sharjah and Emirates Fine Arts Society.

Established in 1982, SLC is a subsidiary of the Supreme Council for Family Affairs and is dedicated to facilitating leisure and educational activities for women and children. The club organises an array of events that relates to society, art, health and charity, with its activities including bazaars, exhibitions, sporting events, entrepreneurship workshops and professional development seminars.

From Intent to Impact