Wife of His Highness the Ruler of Sharjah and Chairperson of NAMA, Jawaher Al Qasimi: True investment in women’s potential and capabilities will lay the groundwork for a global economic jump. 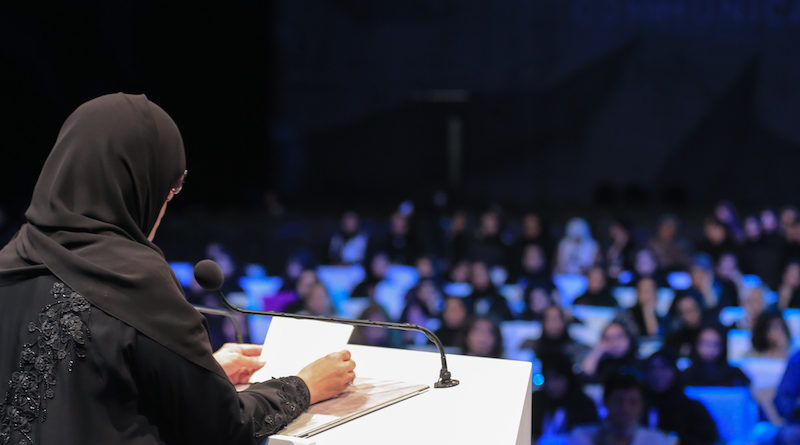 November 25TH, 2017, Sharjah (UAE): Her Highness Sheikha Jawaher bint Mohammed Al Qasimi, wife of His Highness the Ruler of Sharjah and Chairperson of NAMA Women Advancement Establishment (NAMA), has called on governments, business communities and civil societies across the world to adopt more effective policies for the economic empowerment of women and an enhancement of their role in sustainable development.

Sheikha Jawaher Al Qasimi made the call as the UAE is set to host the first edition of the Women Economic Empowerment Global Summit (WEEGS), which is being held by NAMA in partnership with the UN Women on December 4-5 at Expo Centre Sharjah. The two-day summit has been convened to further the United Nation’s 2030 Agenda for Sustainable Development, which was adopted by the UN General Assembly in September 2015.

Sheikha Jawaher highlighted the negative feedback loop of gender inequality in the workplace, saying that the world loses billions of US dollars daily and genuine opportunities to enhance direct and indirect investments because of the imbalance, a situation that further weakens women’s ability to participate in economic development.

“It is time for investment in the precious human resource that is women to take a significant leap forward. Women are essential partners in communities’ economic infrastructure. No country can achieve its peak intellectual and economic output without providing a legislative structure that lays the groundwork for a global economic system based on the principle of gender mainstreaming and equity,” said Sheikha Jawaher Al Qasimi.

“We are all required to take up our moral, political and humanitarian responsibilities towards millions of girls, women and children who have been living under the poverty line for decades. We all – countries, governments, companies and individuals – share a collective responsibility for denying millions of women around the world the ability to work, produce, create and innovate, consequently preventing them achieving economic independence and restricting their role in growing their societies,” Sheikha Jawaher Al Qasimi continued.

Her Highness, the NAMA Chairperson, called on business sectors in the region and the world to adopt action strategies and programmes for the implementation of the principle of gender equality and the empowerment of women in the workplace and job market.

“We call on the private sector to do more to engage women in the workplace in order to revitalise the world economic cycle. Tapping into their potential can add trillions of dollars to the global GDP over the next few years, according to estimates by the World Economic Forum. Studies by UN Women show that $28 trillion could be added to the global GDP by 2025 if women are given equal opportunities and access to job markets and entrepreneurship,” said Sheikha Jawaher Al Qasimi.

Her Highness Sheikha Jawaher said the first edition of the WEE Global Summit would provide an international platform for the forging of partnerships to achieve equal opportunities and gender balance by motivating the private sector to submit commitments to empower women in the workplace and in the production cycle away from honorary positions and formal appointments.

“The commitment of the public and private sectors should not stop at appointing women in positions that allow them to achieve creativity and excellence, they should also support women entrepreneurs who have taken bold steps and set up their own businesses by awarding them bids, contracts and procurements that ensure their enterprises can prosper and grow,” added Sheikha Jawaher Al Qasimi.

Sheikha Jawaher Al Qasimi cited the UAE’s leading experience in women’s empowerment, highlighting that since its establishment it has implemented a strategy for equality, thanks to its wise leadership, which has given women their full rights to education and work. Her Highness pointed out that today Emirati women are entrepreneurs, ministers, ambassadors, pilots and doctors and drew attention to the UAE being ranked first in the GCC and second in the Arab world in the World Economic Forum’s Global Gender Gap World Report. Her Highness also highlighted that the UAE ranked second globally in the index of wage equality for the same job.

Sheikha Jawaher Al Qasimi praised the UAE’s announcement of the allocation of $5 million annually for UN Women for three years, as of 2018 – an initiative that she said illustrates the UAE’s firm commitment to supporting efforts for women’s empowerment globally.

The first edition of WEEGS is being held under the patronage of the His Highness Sheikh Dr Sultan bin Muhammed Al Qasimi, Member of Supreme council Ruler of Sharjah and wife of His Highness, Her Highness Sheikha Jawaher bint Muhammad Al Qasimi, Chairperson of NAMA and Honorary Patron of the Global Women’s Inclusion Initiative, with the aim of achieving the United Nation 2030 Agenda’s Sustainable Development Goals (SDGs), which were adopted by the organisation’s General Assembly in September 2015.

The first ever WEEGS summit represents a significant collaboration between NAMA and UN Women who are joining hands to support and empower women economically in line with NAMA’s support to the global programme ‘Equal Opportunities for Women Entrepreneurs,’ which is being implemented locally with the aim of ensuring gender equality in the field of entrepreneurship in Sharjah and the UAE.

NAMA is calling on those who would like to take part at the first ever WEEGS to register at: http://weesummit.com/register.