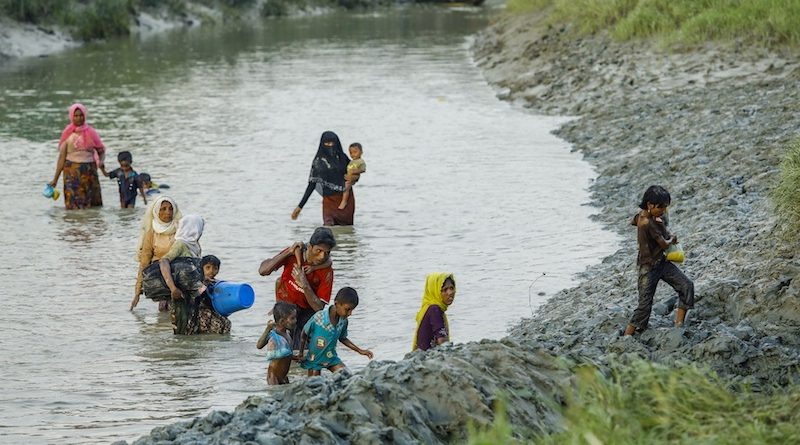 Displaced Rohingya refugees from Rakhine state in Myanmar cross a river near Ukhia, near the border between Bangladesh and Myanmar, as they flee violence on September 4, 2017. A total of 87,000 mostly Rohingya refugees have arrived in Bangladesh since violence erupted in neighbouring Myanmar. Around 20,000 more were massed on the border waiting to enter, the UN said in a report. K.M. ASAD/AFP/Getty Images
by ANANKE March 1, 2018

Since the eruption of violent conflict in Rakhine State, Myanmar, many thousands of refugees have since crossed the border into Cox’s Bazaar, Bangladesh. Discrimination and marginalisation is nothing new for the Rohingya and they have been fleeing persecution and crossing the border into Bangladesh for decades in search of safety, however the current crisis taking place is unprecedented. Bangladesh bears a heavy burden in accommodating the many thousands of Rohingya who have poured in from across the border in search of safety. UN Women in their gender brief explain that the current crisis situation disproportionately affects women, girls along with the most vulnerable and marginalized Rohingya refugee population groups. Integrating gender equality measures into the refugee response is a critical means of ensuring that women and girls and in particular the most vulnerable and marginalised, are able to access and benefit from relief services and information on an equal basis. Many of the women and children have witnessed horrific acts of violence including rape which is considered a weapon of war. Major-General Patrick Cammaert, a former commander of the UN Peacekeeping forces, argues that rape as weapon of war, tears communities apart, punishes men and punishes women by carrying out acts in front of the men. The act itself is a form of torture and inflicts long lasting psychological harm. It humiliates, dominates, and instils fear into civilians and forces civilians to relocate, destroying their communities.  UN Women Executive Director, Phumzile Mlambo-Ngcuka, in an address on February 3 2018 which concluded a five day visit to Bangladesh, gave praise to the government of Bangladesh, as well as its people, for its generosity in welcoming the Rohingya despite its own priorities and its efforts to address needs of women and girls and protection of their rights and dignity during this world’s worst humanitarian crisis. UNICEF estimates that of the 656,000 Rohingya refugees that have crossed the border into Bangladesh, sixty percent are children. Many of these children arrived unaccompanied. The children are extremely vulnerable to violence, abuse and exploitation. One such vulnerability is the risk of succumbing to the human trafficking trade and in particular girls who can end up in domestic servitude or forced marriage. Disease outbreaks are of major concern, as is the risk of malnutrition. Rohingya children have witnessed terrible atrocities which have deprived them of a childhood. They have also been denied citizenship, access to education and health care, The Rohingya have endured deprivation of the most basic rights through the implementation of discriminatory laws. 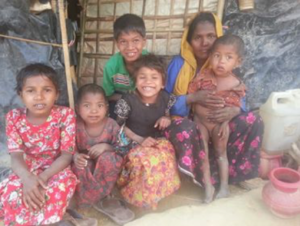 Arofa Begum(32) She has five children and lives in Kutupolong Refugee Camp. 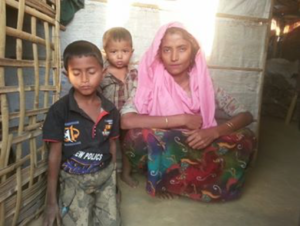 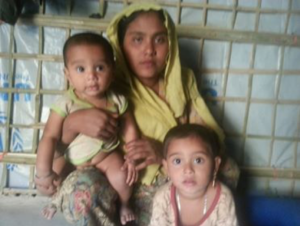 Hamida Begum(22) A widowed mother with two children whose husband was murdered. 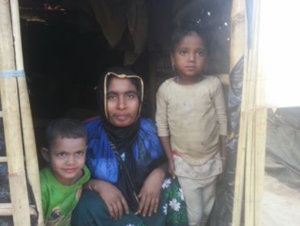 There are many grassroots campaigns occurring around the world in support of the Rohingya, and Anne Firth Murray, academic and founding president of The Global Fund for Women, argues in her book, From Outrage to Courage that positive change and the amazing accomplishments of individuals and groups at the grassroots level of societies often goes unnoticed. It is the courage displayed by women who come face to face with darkness and shine a beacon of hope and optimism that outrage isn’t a final destination. Women’s groups and the poetry of women are the source of women’s courage and what underpins the change. Impoverished women who work tirelessly despite the odds to create change are often a strong force in putting justice at the centre of advocacy and insistence on human rights.  Ananke interviewed an array of dedicated humanitarians with much of the campaigning and advocacy being carried out on a voluntary basis. Lindy Banks is an Australian refugee advocate who became concerned about the dire situation of the displaced Rohingya and particularly the single women and children. Lindy, along with Helen Thomas, are dedicated and committed to ensuring that funds go directly toward providing assistance to Rohingya women and children. The funds will be used to purchase food, build and repair huts, provide blankets for the cold nights and mosquito nets to prevent outbreaks of disease. Lindy explains to Ananke that on the ground a trusted team of volunteers, who are Rohingya refugees themselves, work tirelessly on the ground and around the clock to provide assistance to the new arrivals. The women and children have been forced to leave everything behind with uncertainty about what the future holds for them. When the current winter season draws to a close in Bangladesh, challenges lie ahead with the upcoming monsoon season. Huts can quickly transform into vulnerable households and succumb to landslides and flooding.

Although the magnitude of the crisis is immense and the provision of services seems like a dubious task, Lindy believes that with support of donors, we can make a real difference to the lives of these women and children. Providing the women and children with these essential items prevents the children from begging. Most children have been denied an education and ensuring they have an adequate standard of living is the first step in having an opportunity to attend schooling. Lindy is liaising closely with Nizar Neezo Swansea, manager from Human Relief Foundation based in the UK to ensure funds are dispersed transparently and used to purchase essential items. Human Relief Foundation works in association with other international NGOs and funding bodies to deliver emergency aid and long term, strategic programmes across the world. After the initial task of ensuring food, blankets, mosquito nets and the building and repairing of huts is carried out, longer term strategies will be required. Many of the women have been trained in tailoring and assistance will be necessary for the purchase of sewing machines so that they can sustain their livelihoods.

You can learn more and support Lindy and Helens work to help Rohingya women and children by visiting: