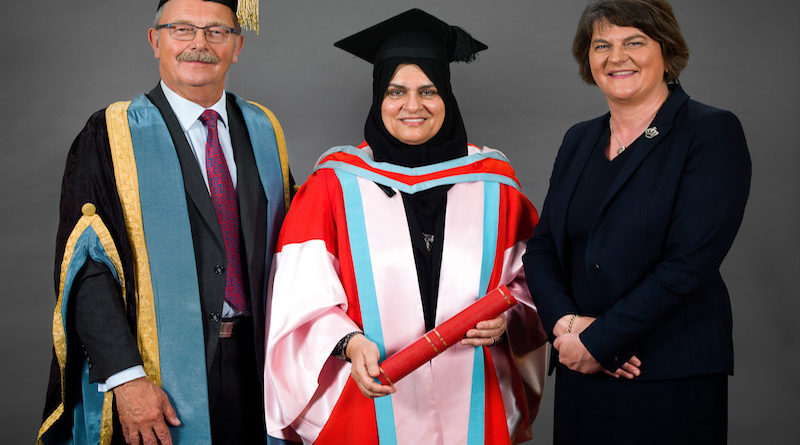 July 23rd, 2018, Dubai (UAE): Dr Raja Easa Saleh Al Gurg, Managing Director of the multifaceted conglomerate, Easa Saleh Al Gurg Group, was awarded with an Honorary Doctorate by Queen’s University Belfast, for services to business and commerce. She was among twelve individuals who received honorary degrees this summer at the university. Other individuals awarded included Professor Martin Meehan, the 27th President of the University of Massachusetts, internationally renowned researchers as well as leaders in business and commerce.

Queen’s awards honorary degrees to individuals who have achieved high distinction or provided significant service in one or more fields of public or professional life, and those who serve as ambassadors for the University and Northern Ireland around the world.

Dr Raja Easa Saleh Al Gurg is a prominent business figure in the United Arab Emirates and is passionate about encouraging women in business and entrepreneurship. She holds numerous positions across the world of business, commerce, health and higher education including that of President of the Dubai Business Women Council. Dr Al Gurg is also a Board Member of Dubai Chamber of Commerce and Industry.

On receiving the doctorate, Dr Al Gurg said, “I am delighted to receive this honour from Queen’s University Belfast. I admire how the university is championing the cause of women in the sphere of business and commerce.” She was joined by her family, as well as Faiza Al Sayed, Vice Chairperson of Dubai Business Women Council, for the graduation ceremony.

Through the years Dr Al Gurg has received many notable accolades. She has been ranked 28th  in the Arab Power 2018 listing of the 100 Most Powerful Arabs, compiled by Gulf Business magazine. She was also listed as the most powerful Emirati Businesswoman in Forbes Middle East’s 2017 ranking.

The Easa Saleh Al Gurg Group LLC  (ESAG), founded in the year 1960, by H.E. Easa Saleh Al Gurg, KCVO, CBE, is a multidivisional conglomerate with 27 companies. The Group has a range of diverse product and business interests that predominantly include retail, building and construction, industrial and joint ventures. The Group has an active presence throughout UAE, Oman and Saudi Arabia. Its reach stretches across Asia, Middle East, the African continent, parts of America, Australia and New Zealand.