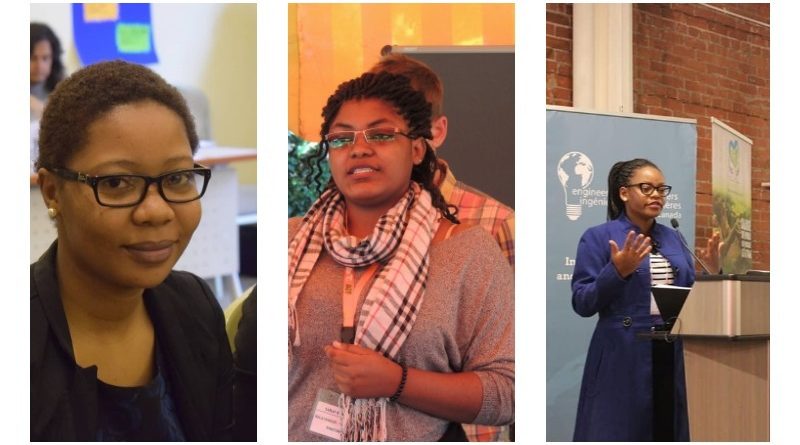 As the world marks International Youth Day 2018, young people are once again on the spot as the expected change that the world is waiting for. We cannot under-estimate the power of young people. The biggest technology and scientific breakthroughs, political revolutions and social innovations across the globe are attributed to people below the age of 35. It is true that young people are the pioneers of social change, economic development and hope for the future.

Women Economic Empowerment in Africa is one of the social and economic objectives for the Continent and globally. This has especially been slowed by prevailing cultural norms which strongly uphold patriarchy and often treats women as second class citizens. Some communities have fixed gender roles that merely confine the woman to the family care-giving role, an important role that is however undervalued, unpaid and unappreciated. The likelihood for girls in those communities to equally access good education, skills and opportunities is severely reduced as the patriarchal idiosyncrasies will only attempt to mould them for their expected future role of being good wives and mothers. Women and girls in Africa often struggle with specific challenges such as sexual and reproductive health care, proper menstrual sanitation and are prone to Gender Based Violence. All these challenges not only affect the fate of women, but by extension, their families and communities, thus preventing us from achieving the SDGs.

With 200 million people aged between 15 and 24, Africa has the youngest population in the world according to the UN Statistics. This carefully places the subtle future of the continent at the hands of its young people. A large percentage of women in Africa are reported to be living in poverty, and therefore it is important that African youth be at the forefront in improving living conditions for women and girls in Africa, as a strategy to end poverty. To quote Kenyan Writer, Ngugi wa Thiong’o, “The condition of women in a nation is the measure of its progress”.

I caught up with five young people from East Africa, who have pioneered incredible social and economic development in the lives of women and girls in their communities. They all have amazing initiatives targeted at achieving SDG5 with a view to create a safer, better and happier world for African women and girls.

Ananke celebrates these five young people today by appreciating their work and recognising their efforts as African Youth Champions for SDG5.

Here are their magnificent stories:-

James is an Inspiring youth taking #HeforShe by example that men should equally participate in improving the welfare of women and girls.

He completed his undergraduate Degree in Social Work and Social Administration from Makerere University in Uganda and a Postgraduate diploma in Project Planning and Management. He is an alumnus of Young African Leadership Initiative (YALI) Regional Leadership Center East Africa – Nairobi. He is also a certified youth trainer, social entrepreneur and youth mentor with vast experience in the education sector, gender equality, child sponsorship, child protection, business and entrepreneurship development. He serves as the Eastern Uganda Regional Officer of an NGO, Educate! whose main objective is to support education for under-privileged girls.

My attention is skewed to his personal initiative, an NGO that operates by the name Imagine Her, which he is a co-founder. The organization works with rural communities to leverage the power and potential of girls and women in creating sustainable communities. He believes in solving the three core society needs (Education Imbalance, Economic Hardships & Sexual/Reproductive and Maternal Health Gaps) among women and girls in Uganda through implementation of programs specially designed to provide tailor made solutions.

In one of their projects called re-PAD, the organization trains school children and community members on how to make, use and maintain re-usable sanitary pads to promote menstrual hygiene and health among women and girls. This is also aimed at increasing the retention and completion of education among girl children especially in primary schools.

James maintains that by including men and boys in the program, they try to break the taboos associated with menstruation in society and ensure that men and boys can equally support women and girls manage menstruation normally.

His message to fellow young men is to play a role in creating a better and safer world for women and girls. He suggests that from a tender age, young boys should be taught to appreciate and respect girls and women so that they may grow up to be husbands and fathers who fully support their wives and daughters to develop economically. 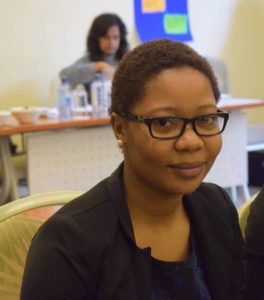 Saumu is a social-change maker and community leader with a strong desire to contribute towards achieving gender equality in Africa. She has effectively utilised her Bachelor’s degree in Community Development to create and coordinate programs targeted at bringing social change. Her leadership skills qualified her to attend Cohort 12 of the Young African Leaders Initiative (YALI) Regional Leadership Centre in Kenya. The program equipped her with business and entrepreneurship skills to apply in her initiatives. Saumu is also an alumni of Ignite the Youth in Africa platform through which she led online campaigns, community mobilisation and advocacy dialogues focusing on African women and youth.

Saumu took her passion for community development a notch higher by founding Simama Imara Program. In the quest of achieving SDG 3 and 5, Simama Imara advocates for Gender Equality, Mental Health awareness, Sexual  and Reproductive Health. The program creates safe spaces for teenage girls to express themselves freely in friendly discussions.  The spaces allow young girls to vent out their adolescent challenges as well as other issues grappling their day to day lives without fear of being judged or stigmatised.  The young girls are able to receive psycho-social support through the program. This reduces the chances of depression and ensures emotional wellness of the girls. The program also mentors girls on life skills and career development.

Saumu believes that SDG5 is a key strategy for ultimate reduction of poverty. She urges young people to spare some time and participate in the quest for Gender equality by leading initiatives in their local capacities. 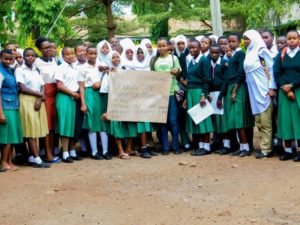 Angel, as she is popularly known, is a final year medical student at Kilimanjaro Christian Medical University in Tanzania. Amid her excitement that she is about to accomplish her dream of becoming a medical doctor in a few months’ time, her busy school schedule does not deter her from mentor girls in her community. Angel believes that empowering young women increases their ability to earn a living and take charge of their economic decisions.

Angel’s inspiration to empower women was engineered when she participated in an online course on how to boost confidence and self-esteem of young African women and impart them with life skills. She has also attended a similar program by the Young Star Foundation of Nigeria.

To disseminate what she had learnt, Angel first partnered with two friends and organized a one-day mentorship session at Mawenzi secondary school in Moshi, Kilimanjaro, which was attended by 96 girls. Angel continues mentoring young girls and hopes to see them overcome their fears, overturn gender stereotypes and use their skills and talents to create meaningful opportunities for themselves. At home, she assists her mother train young women on how to make artistic pieces of attire known as batikis that they can sell to make a living for themselves.

Angel’s message to young people is to actively and passionately take up initiatives that will improve their communities. She advises young people in Africa to stop waiting up for the government to give them jobs but should instead use their brilliant ideas to start something meaningful and thereafter call upon for support and partnerships. 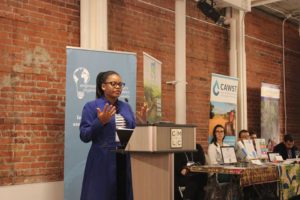 Gladys is a Development Practitioner and a youth champion for change committed to Youth Capacity Development and advancing Gender Equality. She is the founder and team leader of TAP Africa; a teens-focused initiative that aims to raise a generation of young people, who are alive to the challenges affecting their communities and are eager to create sustainable solutions. Gladys and her team frequently engage teens in learning and addressing some of the social challenges they face, with a view to raise a generation of socially aware, responsible, and proactive young agents of social change.

The Teens Weave Stars to End Violence (TWSEV) Campaign is a successful outcome of TAP Africa. Now in its third phase, the project aim is to equip young people with life skills, knowledge about Gender Based Violence, and art skills to enable them become advocates of ending GBV in their schools and communities.

Gladys was devastated by Statistics from the 2014 Kenya Domestic Household Survey (KDHS) which indicated that 38% of women in Kenya aged 15-49 reported physical violence, 14% reported sexual violence, with most cases evading from being reported. Kenya Police Service also reported to have received 3,596 defilement cases; 913 of rape; 242 of incest and 124 of sodomy in the latest crime report. Following the alarming rates of GBV prevalence in her Country, TWSEV was an immediate priority for Gladys. In addition to facilitating school sessions to educate youth on GBV, the initiative has engaged over 1000 teens in four Counties in Kenya to weaving stars using paper ribbons; a fun-activity that symbolized lighting up the darkness of violence in their lives and communities. Over 7500 stars were weaved by teens and facilitators. The stars were displayed at the 2018 Commonwealth Games in Brisbane, Australia as part of the “One Million Stars to End Violence Campaign.”

Gladys strongly believes that the youth have an important role to play in shaping the destinies of their countries and must take responsibility by championing for social change. She remarks that Gender Equality should be at the core of their work as it cuts across the other SDGs and its benefits are invaluable. 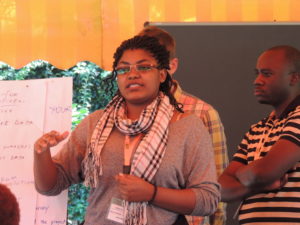 Lulu is a programmer and software developer well graduated in Information Technology amidst the stereotypes surrounding women in Tech. After completing school, she joined an organization known as Buni-hub for an internship program where she created a lasting impression through her work and launched her career in community empowerment.

She is among the founders of an initiative known as Be a Lady which has generated an amazing innovation, ‘Bela Vendor’, an automated and mobile Sanitary dispenser to provide sanitary towels for girls and women.  The idea came to mind when she digested the shocking statistics of a survey conducted in her home town in Dar-es-salam that 50% of school girls missed 4 to 5 days of school every month because of lack of access to menstrual sanitation, adversely impacting on their studies.

The organization won an innovation challenge sponsored by COSTECH and Data Lab for Impact (DLI) and was awarded a grant to support the Bela Vendor initiative. Lulu and her team utilized part of the funding to conduct research on menstrual hygiene with the aim of contributing more data on the neglected topic. So far, Bela dispenser is being used in two secondary schools in Dar-es-Salaam. Thanks to Be a Lady, the teenage girls can now comfortably attend classes during menstruation as they are assured to pick free sanitary towels from the Bela dispenser.

Lulu’s message on International Youth Day goes to Investors, donors and the Government. He urges the bodies to support youth ideas by creating partnerships and issuing grants that can help progress their initiatives to viable businesses and Organizations which they can use to improve the world.

The Day She Lost Her Face