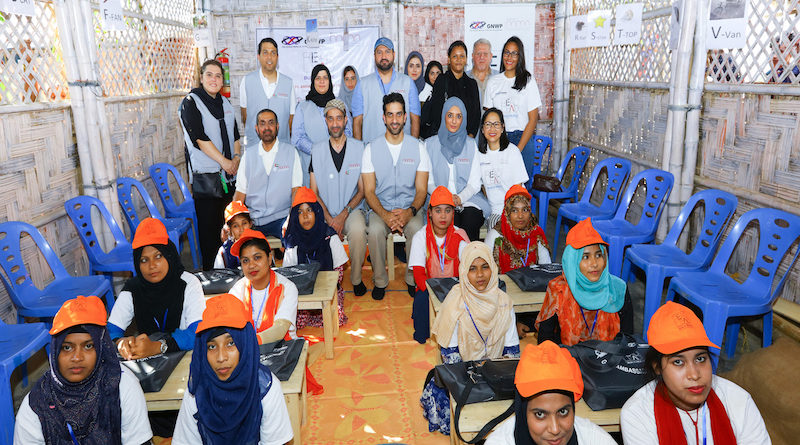 Delegation’s visit to Girl Ambassadors for Peace Programme in Bangladesh.
by ANANKE November 12, 2018

November 12th, 2018, Sharjah UAE: NAMA Women Advancement Establishment (NAMA) has launched the Girl Ambassadors for Peace (GA4P) programme in collaboration with Global Network of Women Peacebuilders (GNWP) in Bangladesh, to bring leadership skills to the nation’s local women and female Rohingya refugees, under the directives of Her Highness Sheikha Jawaher bint Mohammed Al Qasimi, Wife of His Highness the Ruler of Sharjah, and Chairperson of NAMA.

The programme aims to train 400 Bangladeshi young women and girls, and Rohingya refugees residing in Bangladesh who are 16 year-old and above. According to the United Nations High Commissioner for Refugees (UNHCR) report, females constitute 53 per cent of the 900,000 Rohingya refugees in Bangladeshi camps and the majority of families that identified with at least one protection vulnerability in Cox’s Bazar district are single mothers (16 percent).

Through its four pillars of leadership, literacy, peacebuilding and economic empowerment, the GA4P programme will assist its 400 participants to assume their role effectively in nation building.

The first training session has been held in the Balukhali camp in Cox’s Bazar district.

The delegation met with the programme’s participants, local leaders and representatives of socioeconomic organisations who highlighted the tremendous ways in which GA4P can unify efforts of local communities, the civil society and international community organisations to empower women with professional skills, leadership qualities and other life skills, which will help them deal with crises, unemployment and growing violence and extremism in their local communities.

Only 52 percent of the girls aged 6-14 receive education in these camps, while the ratio drops to 4 percent in the 15-18 age group. Through its intensive capacity building training GA4P will share their skills with the young Rohingya women and girls, as a response to these limited opportunities they have for schooling or professional skills development.

The programme aims to develop a different kind of ambassador: one that acts, as well as teaches. The Bangladesh training will see these women being trained in two different groups – young women aged 17-22 who will undergo intensive literacy, financial management, social media and economic empowerment. These girls will then take their skills to train the second group comprising of older women and mothers.

The programme was earlier conducted in Indonesia, where 62 women and girls received training in leadership, volunteering, crisis management, and emergency relief. This training allowed the 62 GA4P graduates to assist in the rescue operations that followed the deadly tsunami that hit Indonesia. They successfully aided 200 families and provided them with supplies and lifesaving support.

HE Reem BinKaram, said: “NAMA’s strong outreach at both local and international levels results from the unwavering support and guidance of His Highness Sheikh Dr. Sultan bin Muhammad Al Qasimi, Member of the Supreme Council and Ruler of Sharjah, and his wife, Her Highness Sheikha Jawaher bint Mohammed Al Qasimi. Their continued support has extended our reach to new territories, where we have amplified women’s voices and boosted their contributions to peacebuilding. Promoting GA4P is integral to the UAE’s humanitarian efforts. Through these efforts, we take Sharjah’s and the UAE’s humanitarian message to the world.”

“In NAMA, we believe empowered and capable women form the cornerstone of society. These women will transfer their knowledge and experience to their families, their children and people in their communities,” she further noted.

BinKaram pointed out that the GA4P programme will be implemented in more countries due to its importance in achieving the UN sustainable development goals.

“After training 62 Indonesian girls and women, GA4P is now in Bangladesh to promote women’s leadership and their role in preventing violent extremism. It is a confirmation of the world’s faith in women to take a large part of responsibility for achieving sustainable development,” she said.

BinKaram stressed that the advancement of societies is a highly important issue, and NAMA’s role falls within the greater role of the UAE, which is ranked among the world’s top humanitarian contributors.

NAMA announced its support to the GA4P programme for the first time during its participation at the 2016 UN General Assembly, which saw them enter a strategic partnership with the implementers of the programme – Global Network of Women Peacebuilders (GNWP).

This partnership reflects the growing belief of international and regional organisations in the need to strengthen developmental efforts that will eliminate the root causes of crises, and align efforts to activate the global roles of women to positively impact their societies and economies. The GA4P programme is a qualitative step in NAMA’s drive to expand the scope of its work with women to include more regions suffering from crisis.

The GA4P programme focuses on Rohingya refugees in Bangladesh and Indonesia, which hosts the largest number of people from this community who have suffered the worst modern-day exodus. The sufferings of Rohingya refugees are unprecedented and pose one of the biggest challenges before UN organisations as well as the international community.

Our core philosophy at NAMA is to raise awareness that women are an indispensable human resource for the development of every nation. NAMA was conceived to go beyond the remit of supporting women and ensuring gender equality to a broader scope that aims to see women become influential key members of society, thereby enabling them to climb the ladder of success.

A Digital Internship That Empowers