A UAE-wide campaign has been launched by Manchester City FC to get more girls playing football in the country. 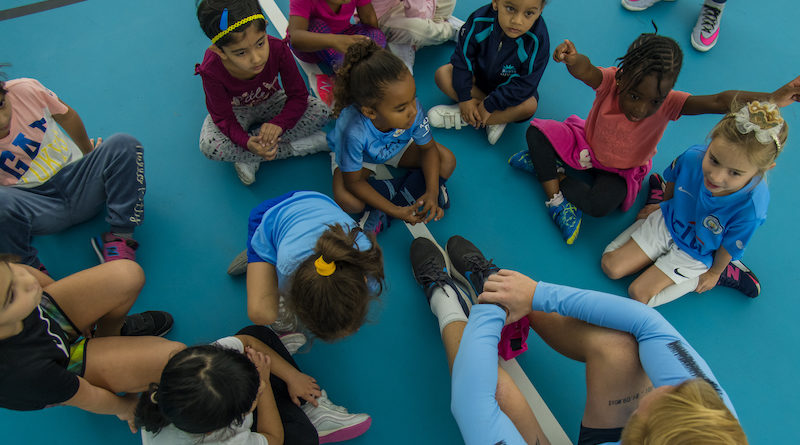 February 17th, 2019, Dubai (UAE): World famous, Manchester City Football Club is running a new programme in the UAE to encourage more young female footballers to play the sport. It is part of the club’s global initiative titled “Same Goals” which will run until the end of the season.

Organised by City Football Schools UAE – which operates in Abu Dhabi and Dubai – the #SameGoals training sessions aim to provide girls with even more opportunities to play the game and inspire the next generation of female footballers. 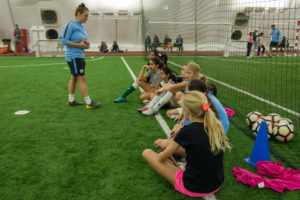 The initiative was launched at the Armed Forces Officer Club in Abu Dhabi, capital of the UAE, where more than 75 girls belonging to different nationalities took part in an array of skill challenges. The girls also participated in a mini-tournament.

Former Manchester City Player Elle Charney – the first female coach in the City Football Schools across the UAE – was also present and was delighted with the response throughout the first series of coaching sessions. “What has been amazing is to see so many girls from different backgrounds loving to play football and really wanting to improve as much as possible,” she commented.

Adding, she said: “In Manchester, we have heard about the success of City Football Schools in the UAE and through the Same Goals initiative, we can take that to more young female footballers which is fantastic. On a personal level, as the first female coach coming from Manchester to the UAE, I really want to show the girls that there are no barriers at all for them– it is going to be great to coach them and follow and nurture that progress.”

To enter #SameGoals, girls who are aspiring to be footballers, or those giving it a try for the first time, are encouraged to post a video on Twitter or Instagram that shows them scoring – or saving – a goal. 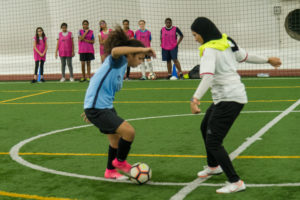 The goal can be scored, or saved, anywhere using any kind of ball; the more creative, the better. For every video posted using #SameGoals and tagging @ManCity, the Club will send out a football so she can keep playing.

To get involved with girls’ football at City Football Schools in the UAE visit https://uae.cityfootballschools.com/

Formerly known as Manchester City Ladies FC, the club was founded in 1988 by City in the Community. In the 30 years since then, their affiliation with the men’s team has taken various forms, culminating in the statement of a formal partnership with Manchester City in August 2012. The Club was granted entry to the FA Women’s Super League in April 2013 and subsequently re-launched as Manchester City Women’s Football Club in January 2014. In 2016, Manchester City opened their girls’ academy having received tier 1 status from the FA for a Regional Talent Club and now provides eighty young players from U10 level upwards elite training to maximise their potential

The Club mirrors and benefits from its association with its male equivalent and is structured in all aspects of its operations to take advantage of the resources of the wider organisation – from community programmes, to youth development, scouting, coaching, sports science, digital coverage and first team football operations.

In their inaugural season under manager Nick Cushing, Manchester City made history when they clinched their first ever trophy, the FA WSL Continental Cup. In the 2015 campaign, the Club finished second place in the FA WSL and with it secured their place in the UEFA Women’s Champions League, which they have competed in for the last three seasons. In 2016, the Club celebrated their most successful season to date being crowned the FA WSL Champions for the first time in their history, lifting the FA WSL Continental Tyres Cup for a second time and becoming Women’s FA Cup winners in another historic first.

The team, which includes multiple England internationals, play their home games in the 7,000 capacity Academy Stadium at City Football Academy, the facility which they share alongside the men’s and academy teams.

Let’s Elevate our Thinking with Art