ABAAD’s vibrant team, led by the Founder and Director Ghida Anani, discusses with Ananke’s Ilsiia Idelbaeva about gender equality in the MENA region and an implementation of the programmes towards achieving it. 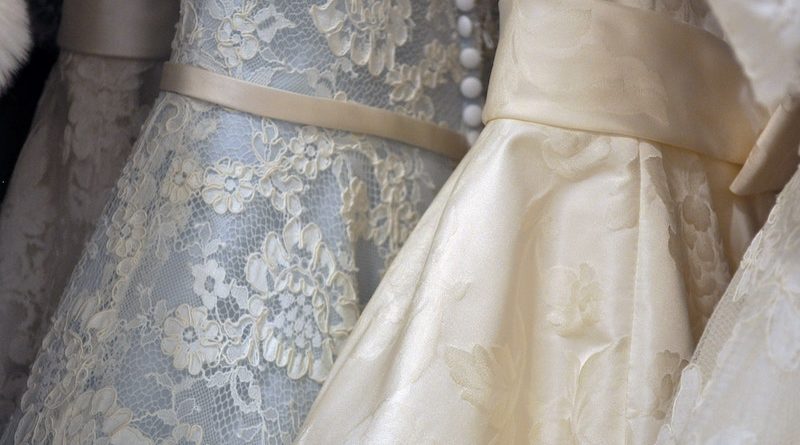 ABAAD’s campaign under the title “A White Dress Doesn’t cover the Rape” during the 16 days of Activism to end violence against women, as part of the process of demanding the abolishment of article 522 of the Lebanese Penal Code

ABAAD – Resource Center for Gender Equality is a UN ECOSOC accredited organization that aims to achieve gender equality as an essential condition to sustainable social and economic development in the MENA region.

Tell us about the ABAAD– when was it formed and the reason behind its establishment?

ABAAD was established in 2011, the Director and founder Ghida Anani had a vision for creating a model of quality care and services coupled with creating an organizational culture of professionalism and activism. In order to model this vision, she founded ABAAD.

The dynamic team is comprised of dedicated activists, lawyers, consultants, social workers and researchers, who creatively test new approaches as part of a larger effort to achieve an equitable society, free of hegemonic masculinities and violence against women.

As a leading actor on gender equality in the region, ABAAD is perceived as a reliable reference and partner by the local, regional and international entities that promote gender equality, peacebuilding and sustainable development.

ABAAD has been the co-chair of the National Technical Task Force to End GBV (gender-based violence) against Women and Girls (alongside the Lebanese Ministry of Social Affairs) since 2012. ABAAD advocates for the development and implementation of policies and laws that enhance women’s effective participation, through a rights-based approach that would bring about tangible change to gender justice. With the purpose of ending gender-based violence, ABAAD adopts a holistic care approach to provide protection and support services to GBV survivors\right holders during times of peace, war and disasters.

As a leading agency on gender equality in the MENA region, ABAAD seeks to support and build the capacities of local, regional and international entities that are working to promote human rights, democracy and peacebuilding. Through its pioneer ‘’Masculinities’’ program, ABAAD also seeks to effectively engage men in working towards achieving an equitable society, free of hegemonic masculinities and violence against women.

How would you describe the current gender equality situation in MENA region?

The current situation in the MENA region is volatile at best. While there has been some legislative progress in Lebanon (e.g. repeal of Law 522), there is a general lack of participation of women in politics, harmful laws and legislation that disadvantage women, including laws about domestic violence that do not fully protect women and are incomplete, a significant gender wage gap, as well conflict in the region that hinders progress in the field of gender equality.

ABAAD launched several projects related to Masculinities. Can you tell us about the role of men in promoting gender equality? What are those projects and how they work? 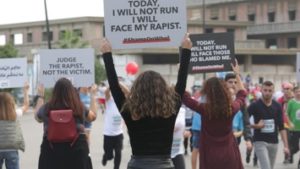 ABAAD’S #ShameOnWho? campaign on the 16 Days of Activism against Gender-Based Violence 2018, Lebanon.

ABAAD has a wide range of activities/ interventions in several fields such as gender equality, advocacy, primary prevention, emergency response, SRHR and sexuality, masculinities among them. Each program has a designated page, and specific products and IEC materials.

Across the globe and the Middle East North Africa (MENA) region, there is mounting recognition that men and boys are key allies and partners in preventing all forms of violence against women and girls. In the past few years, ABAAD has played a critical role in engaging men, boys, and fathers to promote gender-equitable attitudes and practices through various programs and initiatives, such as Program P, whichworks on engaging men in active positive fatherhood and caregiving, during the entire time period covering their partner’s pregnancies through their children’s early years;Program Ra, a strategy and capacity building training manual on working with young men around issues like non-violence, SRHR, substance abuse, and gender equality;and Program P-ECD – a gender transformative methodology with a special focus on early childhood development (ECD). The main pillars that ABAAD masculinities and engaging men and boys’ programs focus on are:

ABAAD created the Gender-Equality cross-cutting program called “Gender Mainstreaming” in the frameworks of which several training sessions are organized. Can you tell us more about it? What do the trainings include and who is the target audience?

Gender mainstreaming is an approach that ABAAD has adopted throughout their programmes, and with all partner organizations. It entails inserting information about gender equality and gender-based violence acrossprograms and supporting partner organizations work on this basis as well. For this initiative, ABAAD’s work focuses on three different areas:

In collaboration with Oxfam, ABAAD conducted a gender situation and vulnerability assessment among Syrian and Palestinian refugees arriving from Syria to Lebanon. The qualitative research was conducted with over 150 people through focus group discussions and individual interviews with refugees and key people.The aim of the “Shifting Sands: Changing Gender Roles Among Refugees in Lebanon” study was to explore people’s experiences related to how their gendered social economic roles are changing, and the negative and positive effects these changes are having on their lives, the areas investigated included: changes to gendered norms, values and identities;changes in people’s physical safety and emotional wellbeing; changing gender control over resources; and gendered access to aid and basic services. The study was shared and presented during the National GBV Taskforce meeting, as well as with targeted lists of active local and international NGOs working on responding to the crisis. It has also reaped the interest of severalfrontslike Human Rights Watch (HRW), World Food Programme (WFP), UNHCH, Caritas, and Carnegie among others.

ABAAD published the “Playing for Gender Equality toolkit”, which aims at developing children’s awareness of gender-equality related issues through interactive games. How important it is to teach children gender-related concepts and what possible change of gender equality situation it makes for young generation? 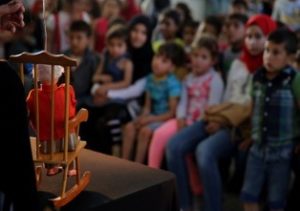 “Playing Gender Equality” is a program aimed at youth’s education on concepts of gender equality. This includes The Activities Manual,composed of fun and interactive games for children aged eight to 12 years old, that will facilitate the learning of important concepts and terminology pertaining to Gender Equality and to also address thematic areas including: Gender roles, Partnership, Gender Equality and Violence. The toolkit is accompanied by additional videos, guidebooks for facilitators, coloring book, poster and stickers. In the frameworks of this program, the Save Me mobile app game was launched. It is a fun game designed for kids (eight-12 years) to learn new things about partnership, gender and protection.

It is very important to introduce children to gender concepts to help them be more attentive and able to engage in gender discussions later in life.

Currently ABAAD is replicating its work in Lebanon. Do you plan to expand your work to other MENA countries?

What future impact do you think ABAAD will bring to gender equality in Lebanon and across MENA region?

Hopefully ABAAD has impact on several dimensions for the future. One of those dimensions is policy reform in Lebanon, we have already been able to have an impact on this level with Law
Undress 522 campaign, #lifeforlife campaign, as examples.

To contribute to gender equality in the MENA region, ABAAD works to attain its following primary goals:

The entire team of Ananke warmly congralats ABAAD for winning the First Prize UN SDG Action Award for its groundbreaking campaign #Undress_522 for the most impactful campaign. We applaud the organization’s Founder and Director Ghida Anani for dedicating the Award to Lebanon and survivors of rape and sexual assault in Lebanon!

Photo by Anna Docking on Unsplash