In celebration of the achievements of girls everywhere, LEGO®’s latest initiative will invite a family of four to visit its headquarters in Billund, Denmark. 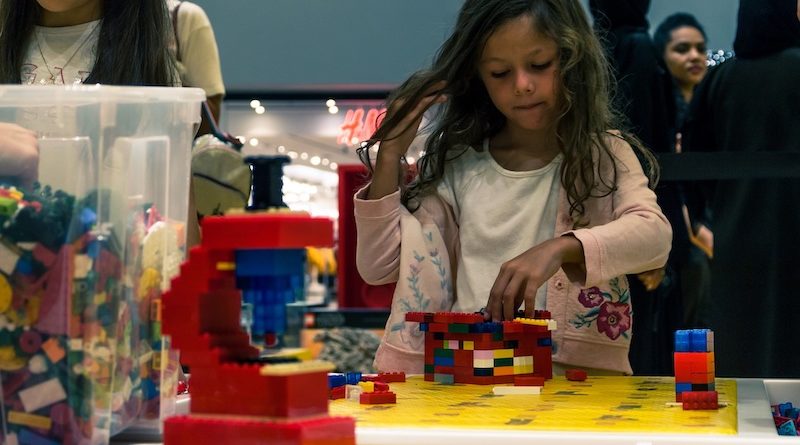 Dubai, (UAE): Summertime is over and it’s time for back to school season, but that doesn’t mean that playtime is over.  This month, LEGO®, the household name that has brought the joy of building into the homes of millions of families around the world, is running a social media competitionwith its latest campaign in the Middle East: #SheBuiltIt.  Born out of LEGO®’s wider initiative, “Imagination Has No Gender,” #SheBuiltIt looks to promote gender equality in play by encouraging children to embrace their individuality and express themselves through original creations.

The social media competition, which runs on Facebook and Instagram throughout the month of September, was developed to inspire the builders of tomorrow by promoting self-confidence through unrestricted play.  Open to families across the UAE, the competition invites parents and their daughters to visit LEGO® Certified Stores where they can create unique builds made entirely of LEGO® bricks. Each week will feature a different theme, including “Your Future Home;” “Your Future Self;” and “Your Favorite Pet,” encouraging young female builders to explore different facets of their imaginations. Using the hashtags #LEGO; #LEGOMiddleEast; and #SheBuiltIt, parents can then submit a photo of their daughters posing alongside their one-of-a-kind creations and be automatically enrolled in a competition that places them in the running to win a trip to the LEGO® House in Billund, Denmark.

On October 11th, 2019, in celebration of the “International Day of the Girl,” this one-of-a-kind opportunity will become a reality for one lucky winner who will be selected based on the number of likes, shares and comments received on social media.  The participant whose post generates maximum engagement will win round-trip tickets for a family of four, including hotel accommodations and a three-day trip to the LEGO® House – a 12,000 square meter experience center that houses 25 million LEGO® bricks. There, one special girl and her family will explore six “Experience Zones” and take part in activities including programming robots in the Robo Lab, producing their very own stop motion video in Story Lab, and building a LEGO® fish that comes to life in a digital aquarium. In addition to the grand prize, three runner-up winners will also receive an exciting LEGO® hamper filled with products from some of the brand’s most beloved line of LEGO® sets.

“We’re thrilled to bring this once-in-a-lifetime opportunity to a young girl and her family in the Middle East with the launch of #SheBuiltIt,” said Urszula Bieganska, Head of Marketing, LEGO® Middle East & Africa. “At LEGO®, we believe that every child should be encouraged to explore the world around them through creative play. With #SheBuiltIt, we want to send the message to young girls everywhere that they are equally as capable as boys to bring to life whatever they can imagine – and have fun doing it too!”

To kickstart the campaign, LEGO® hosted an exclusive event on 7 September at the LEGO® store located at the Mall of Emirates in Dubai, UAE. The event was attended by representatives from the media and social media influencers, all of whom are parents to young girls. In celebration of the achievements of girls everywhere, attendees took part in a fun-filled activity that asked participants to explore their imaginations as they put together unique LEGO® builds that were then displayed in-store for all future visitors to see.

About the LEGO Group
The LEGO Group is a privately held, family-owned company with headquarters in Billund, Denmark, and main offices in Enfield, USA, London, UK., Shanghai, China, and Singapore. Founded in 1932 by Ole Kirk Kristiansen, and based on the iconic LEGO® brick, it is one of the world’s leading manufacturers of play materials.

Guided by the company spirit: “Only the best is good enough”, the company is committed to the development of children and aims to inspire and develop the builders of tomorrow through creative play and learning. LEGO products are sold worldwide and can be virtually explored at www.LEGO.com. For more news from the LEGO Group, information about our financial performance and responsibility engagement, please visit http://www.LEGO.com/aboutus

THE NEST I/O: Creating change-makers by tapping into the potential of Pakistani female entrepreneurs