Bodour Al Qasimi: We aim to rewrite the rules of the publishing game; foster equality between genders making the industry balanced & fair. 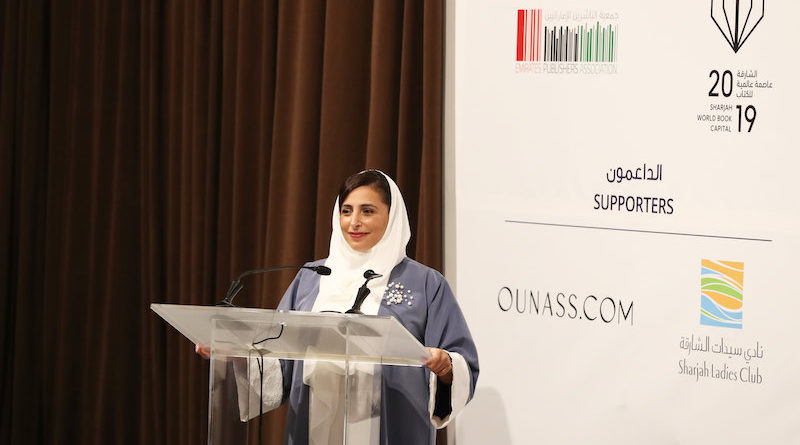 November 11th, 2019, Sharjah (UAE): Sheikha Bodour bint Sultan Al Qasimi, Vice President of International Publishers Association (IPA), and founder of PublisHer, has said that women stand on the brink of welcoming a new era for the publishing industry worldwide. She called on female publishers and authors at the PublisHer summit to come together in support of women working in the industry, and empower them with the opportunities they need to make their contributions to advancing the sector amid the changing landscape of the industry, globally.

These statements came during her keynote address at the first edition of PublisHer summit, which coincided with the yearlong celebration of Sharjah World Book Capital 2019, and was held on the sidelines of the 38th edition of Sharjah International Book Fair. The summit convened an elite group of Arab and international female intellectuals, writers and publishers to highlight several issues related to boosting women’s role in publishing and other cultural sectors.

Sheikha Bodour remarked: “It is not enough for just some women to hold leadership positions in the world’s largest publishing houses. What we are aiming for is to rewrite the rules of the game; provide the needed support to create an environment, which fosters equality, so the industry becomes balanced and fair. These changes are indeed for the better and will guarantee the industry’s continued success.

Sheikha Bodour stressed that the objectives of the PublisHer summit is to offer publishing professionals a platform developed ‘by women for women’. Here, they will freely express their views about the realities of the sector in their respective countries, exchange knowledge and talk about the challenges they face.

Olympic fencer, Ibtihaj Muhammad, who has been charting her own path as the first Muslim woman to represent the US at the Olympics, and won the 2016 Rio Olympic was in attendance. The role model said: “The voices of women often don’t get the chance to make a difference. Through the platform offered by this summit to female publishers and women around the world, we are hopeful of a promising future for us in cultural, social and economic sectors.”

“As an athlete, I made sure to convey the right picture of Hijab-wearing women in my community. I helped break the existing stereotypes about Muslim women. This summit, which I am grateful to be part of, has highlighted so many positive things, which is enabling us to share our experience and influencing the shaping of an environment where women will thrive. Time is ripe for change”, she added. 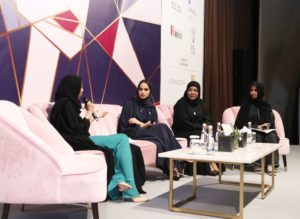 The first panel session of the summit was titled ‘Emirati Women in Publishing’. Moderated by Iman Ben Chaibah, founder of Sail Publishing, the panel’s speakers, Dr Alyazia Khalifa, Founder of Al Falak for Translation and Publishing, and authors Salha Obaid Gabesh Owner of Sadiqat Publishing and Dubai Abulhoul, shined light on how local women have been transforming and advancing the UAE’s publishing industry.

Saying the issue of diversity is complex, whether in jobs or the cultural arena for women, Alyazia opined, “We face different challenges than men. In my experience, men focus on sellable content, while women are passionate about creative and educational content. It’s time women step up and prove their worth through their merit and professionalism.”

Gabesh added: “We often receive harsh feedback on our content. The animosity does not help, because we all learn from each other.”

The second session, ‘Women in literature: Authors and publishers in the Arab world’ brought together Arab authors Ahlam Mosteghanemi from Algeria; Iraq’s Inaam Kachachi; Sudanese Leila Aboulela; and Omaima Abdullah Al Khamis from Saudi Arabia. Moderated by Dr. Fatima Al Boudi, head of Al Ain Publishing and Distribution House, the panel discussed the issue of stereotyping women in literature and the role of translation in taking the works of Arab authors to the world.

Mosteghanemi said: “When I start writing, I don’t think about a style. Many people have said to me that if I removed the cover of my book, Memory in the Flesh, they wouldn’t know if it was written by man or a woman.”

She added: “Thanks to my agent, I won ‘The Naguib Mahfouz Medal for Literature’ which made me a star in France. But, that did not make me trade my Arab ethics and beliefs for success. Often, authors who want to succeed promote western stereotypes, but I don’t accept that. And here, the role of governments and publishers becomes instrumental to exposing an author’s unique voice to international readers.”

“The stereotypes about women has prevailed for decades”, Kachachi reflected, saying that the trend has witnessed a massive shift since women began writing about their countries, about socioeconomic and political issues.

Aboulela brought her insights saying: “Writing against stereotypes is difficult, and as a novelist, I tend to write freely without thinking about it because writing is a challenge in itself. As a novelist, I have Arab concerns that I try to convey to English readers. I wrote in English in Scotland.”

She also said that the differences in the publishing realities of the Arab and western worlds are slowly disappearing. “I was keen on reaching Arab and Sudanese readers and my books were translated into 15 languages. In the process, I have noticed many promising developments in the Arab publishing arena.”

For her part, Saudi writer Omaima Abdullah Al-Khamis, said: “Stereotyping is a characteristic of the human mind. We understand things faster and better when we create patterns. Let’s admit that women throughout history were not official authors of texts – history was written by men while women stayed on the sidelines.”

What is the future role of women in international publishing? 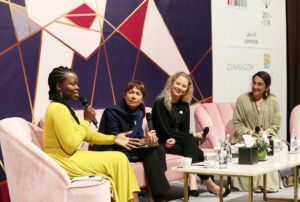 Jarlvi introduced the session saying: “I live in a society where equal opportunities are given to both women and men. I didn’t know what gender discrimination meant. In my publishing career, I have learnt a lot and I believe it is key that women in our profession look for ways to enhance cooperation and share experiences.”

Dami said: “My father was a publisher, but things were quite different 45 years ago. Life was difficult in Italy. I started my career in my father’s company, selling children’s books. In my opinion, female publishers should really focus on being competitive and skilled; have a strategic growth plan.”

Chisala started by saying that she began writing poetry when she went to study in the US. “I have achieved success and I am proud of it. In my opinion, there is no gender discrimination in modern publishing, as all national markets worldwide are growing. Also, social media has paved the way for publishing your writings.”