In 2016, Women in Law, a Lahore Education and Research Network  initiative was established. Working for equality of opportunity and connectivity of female lawyers in Pakistan, the organization strives to not just build an inclusive and accessible legal profession but also highlight and raise awareness about gender equity. The organization also works for greater representation of women in law in leadership and decision-making roles within the legal profession (Bar, Judiciary, Law Firms, Committees, Bodies/Forums etc)

On February 1st, 2020, Women in Law celebrated its fourth anniversary, sharing the 2020 agenda as well as taking stock of milestones achieved by the organization and the way forward. With renewed commitment to lifting fellow women lawyers, the organization laid emphasis on developing a women in law circle, inspired by the Lean In Circles that could actively play a role in lending emotional support and encouragement to women in the legal profession. During the event, it was discussed how the potential circle would rely on women lawyers volunteering their time to create a proactive support system. Not just focusing on law related issues, support would cover a broad spectrum of matters from discrimination, disillusionment to personal distress arising from various conflicts at the workplace and beyond. 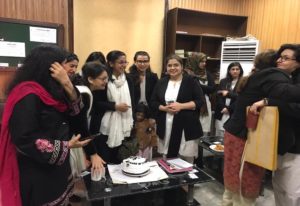 Celebrating the fourth anniversary of the organization, Founder Women in Law, Nida Usman Chaudhary said:  “What started out as a simple journey to understand the challenges and opportunities for women in law has become such a fundamental and consistent effort towards building bridges, breaking the glass ceilings and strengthening bonds so that a constructive, supportive and united platform can be developed for our collective goals and objectives as women pursuing law.”

In November 2019, the organization submitted paper to the Pakistani ministry of law and justice on transparency in appointments and nominations of senior judiciary.

Since its launch, the organization connects women in the legal profession and serves as a platform where they can seek assistance on any law related point. Sharing and celebrating one another’s work and success, Women in Law also acts as a bridge and connects members with potential clients and opportunities.

The celebratory event concluded on a high note with members unanimously agreeing on an array of empowering recommendations including a mentor-mentee program for women in law under the banner of women in law circle, more visibility and awareness of the initiative on a dedicated website, the creation of women lawyers databank as well as frequent meet-ups for networking and support, trainings especially related to violence against women, family and domestic matters to equip lawyers to better assist clients. A formal consultative meeting to operationalize the women in law circle was also discussed.