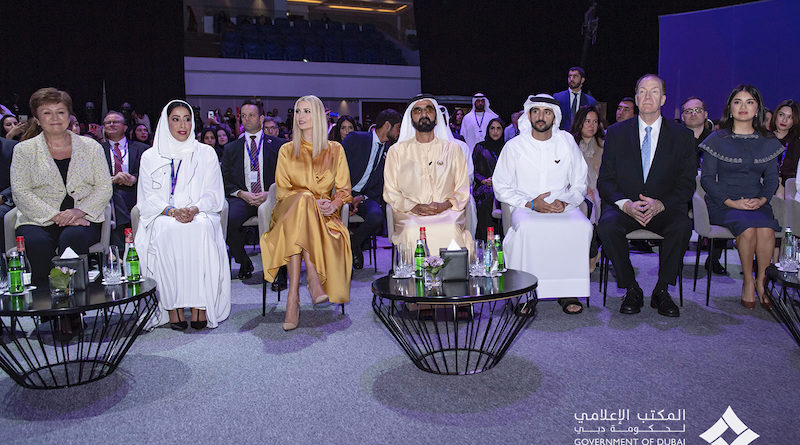 February 16th, 2020, Dubai (UAE): Vice President and Prime Minister of the UAE and Ruler of Dubai His Highness Sheikh Mohammed bin Rashid Al Maktoum, received today, in the presence of Dubai Crown Prince His Highness Sheikh Hamdan bin Mohammed bin Rashid Al Maktoum, Ivanka Trump, Advisor to the President of the United States of America, President of World Bank Group David Malpass and an accompanying delegation as well as Managing Director and Chairwoman of the International Monetary Fund (IMF) Kristalina Georgieva on the sidelines of Global Women’s Forum Dubai (GWFD) 2020, being held from 16-17 February in Dubai. 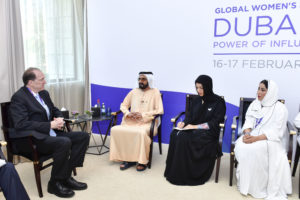 Sheikh Mohammed and the President of the World Bank Group discussed collaboration between the UAE and the World Bank to enhance the business environment globally. He said the UAE is keen to share its experience of creating a conducive environment for attracting local, regional and global investors by developing a soft and hard infrastructure that enhances ease of doing business.

His Highness Sheikh Mohammed expressed the UAE’s appreciation for the World Bank’s efforts in promoting global economic growth as well as its efforts in eliminating poverty, promoting welfare, unlocking sustainable economic growth opportunities and investing in human capital development globally. His Highness also stressed the UAE’s keenness to work closely with the World Bank to generate new opportunities in the UAE, the region and the world.

David Malpass praised the UAE’s development model and its approach in diversifying its income and reducing reliance on oil revenues, investing in strong infrastructure that supports the ambitious objectives of the country and its investment incentives that have raised the UAE’s global ranking in ease of doing business indices.

The President of the World Bank also expressed his happiness in participating in GWFD 2020, noting that organising the global event in the UAE opens the doors for identifying more opportunities for enabling women in business regionally and globally, especially with the organization of We-Fi MENA Regional Summit. 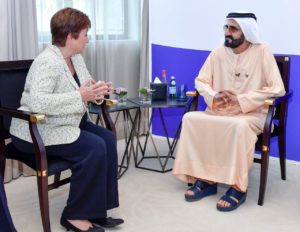 The meeting with Kristalina Georgieva focused on the UAE’s development model, which is based on building partnerships with regional and global companies backed by a supportive legislative environment that takes into account the interests of the country’s partners and provides them with a stable and secure environment, as well as a reliable infrastructure built according to the highest international standards.

The IMF Chairwoman expressed her appreciation for the UAE’s economic resilience, which was reflected in the progress and growth of domestic credit, increase of tourist numbers and high foreign trade flows at a time when the global market is facing serious challenges. She said that hosting Expo 2020 Dubai will give the UAE economy a new impetus.

Georgieva also said that Expo2020 will create a strong momentum that supports the UAE’s economic growth over the next year. Strong government economic incentives will encourage investments as well as private sector growth. She highlighted the importance of the non-oil sector growth in addition to generating new value by encouraging the growth of the SME sector, strengthening financial frameworks and raising financial sustainability both in the short and long term. 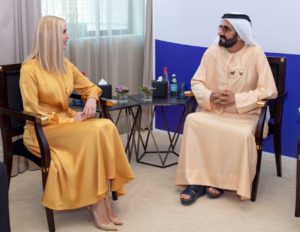 During the meeting with Ivanka Trump, HH Sheikh Mohammed hailed the strategic relationship between the UAE and the USA and the convergence of vision between the two countries under the leadership of the UAE President HH Sheikh Khalifa bin Zayed Al Nahyan, and US President Donald Trump. His Highness also highlighted the efforts of the US administration to support and empower women at all levels including governmental, economic and social. He said the alignment of US and UAE efforts in this domain opens the door for more collaboration to raise women’s contribution to the global economic development.

His Highness also praised the Women’s Global Development and Prosperity (W-GDP) Initiative, the first whole-of-government effort to advance global women’s economic empowerment, which was launched by the White House in February 2019. The W-GDP seeks to reach 50 million women in the developing world by 2025 through U.S. government activities, private-public partnerships, and a new, innovative fund. Sheikh Mohammed said the UAE is keen to share its experience in empowering and supporting women with all nations seeking to promote the role and contribution of women in building a better future.

Ivanka Trump thanked His Highness Sheikh Mohammed bin Rashid for extending her an invitation to participate in GWFD 2020, She expressed her appreciation for the UAE’s efforts in granting women equal opportunities to contribute in the comprehensive development of the UAE. She also praised the key initiatives taken by the UAE government in this domain, mainly in terms of economic empowerment, supporting women entrepreneurs and developing laws that protect women and ensure their key role in society.

Ivanka Trump also praised the UAE’s efforts in supporting Women Entrepreneurs Finance Initiative (We-Fi), as the UAE is one of the 14 founding members of the initiatives. She also said that this reflects growing awareness of the importance of involving women in the economic sector and enabling them to succeed. The UAE has become a role model for others countries in the region and the world who seek to raise women’s role to the next level, she said