The initiative aims to make GWR more relevant and accessible to people with physical, intellectual and visual impairments around the world. 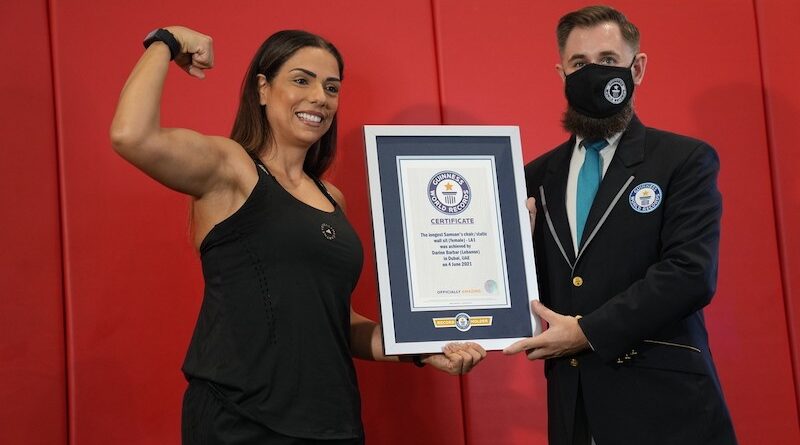 Darine has an above knee left leg amputation and lost her leg at the age of 15 to bone cancer. She had another accident in 2013 when she broke her left hip where her amputation is and had to have two screws in the hip.

The record broken today marks the launch of the Guinness World Records Impairment Records Initiative, which sees the introduction of an initial twenty-three classification categories for physical, intellectual and visual impairments. The classifications, created with the support of external experts, will be applicable across all sports, strength and ‘journey’ records.

The result is the chance to create potentially hundreds of new record titles which can be attempted by people with impairments around the world, allowing amateur athletes, fitness fanatics and keen-sports people to achieve GWR titles for records such as that revealed today, as well as titles such as ‘Most pull ups in one minute – AA1’ and ‘Fastest time to pull a fire engine 100 metres – MP3‘, and many more.

After setting the world record, Darine said: “I lost my left leg in June 1993 at the age of 15 due to bone cancer, and today, in the same month after 28 years, I am back to win the battle. My story has inspired many throughout the years, and today I make history hoping to inspire millions around the world. I thank Guinness World Records™ for considering the new classifications for people with determination, and I am proud to be part of a campaign that will change the lives of millions across the globe.”

Learn more about the classifications, the corresponding record categories and how to apply here.

Adam Brown, Director of Records at Guinness World Records, said: “It’s a privilege to launch our Impairment Records Initiative today, a project which will make GWR instantly more relevant and accessible to millions of people around the world. The project has been a number of years in the making, so to see it go live with the announcement of three fantastic new record-holders is incredibly humbling. We really hope that in launching this project and crowning new record holders, we will encourage many more people with physical, intellectual or visual impairments to get in touch and attempt a Guinness World Records title in the future.”

What’s the fastest game bird in Europe? This was the question that inspired the founding of Guinness World Records back in 1955. Starting with a single book published from a room above a gym, GWR has grown to become a global multi-media brand, with offices in London, New York, Beijing, Tokyo and Dubai. Today, we deliver world-class content, not just through books, but via TV shows, social media and live events. Our in-house consultancy works closely with brands and businesses around the world to harness the power of record-breaking and deliver award-winning campaigns and business solutions. Whatever the medium, our ultimate purpose is to make the world a more interesting, fun and positive place.