Editor The Indian Trumpet talks about her aspirations, the eZine and falling in love with all things Indian all over again. 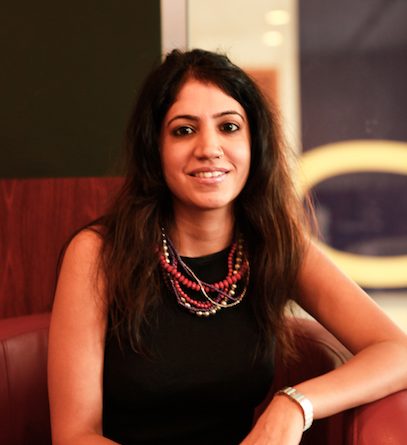 Tell us about “The Indian Trumpet” – how did it all start and why?

When I, Purva Grover, an Indian girl, landed in Dubai, I felt I couldn’t leave behind my passion for journalism and my love for home. At the same time, I couldn’t help but play with fonts, colors and words to create something for my fellow NRIs. Little did I know that hearts and minds from all communities would greet my dream with the same passion and love! I became an NRI in November 2012 and felt a strong urge to strengthen my bond with my home, India, and also a strong desire to explore my new home, Dubai. Very soon, this aspiration (first expressed via a blog) became a talking point amongst the huge Indian diaspora, not just in Dubai but all across the globe, and the magazine was born in July 2013.

The story of “The Indian Trumpet” magazine has been that of knowing Indians all over the world and falling in love with all things Indian all over again. Running the magazine has been an exciting, fascinating and challenging journey. I have lived through moments that made me smile and scream at the same time. There were times when the laptop misbehaved, fonts got mixed up, and writers and photographers missed deadlines, but then these were  complemented with times when my inbox got flooded with encouraging words, download speeds improved, and colors and words just fell into place. I even accepted that while I couldn’t do it all in one issue, each day would bring me one step closer than I was the day before to achieving my dream of doing something for Indian expats. I began to smile at the thought that, as an NRI, I was getting a chance to love, miss and appreciate “home”! And honestly, even if someone had told me that this is how tough the journey would be, I would have still done exactly the same thing, and with the same enthusiasm. “The Indian Trumpet” is for all the people I knew, got to know, and will know through this magazine.

“The Indian Trumpet” is the ONLY e-magazine for Indian expats/NRIs. Its unique content captures the color, culture and chaos of India that NRIs crave and miss, once every two months. The magazine is aimed at anyone who wants to be in touch with India and its ethos. The target audience for the magazine includes Indian expatriates globally, resident Indians and non-Indians across the globe. “The Indian Trumpet” is a celebration of India and Indian-ness.

As a woman entrepreneur, what roadblocks did you face kick-starting this venture and bringing your ideas to life?

I wish I had a gender-specific answer to this question! I guess I just did what any man would have done to make his venture grow bigger! I dream big, work hard and with passion, respond to the demands of readers, stay humble, celebrate victories, learn from failures, etc. Any new venture has its share of challenges and rewards. I don’t think I can single out any particular situation as a problem, for these are just hiccups that any start-up faces. But yes, as an individual, it has been a challenge to switch roles between an editor, founder and entrepreneur. Having said that, I am grateful for collapses and cheers and pats on our back and learnings from mistakes. We continue to strive harder and dream bigger, and to gather love and spread smiles across all latitudes and longitudes. In a journey so exciting, tiresome, rewarding and challenging, it is tough to single out problems! So, I’d rather say that there were problems that helped us grow, and they taught us that growing up would be incomplete without a few bruises.

Comment on the digital gender divide, and how, in your opinion, can it be bridged?

Is there a divide? Everyone with a smartphone, tab or a laptop works the same way. The content that drives each gender does and will continue to vary, but other than that, we are all glued to the screens. As for us, we have a wonderful online presence for both genders, and why so? Because one, we’re living in the digital world, and two, the very nature of the magazine demands a strong online presence. We are a magazine that aspires to connect to/with Indians across the world and with one another, and give them (and even non-Indians) a chance to read about and indulge in all things Indian. Needless to say, Indians back home clearly love what we are serving in our pages, and hence, our online presence helps us reach them, too. Were we not an e-zine, we would have been unable to connect with such a huge bunch of people in such a short time! Today, we are just a year and half old with a small team but have over 20, 000 followers, and this has been made possible not only because we’re an e-zine but also because we’re available free-of-cost to our readers, which is another wonderful USP of us.

What milestones have you achieved so far in terms of your venture “The Indian Trumpet”?

Quite a few, actually! Just two-issues-old, a professor and academician picked up “The Indian Trumpet” to study as a part of her course on online journalism at the London School of Journalism.

Just one-issue-old, I received a letter from an editor of NRI magazine for Indian-Americans, which has been running for more than two decades. It was full of praises for our work! It was followed by letters from several other editors of other magazines. A senior citizen reader wrote to me thanking me for keeping India alive for generations to come. At our first Breast Cancer Awareness event, we encouraged women to get them tested: it was a special moment. Our Punjab special edition (September-October 2014) was very well-received by readers in Pakistan (Punjab), too!

We are a magazine that aspires to connect to/with Indians across the world and with one another, and give them (and even non-Indians) a chance to read about and indulge in all things Indian.

What kind of response has “The Indian Trumpet” received so far?

The response has been brilliant as the milestones suggest. After the debut issue itself, our inbox was flooded with mails from ex-colleagues, ex-classmates, ex-bosses, relatives and friends. These were words of encouragement, appreciation and love. By the second issue, messages from fellow NRIs from not just in Dubai but even from Turkey, the US, Kuwait, Oman, Australia, London and more started reaching us. They demanded, we delivered and they appreciated, we strived to work harder. In just a year and half, we have managed to connect with thousands of Indians all across the globe, and we aspire to give many others a chance to indulge in all things Indian. The popularity is also visible in the fact that while the magazine has no permanent team except me, it has people (Indians and non-Indians) from all over the world contributing towards it.

How can women be empowered technologically?

Again, I wish I had a gender-specific answer to this question. Technology can be used to empower any mind: man, woman or child.

If there is one thing that sets apart ‘“The Indian Trumpet”’ from other magazines catering to NRIs, what is it and why?

There is no soft feature magazine for NRIs. “The Indian Trumpet” is uniquely Indian in terms of content yet universal in terms of “connect.” It can be an introduction to the Indian identity for some as well as a nostalgic joyride for others. The packaging and design is traditionally Indian while being contemporary, keeping our web-based identity and the savviness of our readers in mind. Being web-based, we are accessible from all corners of the world to whomever is curious about India and Indians.

Our themes have been interesting, unique like celebrating the good ol’ beverage chai, expressing our anger against the rising incidence of rape in our country, visiting the charm of the number one, spelling the tales of childhood games, paying a tribute to maa (Indian mother), etc. The contents of the magazine aim to paint a vibrant canvas covering a range of subjects – gastronomic, cinematic, literary, architectural, sartorial and musical.