Claire Dangalan chats with the eminent food scientist about her mission to show the world how food is a serious business - a matter of politics and economics. 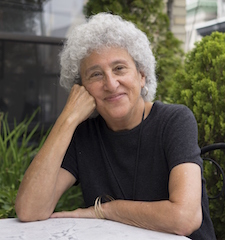 Hers is a name that resonates with anyone and everyone seriously involved in the food industry and all its trappings – Marion Nestle – whose Twitter account has been ranked by Time Magazine as among the Top 10 in health and science, and who has been ranked by New York Times bestselling non-fiction writer Michael Pollan, author of “The Omnivore’s Dilemma”, as the second most powerful foodie in America (next to Michelle Obama).

Food and nutrition enthusiasts, and those involved in the study of food science would have definitely come across any one (or all) of her books: “Food Politics,” “Safe Food,” “What to Eat,” “Feed Your Pet Right,” “Soda Politics,” “Eat, Drink, Vote,” “Pet Food Politics,” “Nutrition in Clinical Practice,” and “Why Calories Count.”

Ananke had the privilege of getting to know Marion a little better – the lady who has made it her mission to educate people on how to make the best food decisions, and to show the world how food is serious business and, like it or not, a matter of politics and economics.

In which part of America are you from? What was your childhood like?

I was born in New York City but my family moved to Los Angeles when I was twelve years old. Before that move, I was a city child. I went to school in the neighborhood, took subways everywhere, and rode my bicycle in the parks. During summers, I went to a camp in Southern Vermont that used to be a working farm. That’s where I learned about food. The people who ran the camp had lived in China for many years and learned to use woks to cook vegetables. The camp had a large vegetable garden that supplied food for our dinners. This was the first time I ate beans off the vine and understood what they were supposed to taste like. Berries grew wild on the property and we were sent out to pick them for breakfast pancakes. In the spring, the owners collected sap from maple trees and boiled it into maple syrup. Once I understood what fresh foods tasted like, nothing else would do.

What was typically served during your family meals back then? Do you have any special food-related memories? How different is the typical American dinner table now from what you grew up with?

My family didn’t fuss much about food, and I really don’t remember much about it except that my mother occasionally made apple pies that were incredibly delicious. We ate in restaurants once in a while, but except for special ones in Chinatown, I don’t remember much about them. This, of course, was long before fast food or even take-out food. I never tasted pizza until after we moved to the West Coast.

How attached/interested are you in food and everything food-related?

I consider food a full-employment act. It’s my profession as well as my pleasure. I love to eat, and the idea that you can learn about culture, society, economics, and politics through food is enormously stimulating intellectually. I am fascinated by the ways people relate to food, and even more so by the ways food companies use that kind of information to sell their products.

Did you always plan on becoming a food scientist? What were your career plans during your teenage years?

I didn’t have career plans during my teenage years. I grew up before there were opportunities for women in society, and I got married and had children while I was still quite young. But the doors were beginning to open. I was curious about science, and soon after the birth of my second child, I was able to enter a doctoral program in molecular biology. My children were five and seven years old when I finished my doctorate.

Describe the path your career has taken from your first job after university studies. Is it one that you are truly passionate about? What makes it interesting, and why does it matter?

I started my teaching career in a biology department with courses in cell and molecular biology. Nothing could be more abstract. Students were demanding courses that seemed more relevant and, a few years later, I was given a nutrition course to teach. It was like falling in love, and I’ve never looked back. It was so much easier and more fun to talk to students about what they were eating and the role that food plays in society.

What motivated you to write “Food Politics”? How has it impacted the food industry and relevant stakeholders?

I spoke at a conference in the early 1990s about the behavioral causes of cancer – cigarettes and diet. I knew that cigarettes caused cancer but I had never heard talks about the marketing of cigarettes before that meeting. Speaker after speaker showed slides (this was pre-PowerPoint) of cigarette marketing all over the world, especially to children. On one level, I knew what they were talking about but I had never paid close attention to cigarette marketing. I left that meeting thinking that we nutritionists ought to be paying the same kind of attention to Coca-Cola marketing as those speakers were paying to cigarette marketing. I started writing articles about food marketing and eventually pulled them together to create Food Politics. This was the first book to focus on the role of food industry marketing in creating conditions that predispose to obesity, and it seemed shocking at the time. Now, health advocates recognize the importance of the food environment, including marketing, in inducing people to eat more than they should of the wrong kinds of foods.

In your view, what can be considered our (humans) greatest achievement in terms of food? Why?

The ability to produce more than enough food to feed everyone on earth is an extraordinary human achievement. Unfortunately, we have not been able to solve the problem of distributing it equitably.

How do the politics and economics of food affect global food distribution and supply? What is women’s role in this?

It is widely understood that to solve problems of widespread hunger and malnutrition, the first line of defense is to educate and empower women. Much research supports doing so. The prevalence of malnutrition is enormously reduced in populations where women are educated and empowered.

In terms of the global food industry and some recent developments (e.g. organic movement, industrial farms and animal welfare advocacy, GMO identification/labeling, marketing “physically unappealing” produce, food waste, etc.), which issues do you think require the most urgent attention? Why?

It is widely understood that to solve problems of widespread hunger and malnutrition, the first line of defense is to educate and empower women. Much research supports doing so. The prevalence of malnutrition is enormously reduced in populations where women are educated and empowered.

The most urgent problems related to food and the ones that affect the largest numbers of people: hunger and malnutrition on the one hand, and obesity and its consequent non-communicable diseases on the other. These are social problems that have to do with food system failures rather than inadequacies in production.

Aside from being a James Beard Leadership Award recipient (2013), and a Paulette Goddard Professor and former Chair in Nutrition, Food Studies and Public Health at the New York University (NYU), Marion is also a Professor of Sociology in NYU, and a Visiting Professor of Nutritional Sciences at Cornell.

Marion’s curriculum vitae is more than twenty pages long, and her list of achievements is quite impressive, spanning decades of her career both in the US public and private sectors, as a professor, researcher, scientist, and author, among other things.

She had once served as a nutrition policy advisor for the US Department of Health and Human Services in the late 1980s, and has been an advisor and/or sponsor in a number health, food and scientific endeavors. Currently, Marion is a member of the Publications Board – American Public Health Association, the World Obesity Policy & Prevention – Scientific and Technical Advisory, and the University of California Berkeley – New York Metro Committee.

Wanting to emphasize how basic and essential it is for us to know the intimate details about how food becomes available from the source to our table, and how urgent food-related issues are, Marion says, “I encourage everyone to pay attention to food issues and to engage in the politics of food. Only through advocacy will we be able to solve the social problems created by dysfunctional food systems.”

Claire Dangalan is a Filipina freelance feature writer (a.k.a. Lovely Claire Cachuela) based in Dubai, and Ananke’s Features Editor. She is a consummate lover of the arts, especially literature. She taught Cultural Anthropology, Sociology, Humanities and Literature back in the Philippines. Her interests, aside from writing, include the environment, health and fitness, culinary arts, social issues, studies on world view, and “unprofessional photography.”

Stirring all inclusive progress through tech in Palestine