Event on Emirati Women’s Day discusses personal stories and the role of women innovating across all walks of national life thanks to UAE policies and role models. 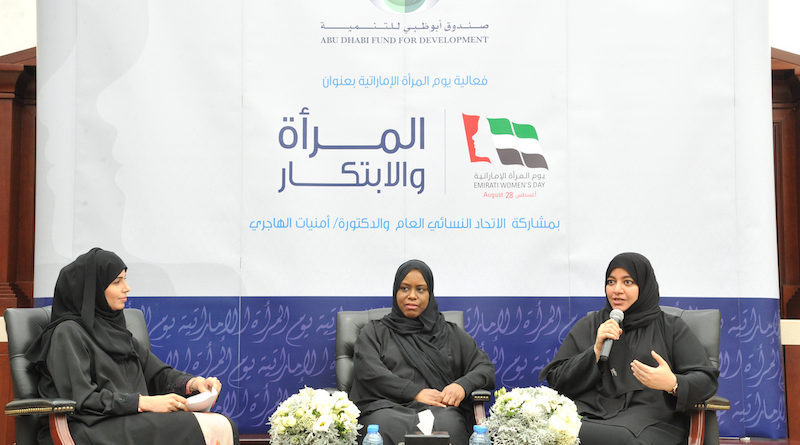 Moderated by Fatima Al Balooshi, Head of Media and Communications at Abu Dhabi Fund for Development the seminar had key note contributions from Dr. Omniyat Al-Hajri, Director of Public Health and Research at Health Authority Abu Dhabi and Ms. Ahlam Al-Lamki, Director of Research and Development at the General Women’s Union.

The seminar, featuring two senior women in the UAE national life, thanked the UAE Government and leadership for enacting policies and a framework for women in the country to play key roles in the country’s development and follow their areas of interest and specialism to make a difference. Al Balooshi, noted in her opening remarks that “we have created an environment in the UAE over the past four decades where women can follow their dreams and play their part in shaping the future direction of our country.”

Building on theme of the seminar, Al-Hajri, who leads the Health Authority Abu Dhabi’s public health service management and research efforts, opined that “due to role models across government and our leadership, including my own organisation which is headed by a woman, we are now seeing women bringing new, fresh thinking to our public and private sectors.”

“I have been involved in healthcare in the UAE since 2001 with Sheikh Khalifa Medical City and Rahba Hospital and women have been at the heart of the grown of this sector since then. I have been very fortunate to contribute my small part to the overall health of the nation.”

Accredited by the Royal College of Surgeons in Ireland at the highest level, holding the Medal of Honour in all subjects, she has also received the Medal of His Highness the President of the Executive Council for the category of Executive Director, Abu Dhabi Award Government Excellence in 2013.

Broadening the debate to all sectors, Ms. Al-Lamki focused that women must keep pushing the boundaries of what is possible. She said, “there are many Emirati female innovators and entrepreneurs and today’s young female generation follow in large footsteps. Women in the UAE are fortunate to have such strong role models and champions, especially from the Mother of Our Nation, Sheikha Fatima bint Mubarak, Chairperson of the General Women’s Union and Supreme President of the Family Development Foundation.”

“It is vital that women continue to believe that anything is possible and consider careers in a full range of sectors where there will be people and organisations to mentor and support them at every stage of the way. Today we can take a step back and recognise and admire just how much has already been achieved by our women in championing our country’s causes and ongoing development.”