Ananke’s Edith Macharia delves deep into the issue of climate change and its impact on women. 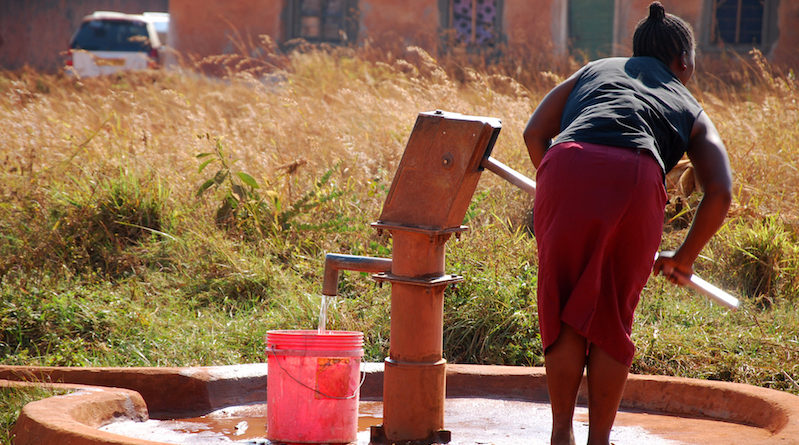 She hurries up the ridge, with her fifteen-year-old pot balanced precariously on her head. The pot was a wedding gift from her “mama”. The older women said she would need it to feed her family; they were right, as the brown pot had been her companion ever since.

It is 9am; it’s her fourth trip to the great river now quickly drying up. She likes to fetch her water before the scorching sun is up. Being a mother of three boys and a daughter, her youngest, getting enough water to meet their needs and those of her husband’s is a draining uphill task.

In her community, women are tasked with going to the river and fetching water; it’s not a chore for men! Early on, her sons accompanied her to the river, but now they have been circumcised, they are considered men and are no longer allowed do “a woman’s job”. Her daughter is too young to accompany her to the river, so she makes the five trips to the river three kilometers away alone every day. This is the same story for many other women in rural Africa.

We are of the knowledge that all people, including women, are agents of change in their homes, places of work and community. Women play a critical role as influencers of decisions made with regard to climate change. Women plan ahead, they think in time horizons that span the lives of their children and those of their grandchildren. This makes them instrumental in dealing with the menaces of climate change.

In Africa, women are responsible for 60 to 80 percent of food production, but the now-unpredictable seasons, floods and droughts make it twice as hard for them to fulfill these roles. The world is currently climate-constrained and people all around have to deal with effects of crop failures, water shortages and air pollution.

Climate change makes farming twice as hard for women, too. Scarcity in terms of food production due to flooding, drought, famine, etc., puts women who have mouths to feed under tremendous pressure to provide. To cook food, fifty percent of women around the world still burn wood, dung, coal and other traditional fuels for cooking.

According to the World Health Organization (WHO), around three billion people still rely on solid fuels for cooking and to warm their homes. This results in air pollution in unventilated homes and in the production of black carbon. This makes air pollution a major challenge in Africa where about 600,000 deaths occur due to this invisible killer.

Air pollutants include black carbon and greenhouse gases, one of which is carbon dioxide, a major component of coal and charcoal used for cooking. Charcoal produces black carbon and carbon monoxide. Black carbon refers to the sooty particles produced when burning solid fuels, and it is a terrible pollutant leading to health issues such as asthma, low birth weight, heart problems and lung cancer. This leaves women and children quite vulnerable, as they are the ones who spend most of their time indoors.

Climate change makes farming twice as hard for women, too. Scarcity in terms of food production due to flooding, drought, famine, etc., puts women who have mouths to feed under tremendous pressure to provide. To cook food, fifty percent of women around the world still burn wood, dung, coal and other traditional fuels for cooking.

Not dealing with climate change, therefore, leaves women and children vulnerable to disease. Significantly reducing the use of charcoal and firewood as fuel will help reduce air pollution and avert the health consequences that come with carbon pollution.

There needs to be a massive policy change as we focus on achieving agenda 2030 so that the world works on reducing the number of people (women) relying on solid fuels to carry out their daily chores. The use of polluting fuels is a major obstacle in sustainable development.

Women (and children) who spend a lot of time gathering firewood can use the time to carry out other income-generating activities that would be a boost to economic growth. Children can then spend a considerable amount of time at school for learning rather than working. Thus, the alleviation of climate change complements the achievement of the sustainable development goal on education.

Women are also vulnerable out in the fields while collecting firewood as they may be exposed to violence, kidnapping and, in some extreme cases, even to rape. Dealing with the fuel problem will not only prevent climate deterioration but can also impact the incidence of atrocities committed against women.

During the COP21 2015 Paris conference, only 40 percent of the 160 participants in the COP21 made gender references in their Intended National Determined Contributions (INDCs), and most of them did not include the developed countries who are the major global decision-makers. This tells us that even though gender equity is part of our sustainable development goals, the world’s nations are not taking it to heart, and women are still not included in decision-making.

Women have continued to remain the minority in climate negotiations both at national and international levels. At the global scientific body on climate change, and the intergovernmental panel on Climate Change (IPCC), the percentage of women represented in these establishments remains minor, and this is something that needs to change. This need was highlighted as early as during the COP7 in Marrakech in 2001, but is yet to be implemented. In Marrakech, the delegation realized that gender balance has an influence on decision-making, and the level of intelligence in a group increased with the number of women in a group; therefore, for the world to stop climate, change women must be included in policy-making.

The spiraling effects of climate change must come to a halt, and this can only be accomplished if we recognize the fact that women are the ones at the center of the changing climate, deforestation, pollution and the loss of biodiversity which, in turn, affect their quality of life and threaten the survival of their families, us, their families.

It is then, imperative that women be included in deciding on what needs to be done to curb climate change. After all, it is women who need to walk kilometer upon kilometer to fetch water for their families… shouldn’t they, then, be given a seat at the head of the table to make decisions and help make everyone’s quality of life, better?