300 International Officials and Experts on Women Rights Participate in the Event. 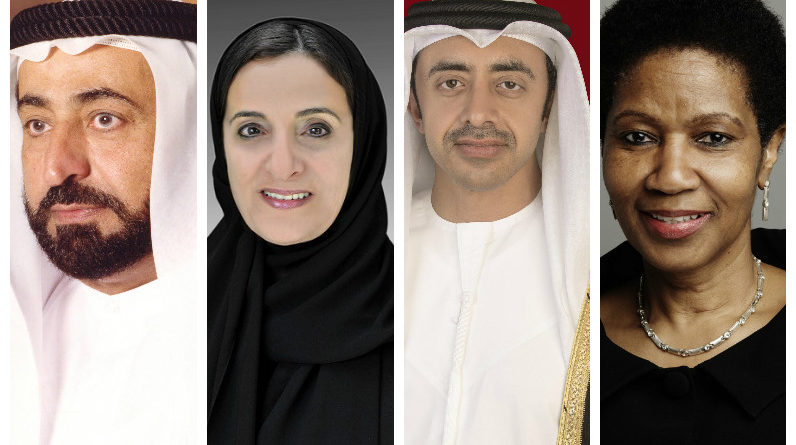 Sharjah (UAE), October 17, 2016: In the presence and under the patronage of His Highness Sheikh Dr. Sultan bin Muhammad Al Qasimi, Supreme Council Member and Ruler of Sharjah, and his wife, Her Highness Sheikha Jawaher bint Mohammed al Qasimi, Chairperson of the ‘Big heart’ Foundation, Chairperson of NAMA Women Advancement Establishment, the second edition of the ‘Investing in the Future’ international conference is to be launched tomorrow (Wednesday) at Al Jawaher Reception and Convention Centre in Sharjah.

Held under the theme ‘Building the Resilience of Women and Girls in the Arab Region’, the conference is organised by The Big Heart Foundation (TBHF), a Sharjah-based international humanitarian body, and the United Nations Entity for Gender Equality and the Empowerment of Women (UN Women).

His Highness the Ruler of Sharjah will open the conference with a key opening address, while Her Highness Sheikha Jawaher bint Mohammed Al Qasimi will witness an all-women closed session. The session, ‘Future of Women in the Emirate’ is organised by NAMA Women Advancement Establishment in collaboration with the General Women’s Union and will discuss the journey of Emirati women and their achievements over the past four decades.

A dedicated combination of activists and gender equality advocates, representatives from government and non-government organisations, decision-makers, academics, experts and journalists from the Arab region will all be participating.

His Highness Sheikh Abdullah bin Zayed Al Nahyan delivers an opening keynote address at the opening ceremony of the second edition of the Investing in the Future Conference. The participation of His Highness reflects the importance of supporting and empowering women and the commitment to provide women with the tools they need to participate actively in public life, in particular the diplomatic corps. Their positions in the Ministry of Foreign Affairs and International Cooperation and at UAE embassies and consulates abroad is in perfect alignment with the leadership’s vision to support Emirati women in all areas.

Mrs. Rula Ghani, the First Lady of Afghanistan delivers a keynote address at the opening ceremony of the conference.

Mrs. Ghani, wife of the President of Afghanistan, Mr. Ashraf Ghani, has brought a real change for the women of Afghanistan. She was assigned an office at the presidential palace, where she plays an unusual role, challenging the Afghani traditions that forced former First Ladies to keep a low profile.

H.E. Sheikha Lubna Al Qasimi, Minister of State for Tolerance, delivers a keynote address at the closing ceremony of the conference.

Her participation at the conference stems from the crucial role she plays in the public sector in the UAE, becoming the first Emirati woman in UAE history to assume a cabinet position, when she was appointed as Minister of Foreign Trade in 2004. Following a further two ministerial appointments, she was invited to become Minister of State for Tolerance in the UAE, a role created earlier this year. She was featured in Forbes Magazine as 42nd on their list of the ‘World’s 100 Most Powerful Women for 2015’ and was also included in the Wall Street Journal’s ‘The 50 Most Important International Women to Watch.’ In addition, Sheikha Lubna was the first Emirati to receive The Clinton Global Citizen Award from the Clinton Global Initiative.

Kailash Satyarthi is a Nobel Peace Laureate and renowned children’s rights activist who has been at the forefront of the global movement to end child slavery and exploitative child labour for three decades. The grassroots movement founded by him in 1980, Bachpan Bachao Andolan (Save Childhood Movement), has liberated more than 85,000 children from exploitation and developed a successful model for their education and rehabilitation.

Malala Yousafzai is a Pakistani activist for female education and at 17, the youngest-ever Nobel Prize laureate. She is known mainly for human rights advocacy for women’s education in her native Swat Valley in the Khyber Pakhtunkhwa province of northwest Pakistan, where the local Taliban banned girls from attending schools.

Phumzile Mlambo-Ngcuka, Executive Director of UN Women, is known for devoting her career to human rights, equality and social justice issues. She has worked in government, civil society and with the private sector, and in her role as Deputy President of South Africa from 2005 to 2008, she was actively involved in the struggle to end apartheid. She has been instrumental in overseeing programmes to combat poverty and bring the advantages of a growing economy to the poor, with a particular focus on women.

Priti Patel, Secretary of State for International Development in the UK

Priti Patel is Secretary of State for International Development in the UK. She was born in London from a Ugandan-Indian migrant family and was initially involved with the Referendum Party before switching allegiance to the Conservatives. She was elected Conservative MP for the seat of Witham at the 2010 general election. She will participate in a plenary debate on the second day of the conference under the title ‘Women as Peace Builders’.

H.E. Ameera BinKaram delivers a keynote address on the second day of the conference.

She is leading the way for the economic, social and professional empowerment of Arab women and among her many distinguished roles, she is also a member of Olave Baden-Powell Society that supports the mission of World Association of Girl Guides and Girl Scouts and heads the Women’s Chapter for the CEOs Club, the world’s oldest and largest international non-profit business association for CEOs.

Other than being an environment and animal activist, she has many accolades to her name – BinKaram is the recipient of the Humanitarian of the Year award and the International Alliance for Women, World of Difference award. She recently became the first Arab woman to graduate from Bucerius Summer School Program, and is a graduate of the International Visitor Leadership Program.

Dr. Veronica Magar delivers a keynote address on the second day of the conference.

Veronica Magar (DrPh) currently leads the Gender, Equity and Human Rights Team at the World Health Organization (WHO), with the mandate to mainstream WHO’s priority cross-cutting themes across all policies and programs.

Since 2006, she has worked with UN agencies, NGOs, and governments in more than 30 countries across Asia, Africa, and the Middle East to address gender inequality and human rights. Prior to that, Dr Magar worked at international NGOs including CARE where she led work on gender mainstreaming, violence against women, research and evaluation in the area of women’s health. She has been published in the areas of gender, HIV/AIDS, social change and women’s health.

Enas Makkawi, Manager of the Directorate of Women, Family and Childhood at the Arab League

Address at the closing session

Enas Makkawi will deliver the address on behalf of the Secretary-General of the Arab League.

Enas Makkawi is known for her dedication and commitment to standing for women’s right in the Arab World in general and particularly in Egypt. She initiated many actions and launched many initiatives, most notably the ‘Baheya Ya Masr’ movement in 2012, which is aimed at restoring key roles of Egyptian women.

The conference features two main panels and four discussion roundtables on each day.

The second panel is titled ‘Food for Thought: Investing in Women – Gender Responsive Policies and Budging’

Roundtables of day one:

The first day of the conference features four roundtable discussions. The first is titled ‘Addressing Violent Extremism’, with the participation of:

The second roundtable discussion is held under the title ‘Trafficking and Slave Labour (Including in Conflict)’, featuring:

The third roundtable discussion is held under the theme ‘Innovate – Creating Space for Entrepreneurship’, with the following participants:

The fourth and final roundtable discussion of Day One is themed ‘Women’s Human Rights in Islam’, and features:

The first panel of the second day is themed ‘Women as Peace Builders’, with the participation of:

The second panel is titled ‘Strategic Partnership for Economic Development’ with:

The first roundtable discussion takes place under the title ‘Role of Youth in Resilience’ and sees the participation of:

The second roundtable is ‘The Girl Child and Education’, with the participation of:

The third roundtable discussion takes place under the title ‘Engaging Men and Boys as Agents of Change’, and features:

The fourth and final roundtable discussion is held under the title ‘Launch of the Essential Services Package for Women and Girls Subject to Violence. UN Women and UNFPA’, with the participation of:

Investing in the Future seeks to highlight the importance of women’s inclusion in the economic development process. It focuses on providing them with support and meeting their needs in education, training, employment and access to resources – especially for female-headed families in light of the social and economic restrictions imposed on women in many countries across the world.

The conference also aims to recognise women as agents of change in peace and recovery processes. There is a need for a gender responsive development approach in addition to the need to adopt a coordinated effort in peacebuilding planning. Partnerships must be forged across all sectors, with gender equality as an integral part of all strategies, policies and programmes aimed at empowering, protecting and supporting women and girls, including refugees and IDPs.

The fascinating world of Caroline Kennedy