The second day of IIFMENA unveils with the important themes of women’s healthcare and their role as peacemakers. 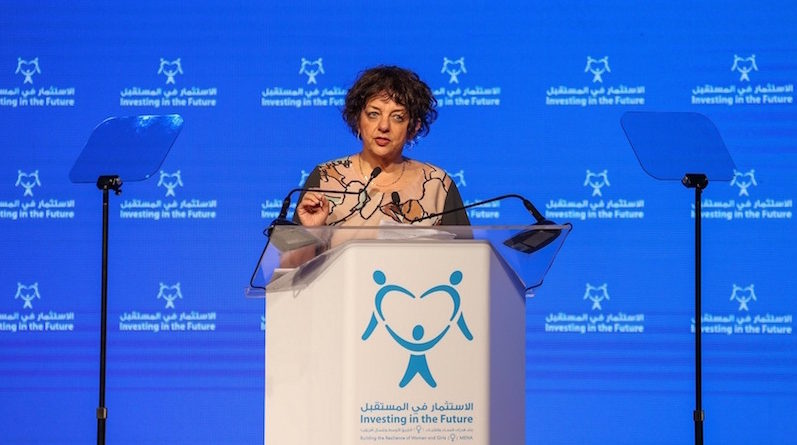 Sharjah, UAE, October 20th 2016: The fact that women are unfairly trapped in the devastation and ugliness of war and are tired of it, especially in light of the current situation in the Arab regions, have echoed throughout the meetings and discussions of the proceedings of the second edition of ‘Investing in the Future’ (IIFMENA) conference.

The main focus of the Plenary Opening Session, headed by Dr Veronica Magar, WHO Team Leader for Gender, Equity and Human Rights, was women’s health. Dr Magar said that the World Health Organisation (WHO) calls for empowering women and building resilience through excellent healthcare and support services.

Highlighting women’s health as a human right and part of the 2030 UN Sustainable Development Goals, she stressed on the need of segregation based on gender, age, ethnicity, religion, culture, social status and other such important factors in drawing up accurate statistics that will aid targeted and comprehensive delivery of healthcare services for women.

Focusing on the urgent need to support female caregivers, she said, “It is artificial to separate women’s health from the numerous female caregivers all around the world who dedicate their lives to providing healthcare to others. The WHO is especially highlighting the case of migrant caregivers, who need a robust support system to ensure their growth and security. Our soon to be published report titled ‘Women on the Move’ will provide a detailed analysis of the same.”

Pointing out non-communicable diseases (NCDs) as one of the biggest factors that negatively affects women’s health in the Arab region, Dr Magar shared that around 60% women here suffer NCDs generating from excessive tobacco use, and aliments like obesity, cancer and diabetes emerging unhealthy eating patterns and negligible physical activity. Calling for concerted government’s efforts in dispelling the myths that surround nutrition, healthy eating, and the dangerous images of a woman’s ideal physicality, she concluded by saying, “women’s healthcare and their empowerment through dismissing existing stereotypes is a battle worth fighting for.”

The opening session was followed by a Plenary Debate titled, ‘Women as Peacebuilders’. Chaired by Sharmeen Obaid Chinoy, Journalist, Filmmaker and Activist; Hibaaq Osman, Karama Founder; Sanam Naraghi-Anderlini, ICAN Co-Founder and Executive Director; Asma Kftarou, Syrian Women´s Advisory Board Member; the debate began with moderator Alison Davidian, a UN Women Policy Specialist’s comments on how the mechanisms of peace are not equipped to handle the unrest of our times, and introducing how gender-specific legislations and policies are our only chance at sustainable peace.

Pakistan’s first Oscar winner and named The World’s 100 Most Influential People by TIME, Chinoy highlighted the importance of ‘film’ as a powerful tool for empowerment as it transcends the barriers of illiteracy and gathers mass opinion on issues of social importance.

Showing a clipping from her Oscar-winning film, A Girl in The River: The Price of Forgiveness, she narrated how Saba Qaiser, an 18-year-old girl in Pakistan survived an honour killing because she dared to speak up.

“I am a storyteller who amplifies the voices of women, literate or not – voices that churn positive change in society and have the power to positively influence the legislative processes of an entire nation. People in our country can no longer get away with honour killings because these unwavering voices finally drowned the injustice that surrounded this issue.”

Through a compelling example of how women have come out to the streets in war-afflicted nations having lost their husbands and children to it, Hibaaq Osman drove the point about women’s resilience and their commitment to peacemaking and building home. Highlighting women’s intricate understanding of society’s workings, and their knowledge of what needs to be done for its continued progress, she called for their greater involvement in public offices.

“Women are the core of society. The walls of fear that barred women from coming out and participating in the world’s affairs have been broken down already. All they need now are the tools that will really make a difference. They are needed because they want clean water, peaceful neighbourhoods, schools for their children. This is why they want to hold public offices; not because they aspire for power or authority through these positions,” she said.

“My only recommendation will be to invest less in militarisation and wars, and instead create a strong foundation for peace through investing in women, their education and empowerment,” she added.

Providing a ray of hope for the glim Syrian situation, Asma Kftarou, asserted that even though Syria is a broken nation today, she is its daughter and has peace within her. She promised that through her committed efforts, she will make sure that women in the nation are duly invested in, who will in turn bring lasting peace and prosperity to their land.

She said, “Humans have become tools of destruction and women are most affected by this. They find themselves unfairly trapped in the devastation, losing their homes, their families and ultimately their dignity when they become victims of rape or have to leave their countries.”

She concluded by emphasising on the role women should really be playing if they were to go by what is prescribed by the unadulterated and true version of Islam. She cited the example of Khadijah, the first wife of Prophet Muhammad, who was an esteemed and successful entrepreneur who ran a business larger than all of the Quraysh trades combined, at a time when society was largely male-dominated.

The second edition of Investing in the Future is organised by The Big Heart Foundation, a Sharjah-based humanitarian organisation dedicated to helping people in need worldwide, and the United Nations Entity for Gender Equality and the Empowerment of Women (UN Women). This year’s theme is ‘Building the Resilience of Women and Girls in the Arab Region.’ It is a two-day event taking place on 19 and 20 October at the Al Jawaher Reception and Convention Centre in Sharjah, UAE.