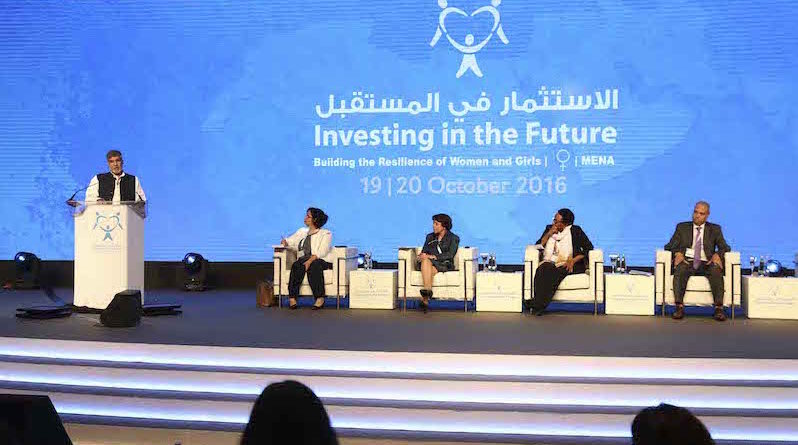 Sharjah, UAE, October 20th, 2016: The challenges and opportunities facing women in the region were the topics discussed at a quartet of concurrent roundtables that took up the closing sessions of the second ‘Investing in the Future’ IIFMENA conference, which opened on Wednesday at the Al Jawaher Reception and Convention Centre in Sharjah.

Organised by The Big Heart Foundation – a Sharjah-based international humanitarian body dedicated to aiding vulnerable people worldwide- Investing in the Future was conducted in collaboration with the United Nations Entity for Gender Equality and the Empowerment of Women (UN Women).

Among the challenges addressed during the roundtables were the need to confront violent extremism along with trafficking and slave labour. A more positive note was sounded with an outlining of the opportunities presented by innovation that creates space for entrepreneurship, while a fourth session reiterated women’s rights under Islam.

“What we see is that there are two approaches to social change. The first approach involves identifying who is your friend and who is your foe and then working with your friend to destroy your foe. The second more positive approach is to identify who is affected by an issue you care about and then working to ensure that everyone has the result they want. This is far preferable to the first win/lose approach, as these tend to result in a lose-lose outcome,” said Shamil Idriss.

Highlighting what the UNFPA was doing to safeguard women at threat from trafficking and its concomitant issue of sexual and gender-based violence, Enshrah Ahmed said: “We have established safe space centres for women where they can access social workers and medical doctors, as well as receive entertainment services. They are able to bring their children to these facilities. We have 20 of these centres in Syria alone,” she said.

Organised by The Big Heart Foundation – a Sharjah-based international humanitarian body dedicated to aiding vulnerable people worldwide- Investing in the Future was conducted in collaboration with the United Nations Entity for Gender Equality and the Empowerment of Women (UN Women).

“The UAE has risen seven places in global innovation rankings since 2014 and this can be attributed to all the initiatives and campaigns that were introduced as a result of the UAE declaring 2015 as being the ‘Year of Innovation.’ One of the sectors in the National Innovation Strategy is space. It is important to note that the UAE’s national space programme is being headed by a 29-year-old Emirati woman,” said Shatha Al Hashimi.

Addressing the specific issue of women’s obedience to men in Islam, Dr. Marwa Sharafeldin said: “According to classical Islamic jurists, ‘the man maintains, the woman obeys.’ But this is a man-made equation, not a divine one. The concept of male guardianship is one that has been developed over the last 1,400 years, with subsequent jurists adding their own interpretations. Today this is no longer working, not only because it is leading to abuse against women but also because it is not possible for men to provide for all the women in his family in today’s economic climate. This old form of guardianship is as unfair on the man as it is the woman,” she said.

Investing in the Future was held under the patronage of His Highness Sheikh Dr. Sultan Bin Muhammad Al Qasimi, Member of the Supreme Council and Ruler of Sharjah and his wife, Her Highness Sheikha Jawaher Bint Mohammed Al Qasimi, Chairperson of The Big Heart Foundation and Chairperson of the NAMA Women Advancement Establishment. The two-day forum, which concluded on Thursday, brought together government officials, representatives of international and non-governmental organisations, advocates of gender equality, academics and a number of experts and media personalities from across the world.