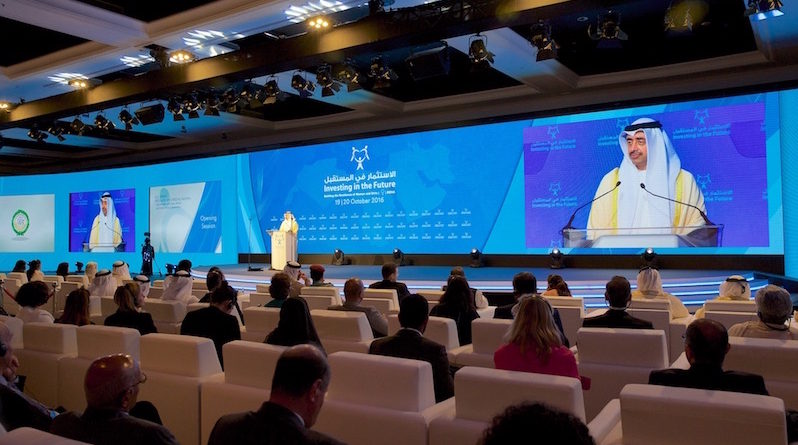 Sharjah, UAE, Oct 20th, 2016: Women are the drivers of the nation’s economy – that was the message given by His Highness Sheikh Dr. Sultan bin Mohammed Al Qasimi, Supreme Council Member and Ruler of Sharjah, at the opening of the second edition of the ‘Investing in the Future’ (IIFMENA) conference, which took place today (Wednesday) at the Al Jawaher Reception and Convention Centre in Sharjah.

Starting the proceedings at the event, which has been organised by Sharjah-based humanitarian group The Big Heart Foundation in conjunction with United Nations Entity for Gender Equality and the Empowerment of Women (UN Women), His Highness reminded the audience of the UAE women’s disproportionate representation in the workplace.

His Highness delivered the address in front of a packed audience, which included his wife, Her Highness Sheikha Jawaher bint Mohammed Al Qasimi, Chairperson of The Big Heart Foundation and Chairperson of NAMA Women Advancement Establishment, His Highness reiterated how women form the larger percentage of the country’s workforce with a greater presence than that of their male counterparts, particularly at the federal level.

“I would like to draw your attention to facts that make us proud in the UAE. Women represent 49 per cent of the United Arab Emirates’ population yet dominate our national job market with a 66 per cent presence – this is something we take immense pride in. This trend continues in our public offices, where women fill up two-thirds of the seats at both at federal and local levels,” said His Highness during his address.

His Highness continued by saying that despite the achievements of women in the workplace and the economic impact of so many female entrepreneurs starting successful investments in the UAE, there was still room for improving opportunities for women in all spheres and helping them to contribute even more to the development of the nation.

“Emirati Women’s investments exceed AED12 billion at present. Despite this fact, I believe that economic empowerment of Arab women needs to be given serious attention and greater efforts,” His Highness said.

“There are organisations in the Arab world, such as family development centres, businesswomen’s organisations, adult education centres and other women’s societies, which play an important role in bridging the gap between women in the Arab world and developmental opportunities, preparing them to play more important roles in ensuring equal rights, which are guaranteed by all religions and state constitutions,” His Highness continued.

As part of the opening of the two-day IIFMENA conference, the audience watched a video containing a call to action to the world from Sheikha Jawaher bint Mohammed Al Qasimi, which highlighted the importance of investing in the future of women.

“There are women in many parts of the world who continue to live in societies and under laws that do not recognise their importance nor support them. We call on all men and women to be with her. To support her, appreciate her and invest in her capabilities. Women are the source of life and the inspiration for the future. Let us stand by our women, not just for her, but for society, for future development and for peace,” said Her Highness Sheikha Jawaher during the presentation.

For His Highness keynote address, Sheikh Abdullah bin Zayed Al Nahyan highlighted how women’s role in the building of the region had historically been overlooked and said that it was the responsibility of every UAE official to stress the importance of inclusiveness in every aspect of life. HE also included an anecdote from his family that showed the importance that the UAE rulers attach to women.

“Women are the source of life but their important role in the early days was never really mentioned – it’s as if men did all the building of the nation. I learned from early on how important it was to include the opinions of women in decision-making. I remember my father Sheikh Zayed was always asking my mother Sheikha Fatima about what she thought on various issues – that had a big impression on me. I believe that women in the UAE can be role models for Arab women everywhere. Let’s not forget that tolerance and happiness in the UAE are each under the remit of a woman, as it is women who head these UAE ministries,” His Highness Sheikh Abdulla bin Zayed said.

Addressing the issue of conflict having terrible repercussions for women and children, HE Rula Ghani said; “There is no doubt that war robs people of their humanity. War is inhuman and women and children seem to suffer from it the most. In the year 2000, this fact prompted the UN Security Council to adopt Resolution 1325, which recognises the disempowering effect that war has on women. The resolution calls on all UN member states to set measures that would prevent violence against women, enhance their voice through their political participation in decision-making positions and attend to their needs when they are stranded in refugee camps.”

Commenting on the UN’s involvement with the forum, Phumzile Mlambo-Ngcuka, UN Under-Secretary-General and Executive Director, UN Women, said; “This conference comes as we find ourselves at a significant crossroads. Resilience is defined as the capacity to recover quickly from difficulties. Such resilience is particularly necessary during and after conflicts, especially in this region, which is currently host to three out of four of the world’s worst humanitarian emergencies in Iraq, Syria and Yemen. In order to build the resilience of women and girls, we must strengthen their capacities so that they are fully empowered to support long-term peace and security.”

“We cannot talk about investing in the future of this region without calling for an end to the bombings and wars that surround us. We need strong unity among Muslim peoples and countries. Islam’s foremost message is one of sisterhood, brotherhood and humanity and it is time that we join hands in this struggle. Together, we must make a commitment to this generation – to empower them with the education they need to bring peace and prosperity to their countries.” – Malala

Citing education and connectivity as big enablers of women’s empowerment, Nobel Peace Prize winner and child rights activist, Kailash Satyarthi, said; “Today, women are rising, but this is happening only where they have access to education. Young girls in the MENA region are demanding their rights. They are demanding access to quality education and freedom. Forty-eight per cent of women in the Arab world do not own a mobile phone and the gender gap in internet usage across the region is 34 per cent. Let us not leave them behind. Connectivity is a great equaliser, and the need to strengthen interactions between MENA’s youth and the rest of the world is higher today than ever before. The world needs to step up for its children, bringing them out of conflict zones and child labour and instead putting them into schools.”

Drawing attention to the current situation of conflict in the Arab world, Malala Yousafzai, the youngest Nobel laureate in the world, said, “We cannot talk about investing in the future of this region without calling for an end to the bombings and wars that surround us. We need strong unity among Muslim peoples and countries. Islam’s foremost message is one of sisterhood, brotherhood and humanity and it is time that we join hands in this struggle. Together, we must make a commitment to this generation – to empower them with the education they need to bring peace and prosperity to their countries.”

The second “Investing in the Future” Conference, which closes on October 20th, 2016 is being held under the patronage of His Highness Dr. Sheikh Sultan bin Mohammed Al Qasimi and his wife, HH Sheikha Jawaher bint Mohammed Al Qasimi. The UN conference aims to highlight the need to incorporate women and young girls into decision-making and planning for economic empowerment; paying attention to their specific needs in education, skills training and employment. Participants at the global forum are discussing effective means to ensure their access to resources, particularly for female-headed households in view of the socio-economic restrictions placed on women in many countries.

The fascinating world of Caroline Kennedy