Announcement made at World Economic Forum on the Middle East and North Africa in Jordan. 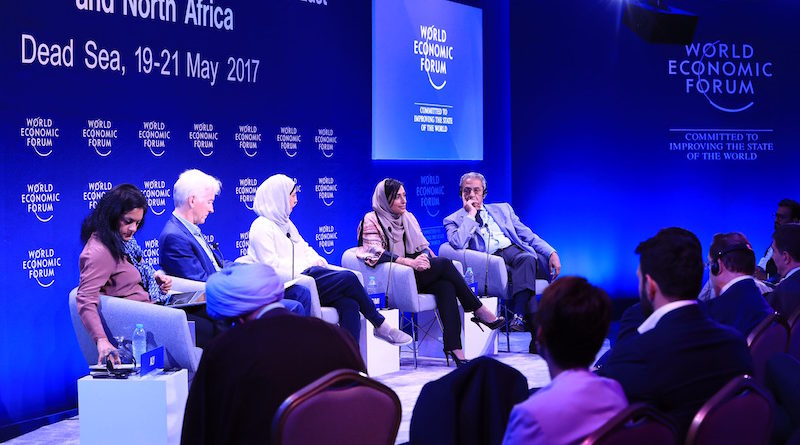 Sheikha Bodour’s appointment was announced by Professor Klaus Schwab, Founder and Executive Chairman of WEF, in the presence of a number of government officials and senior business leaders at the World Economic Forum on the Middle East and North Africa, which took place May 19-21 at the Dead Sea in Jordan.

Comprising influential business leaders from across the Arab World, the RBC enhances cooperation between the public and private sectors to address the region’s most significant challenges. Alongside representatives from industry leaders, which have long supported WEF, Sheikha Bodour will lead the council in pioneering transformative solutions to the region’s big societal challenges.

The appointment of Sheikha Bodour, who is the first woman to Chair the RBC, comes in recognition of her pioneering efforts in addressing key regional socio-economic challenges around competitiveness, youth employment, entrepreneurship, enhancing governance and ensuring institutional quality for inclusive growth, education reform and peace-building.

Under Sheikha Bodour’s leadership, the RBC will serve as a collaborative platform for addressing the complex economic, social and humanitarian challenges that the region faces. It will work to develop a strategic framework for deepening partnerships between the public and private sectors around economic integration and diversification, spurring innovation, economic growth, workforce skills development, entrepreneurship and increased female labour force participation.

Following the announcement of her appointment, Sheikha Bodour participated in a number of discussion panels taking place at the World Economic Forum on the Middle East and North Africa. In the session ‘Stewarding a Policy Framework for Generational Transformation,’ she underlined the need to extend bridges of communication between the council and the Regional Strategy Group (RGS), of which she is a member. Exploring areas where policy reform is required, she called for greater discussions on issues such as economic integration and diversification, job creation, education and training, healthcare and social development, in order to be able to agree on a regional agenda and the future role and mandate of the RGS.

Highlighting the region’s major challenges and opportunities, Sheikha Bodour said: “The Middle East is on the threshold of a new phase of growth. While a world of opportunities lies ahead, it is more important than ever for us to tread carefully and to place a strong focus on building integrated, inclusive and sustainable economies that are beneficial to all parties.”

In the session ‘New Concepts: Arab World from History to Fiction,’ Sheikha Bodour discussed questions of regional identity, diversity and a shared future from the perspective of literature, highlighting the key literary concepts needed in the Arab world to achieve a more inclusive future for the region. She noted that literature and fiction play a prominent role in widening people’s imaginations and broadening their horizons, thereby helping them adopt sound scientific thinking that provides them with the critical reasoning skills needed to overcome the most difficult challenges they face. 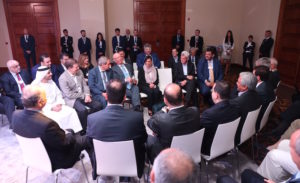 “I believe in the role of books and the power of the word in changing people’s lives, especially those living in countries affected by crises and wars. This is what has prompted me to establish Kalimat Foundation for Children’s Empowerment, with its key mission being to ensure children’s access to reading by providing refugee libraries with children’s books. In these countries, there are many children who are living in especially difficult circumstances that deprive them of their right to education, thereby denying their right to imagine and dream of a better future. This is why the role of stories and novels is extremely important in providing children with the tool that enables them to realise their hopes and dreams,” said Sheikha Bodour.

Stressing the need for Arab authors to write about their history and for them to have a platform that would allow them to become a powerful voice for their community, Sheikha Bodour said: “I truly believe in the book’s ability to be a window for communities to achieve cultural exchange and a mirror that reflects what is happening in Arab societies.”

A delegation of government officials and economic experts from Sharjah was also present at the World Economic Forum on the Middle East and North Africa, with its members meeting with leading business, government and civil society leaders from over 50 nations to advance public-private cooperation on issues deemed critical for the future of the MENA region.

The World Economic Forum on the Middle East and North Africa 2017 was held in partnership with the King Abdullah II Fund for Development. The meeting took place in the context of growing economic reform efforts that are being made in many countries in the region, as well as changing investment and trade priorities. Through several discussions and roundtables, the platform addressed the continued geopolitical shifts and humanitarian challenges by supporting multi-stakeholder dialogue on the situation in Syria, Iraq and Libya and the ongoing refugee crisis.

The forum also explored the impact of the ‘Fourth Industrial Revolution’ – a new era in the global economy promising huge opportunities resulting from the convergence of digital information and technological advancements in various economic fields. Under this theme, participants examined how new technologies can be harnessed to create employment, encourage entrepreneurism and drive inclusive growth, especially in the MENA region that is an area defined by its youthful population.