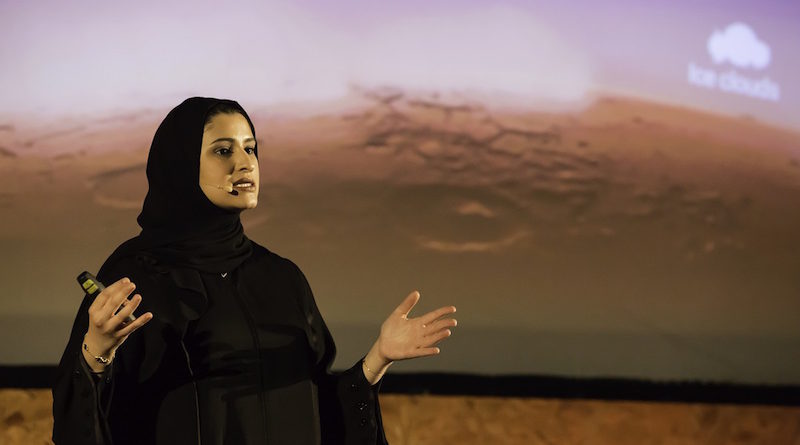 October 20th, 2017, Dubai (UAE): TEDxDubai has announced it will host the first live streaming viewing party in Dubai of this year’s TEDWomen which is taking place from 1-3 November in New Orleans, USA. The Dubai event takes place at Nadi Al Quoz, Alserkal Avenue on Thursday 2nd November from 5:30pm. Registration is open on www.tedxdubai.com.

The livestreaming viewing party is in celebration and support of accomplishing a major goal for the event: putting an Emirati on a global TED stage. Sarah Amiri is Science Lead for UAE’s space project Mars Mission Hope, and first spoke at TEDxSalon in Alserkal Avenue Dubai in November 2016.

TEDxDubai curator, Natascia Radice, has always been vocal about not running a gender specific event, making a conscious effort to maintain gender balance between speakers and attendees at all TEDxDubai events. But on this occasion, she is happy to make an exception.

Radice explains: “It’s easy to throw an all-female festival and then use that as an excuse to keep running a male agenda, so for me, as curator of TEDxDubai, it was important to give all women speakers the same opportunities as men in front of a mixed audience. I don’t know why it’s still not the norm everywhere – it’s better for the energy and for the purpose of spreading ideas! But this live stream party is a major and happy exception. In fact I couldn’t be happier or prouder to cheer for Sarah Amiri hosting our first TEDxDubaiWomen.”

The theme at TEDWomen this year is “Bridges” and Sarah has been invited to build a bridge with the audience and give insight into the UAE’s journey to Mars. It’s a fitting theme that has resonance on many levels for TEDxDubai. In 2009, the inaugural event brought together more 1,000 people, making it the first in the world to attract that large a number. At that stage it was the 18th TEDx event globally. As the first TEDx event in the MENA region, TEDxDubai has acted as a bridge in inspiring a number of its attendees to apply for their own licenses to run TEDx events in other countries.

“Our impact has been strong from the start. We have contributed several speakers to TED from our stage, collaborated on the TEDxChange Pilots with the Gates Foundation and trained and coached many people, not just speakers but also new licensees. We have over 100 nationalities at our events, making us the most inclusive TEDx, and we love the fact this happens right here in Dubai,” said Radice.

“In 2009 when we launched the first event we wanted people around the world to hear about Dubai not because of the financial headlines, but for the culture and ideas that were growing here. We wanted to export ideas from Dubai to the rest of the world, and put an Emirati on the main TED stage, and now we’ve done that. When Sarah takes to the stage, she will represent so much to so many.”

The TEDxDubaiWomen live streaming party runs from 17:30 – 19:00 on Thursday, 2nd November, with a limit of 100 seats. Alserkal Avenue, long term supporter of TEDxDubai has provided the space at Nadi Al Quoz.

For more information and to register, visit the website at www.tedxdubai.com.

Increase in number of females in UAE with critical illness cover: Research