“Everyone agrees with gender equality in principal – in practice that still doesn’t happen.” 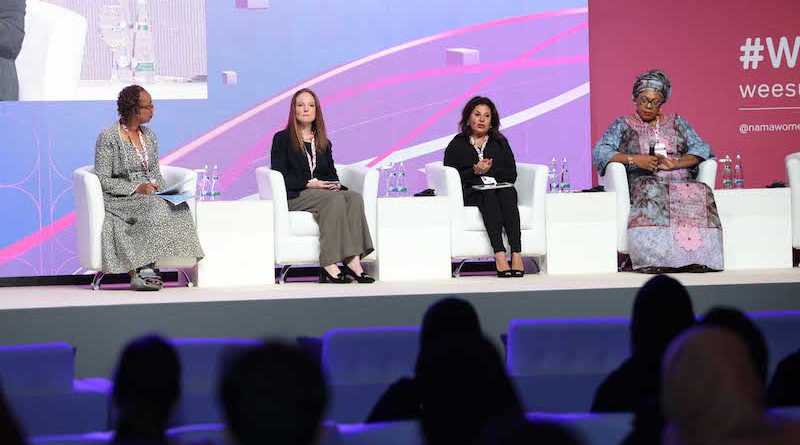 December 4TH, 2017, Sharjah (UAE): During the first session of the Women’s Economic Empowerment Global Forum taking place at Expo Centre Sharjah, titled ”Government Policies and the Private Sector’s Responsibility in Women’s Economic Advancement” the audience was told that although the UAE was proving to be one of the greatest influences in determining women’s empowerment, the Arab world in general was in dire need of support from both the private and public sector.

Speaking at the event, organised by Nama Women Advancement Establishment (NAMA), HE Reem Al Hashimi, UAE Cabinet Minister and Minister of State for International Co-operations, praised the legacy of the nation’s founding fathers for the UAE’s progressive attitude towards the status of women in society.

“Women have had the chance to prove that they are capable of working in all fields and that is thanks to the leadership of our country since the 1970s,” she said.

“Empowerment is the starting point to achieve stability and distance ourselves from ignorance and stability, and while we have overcome some Arab women stereotypes, we must fully integrate women, otherwise no society or community can achieve its potential. We must have the legislature framework and social awareness that supports women in all roles.”

The panel, which was titled ‘Government Policies and the Private Sector’s Responsibility in Women’s Economic Advancement’ also featured Nkiru Joy Okpala, National Coordinator, Nigerian Women in Business Network, who said that one of the biggest barriers to women’s empowerment were traditional attitudes.

“Basically, many men in Nigeria feel that they are superior and much of the responsibility of that lies with the government – when policies to empower women are drafted, there are no women involved and so the policies are irrelevant. Women need to be included.”

Dr. Enas Mekkawy, Director of the Department of Women, Family and Childhood at the General Secretariat of League of Arab States added: “The UAE has changed the status of women across Arab states and we can see that there is a dire need to find legislation to combat gender bias and discrimination, including opportunities and pay. The private sector is a key factor and without that support, there can be no true equality.” 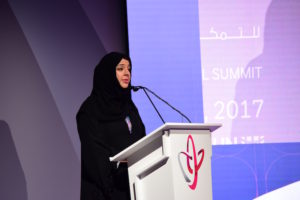 HE Reem Al Hashimi agreed, adding that equality came through validating the roles of both genders: “Empowerment of men and women are two sides of the same coin, either at home or at work, where both can realise their goals alongside – and with the support of – each other.”

Carla Koffel, Executive Director of the Pearl Initiative, said that more needed to be done to measure success in women’s empowerment.

“There has undoubtedly been so much progress, but unfortunately, so little data. What has continued to emerge is that leadership is one of the most significant factors in empowering women in the workplace. A commitment from the top, an environment where women feel comfortable and one where men are supportive of women in their roles are major factors. If people see there is a commitment to gender equality, that will filter down.”

Rounding off the first session of the day, Dr. Mekkawy cautioned that there is still a leap to be made from intention to action: “In principal, everyone agrees that there should be gender equality – in practice that still doesn’t happen.”

The two-day summit, taking place on December 4-5 at the Expo Centre Sharjah, is an ultra-high-profile global event organised by NAMA in line with its commitment to promoting women’s status economically and professionally and expanding their involvement in all walks of life on an equal footing with their male counterparts.

Speakers are taking part in 20 panel discussions as well as sector-specific and interactive sessions covering their future visions for the economic empowerment of women in front of more than 1,000 participants.

The first edition of WEEGS is being held under the patronage of His Highness Sheikh Dr. Sultan bin Muhammad Al Qasimi, Member of the Supreme Council Ruler of Sharjah, and his wife, HH Sheikha Jawaher bint Mohammed Al Qasimi, Chairperson of NAMA Women Advancement Establishment and Honorary Patron for Global Women’s Inclusion, to achieve the United Nation’s 2030 Agenda for Sustainable Development, which was adopted by the UN General Assembly in September 2015.