WEEGS COVERAGE: Experts emphasise the need to break stereotypes for their increased participation. 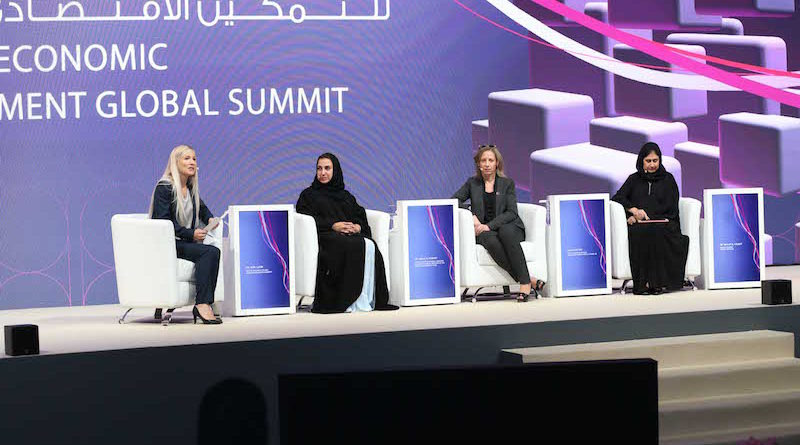 December 4th, 2017, Sharjah (UAE): Among the major topics discussed on the first day of the Women’s Economic Empowerment Global Summit (WEEGS 2017), the impediments to the participation of women in the occupations of energy, environment and media, and the need to integrate them more strongly into these key sectors were highlighted.

Opening the discussion, Dr Al Hosany, who believes passionately in the leading role that women can play at responding to global sustainability and climate change challenges, said: “When you think of energy and environment, what are the words that come to mind? Light, power, wind, solar, etc., but what about women? It is highly unlikely that women will come to mind while discussing these two topics. However, it is women who are often on the frontlines of building a more sustainable and just world.

“It is a fact that women in the energy sector are still grossly underrepresented, with research highlighting that they make up only approximately 27 percent of the industry’s workforce. Also, we are often marginalised in the economic and political spheres where decisions about climate change are taken and financial policies are drawn. We must challenge the ways in which women are perceived in the industry and cement their role in mitigating climate change in the world’s efforts towards building a more sustainable future.”

Highlighting the need for practical steps to bridge the participation gap, Rostom remarked: “I love the fact that the words deliberate and intentional are being used so many times in this discussion. Evaluating company practices that are designed to create an optimal organisational culture that would encourage diversity, as a starting point we need to think about the questions we are trying to answer. Are we trying to create more jobs, is it pay parity or work-life balance, or something else? Being very aware around the deliberate business objectives is crucial. Being pragmatic and action-oriented is key at this point because we all know what we need to do to bridge this gap.”

She gave an example of GE’s ‘Return to Career’ programme that was launched a couple of years ago to bring back the female human resources who have to take a career break after 7 to years of service to an organisation due to personal reasons like starting a family, etc., and then it’s hard for them to come back. At the end of the ten-week programme, half the batch was re-recruited.

Dr Yousuf urged society to rise above cultural stereotypes that bear heavily on women and prove to be a major obstacle to their career growth. She said: “Research says that in the next decade we are expecting a million women to join the global workforce. Gender equity isn’t an option anymore; it is an imperative to sustainable development of any society. The big gap lies in policymaking and decision-making because women are not represented enough on these positions.”

The panelists highlighted the need for women in boardrooms to be the voice of all women in civil society, and be role models for those who aspire to grow and flourish in various economic sectors.

As part of the panel session on women’s roles in media and marketing, Mariam Farag, CSR Program Leader at MBC Group, believes that while women are being given management positions, the title may be worth more than the responsibility.

“In many corporations we need to see more women decision makers. A lot of companies are throwing women a bone with an elevated rank, but we don’t see them on the board, where the real direction and decisions are made. If we empower each other, we can rise above that. In many respects, we’re still in the Stone Age – there have been a lot of changes but there is an even longer way to go.”

Fida Taher, Founder of the Women in Business Facebook group which now has 30,000 members, said that social media has a crucial role to play in empowerment: “This platform has finally given women a voice to unify and lobby for a common cause. It is a way for us to learn from each other and recognise the ways to progress and understand how things are changing.”

However, as a caveat to the power of social media, Sana Bagersh, CEO of BrandMoxie, warned that women must become much more involved to protect the next generation. “Women have always been the moral compass of a family unit and if we don’t become a part of the mechanism of social media – as well as the content – I really fear for our children’s future.”

Rounding off the session, filmmaker Sharmeen Obaid Chinoy claimed that many traditional western portrayals of women had been detrimental to empowerment.

“Women shouldn’t be perfect like the Hollywood narrative, that just isn’t natural and can completely distort reality and destroy confidence. In applying for an executive job, a man only needs to fulfill 30 percent of the requirements to feel confident, whereas a woman needs to meet 85 percent before she would even consider applying.”

The two-day summit is organised by the NAMA Women Advancement Establishment (NAMA) and United Nations Entity for Gender Equality and the Empowerment of Women (UN Women), under the patronage and support of His Highness Sheikh Dr. Sultan bin Muhammad Al Qasimi, Member of the Supreme Council Ruler of Sharjah, and his wife, Her Highness Sheikha Jawaher bint Mohammed Al Qasimi, Chairperson of NAMA and Honorary Patron for Global Women’s Inclusion, and is being held at Expo Centre Sharjah.

Themed ‘Women Excelling in Economy,’ the event has brought together over 70 international experts, gender equality advocates, governmental, and private sector representatives, and 1,000-plus participants, who will put a spotlight on the ways companies, governments, international organisations and civil society can work together to make value chains work for women, enable the full participation of women-owned enterprises in value chains, create decent jobs for women, and provide equal opportunities for women entrepreneurs locally and globally.