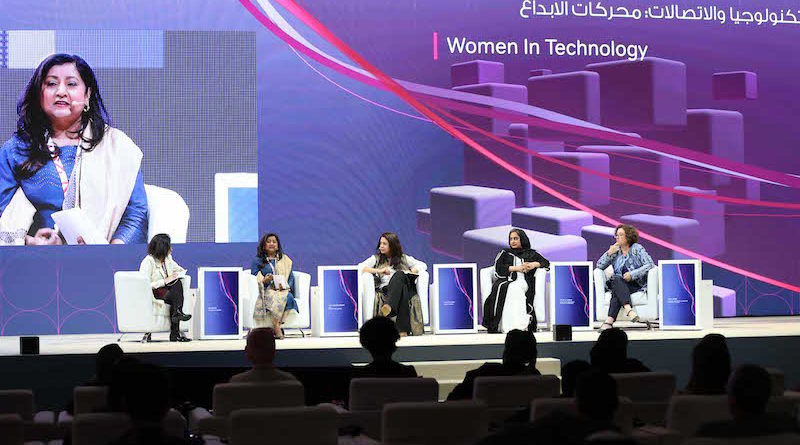 December 6th, 2017, Sharjah (UAE): Technology is one many sectors that has been more accepting of men than their counterparts. With digital innovations taking the lead in economy, education and society globally, this reality needs to change and become more inclusive. The Women’s Economic Empowerment Global Summit (WEEGS 2017) brought together leaders and role models in the field of technology from around the world who shared diverse experiences that people have with and without technology in their communities.

At a panel titled ‘Women in Technology’, they advocated the need to not only create more opportunities for women in the field by fulfilling the most important precondition necessary to empower them, which is to give them access to the internet and digital platforms of learning, but also try and close the gender gap by showing the next generation just how diverse, creative and exciting the technology sector can be.

Recent research from PwC revealed that only 3 percent of female students would consider a career in technology as their first choice. The most common explanation is that many felt they didn’t have enough information about what a career in tech could involve. This is the reality of more developed societies that have the requisite infrastructure in place. What about the underdeveloped and developing nations where people, especially women, still don’t have the purchase capacity of a basic internet package? Adjusting the learning and technology uptake requirements of different societies based on their development realities and challenges was a main focus of the panel.

Highlighting the fact that major parts of the world still don’t have access to the internet or are unable to afford it, Sonia Jorge, Executive Director at Alliance for Affordable Internet and Head of the Digital Inclusion Programme at Dubai Foundation, remarked: “We work to enforce policies that will address the issue of lack of internet in many parts of the world. In Africa, for instance, only about 25 percent of the entire population has any access to the internet that is meaningful. The fact that people are unable to come online due a variety of challenges is fuelling their exclusion and segregation even further as societies globally are becoming increasingly technologically driven. We talk about all these opportunities in the digital field, and the people that I work with are far from having them, especially women.”

Luna Shamsuddoha, CEO, Dohatec, Bangladesh, said: “I have been in the field for over 25 years, and the biggest challenge is to keep up with the rapid developments in technology that almost seem to be happening overnight. I started in 1992 when the World Bank and WHO approached me when CD-ROM technology was just coming up. I didn’t know much about it but I just grabbed the opportunity as it came my way. Back then I had no idea what the future in technology would entail, and certainly did not perceive that there would come a time where the entire world will be tech led. There have been numerous challenges on the way, but my sheer passion for the unknown fuelled me and I haven’t looked back.”

Shaloo Garg, Oracle Veteran, shed light on how the family plays a crucial role in shaping a young girl’s outlook, and must be supportive of her regardless of the field she chooses to pursue a career in. She said: “I am proud to be a woman in technology, and a major part of my success is owed to my parents who brought me up as an equal to my brothers, and kept motivating me to reach for the impossible.”

Noor Al Noman, Director of Department of Sharjah E-Government, said: “The technology hungry UAE that we see today wasn’t the same back in 1995 when I chose technology as my academic specialisation. My father played a big role in introducing me to the field. I love being in technology, and I am fascinated by how it is driving the future. I work in the government and we use a lot of technology in the UAE, and it must be mentioned here that women are leading the field here as the heads of e-government departments in four emirates out of seven.”

Reality translation was discussed wherein Noman highlighted that the UAE experience has been more to do with keeping up with the pace of technological advancements and taking the lead globally, while Shamsuddoha emphasised on how Bangladesh’s government is synergising its efforts and collaboration with a variety of agencies to give women access to the internet and digital learning opportunities in the country’s remotest villages. 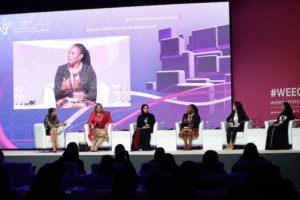 In the session ‘Science, Health and Sports Ecosystems’, delegates were told of the healthcare industry paradox in terms of workforce and pay scales. Dr Mai Ahmed Sultan Al Jaber, Deputy Medical Director, Healthpoint, said that the differences were vast.

“Although women make up 76% of the workers the pay gap is still unacceptable. While that gap has been decreasing, it is at such a slow rate that in order for men and women to earn an equal salary it would take 118 years.”

Speaking from a wider Arab perspective in broader science terms, Dr Amany Asfour, World President of International Federation for Business and Professional Women, pleaded for women to speak with one voice and break the chains of traditional prejudices: “It doesn’t matter whether it is sports, technology, medicine or anything else, many of the stereotypes of Arab women are myths. We should unify and make ourselves heard that neither our nationalities not our religion should make us lack our ambition, our belief in ourselves and the knowledge of what we can achieve.

From a sports perspective, Mayrilian Cruz Blanco, Former Head of Women’s Football Development at FIFA, claimed that girls and women who play sport are not just staying healthy; they are giving themselves an advantage in life itself.

“There is a very real correlation between sport and teamwork, social empowerment and above all leadership. It is no coincidence that 94% of women leading global companies have all been involved in playing sports at some time of their lives.”

She continued by adding that it is a woman’s right and responsibility to pass that belief onto the next generation. “Many women whether they play sports or not don’t see themselves as leaders. We must educate our girls that there is no reason on earth why they can’t be – we have to teach our daughters that for every Superman they can be a Wonder Woman.”

The two-day summit, which took place on December 4-5 at the Expo Centre Sharjah, is an ultra-high-profile global event organised by NAMA Women Advancement Establishment (NAMA) and UN Women in line with its commitment to promoting women’s status economically and professionally and expanding their involvement in all walks of life on an equal footing with their male counterparts.

Speakers have been taking part in 20 panel discussions as well as sector-specific and interactive sessions covering their future visions for the economic empowerment of women in front of more than 1,000 participants.

The first edition of WEEGS was held under the patronage of His Highness Sheikh Dr. Sultan bin Muhammad Al Qasimi, Member of the Supreme Council Ruler of Sharjah, and his wife, HH Sheikha Jawaher bint Mohammed Al Qasimi, Chairperson of NAMA Women Advancement Establishment and Honorary Patron for Global Women’s Inclusion, to achieve the United Nation’s 2030 Agenda for Sustainable Development, which was adopted by the UN General Assembly in September 2015.