WEEGS COVERAGE: Global Forum hears the cost of violence is more than physical and psychological. 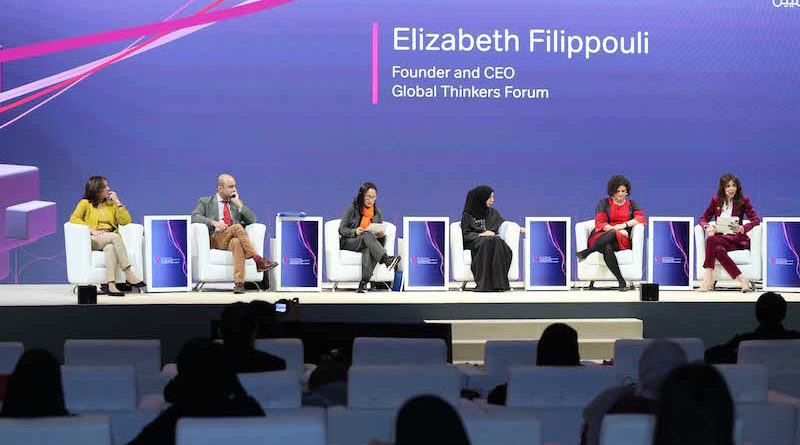 December 6th, 2017, Sharjah (UAE): Delegates at the Women’s Economic Empowerment Global Summit, organised by NAMA Women Advancement Establishment, being held in Sharjah, have heard that the prevalence of violence against women is having a devastating effect on economies as well as the horrific trauma suffered by victims and families.

Figures quoted in a panel titled ‘The Cost of Violence in Women’s Economic Participation’, said that half of women in the United States had been subjected to violence and one in three were victims of violence from an intimate partner. For many women in work, those attacks resulted in an average of five days away from their jobs, meaning that over the course of a year they lost up to half a month’s salary.

More stunning figures show that in England and Wales alone, the economy loses more than USD 32 billion per year due to violence against women by intimate partners.

Mavic Cabrera-Balleza, CEO and International Coordinator of Global Network of Women Peacebuilders said that while the gathering the information was vital, it wasn’t enough.

“We already have plenty of staggering data, what we lack are effective laws, policies and support for the victims and survivors. There are steps which have been taken at a practical level, but these are the exceptions rather than the rule. The bottom line is that we have no shortage of data, but there is a severe shortage of action.”

Sarah Brun, who works with the United Network of Young Peacebuilders, said that the threat as well as the act of violence was a massive deterrent in the empowerment of women. 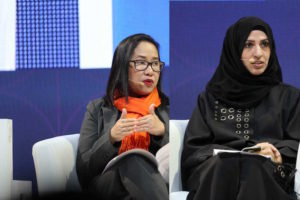 “Fear is everywhere for many women, whether that is on the street, leaving the house, fear of harassment in the workplace or even the repercussions of not having dinner on the table at the right time.

“To respond to those situations is like putting a Band-Aid on a gaping wound – it isn’t prevention, and that’s what women need more than ever. Women who experience violence once are likely to suffer it again, so we need to translate our goals into acts otherwise we are not going to break the cycle.”

Elizabeth Filippouli, Founder and CEO, Global Thinkers Forum, echoed the sentiment: “Fear is without doubt one of the key barriers. That, combined with a lack of confidence will prevent women from economic empowerment and independence. What we need to do is to mentor women and help them to overcome this debilitating culture of fear.”

In keeping with the goals of prevention rather than cure, Afaf Al Marri, Head of Sharjah Social Services Department, believes in focusing on basics.

“We need to put forward strategies by tackling the root causes – poverty for example. We need to address many of the beliefs that are so ingrained in our societies and support women in all capacities wherever and whenever that may be. Violence against women is not only unacceptable, it is rife, and in some parts of the UAE, it is thought that up to 95% of crime against women goes unreported.”

In conclusion, Mavic Cabrera-Balleza said that while women were subjected to violence and, as a consequence economic dependence, there was little hope.

“Human rights are interpreted in different ways by different cultures but we cannot expect women and girls to be independent unless they are empowered. They are generally seen as second class citizens in the workplace.

“Economic poverty is itself a violation of human rights and poverty affects women more than men – they have less access to economic resources such as banks and forms of credit to become self-sufficient. Whenever we ask women in poverty what they want more than anything, they list food, health, education and shelter, but top of that list will always come opportunity.”

The two-day summit, which took place on December 4-5 at the Expo Centre Sharjah, is an ultra-high-profile global event organised by NAMA in line with its commitment to promoting women’s status economically and professionally and expanding their involvement in all walks of life on an equal footing with their male counterparts.

Speakers have been taking part in 20 panel discussions as well as sector-specific and interactive sessions covering their future visions for the economic empowerment of women in front of more than 1,000 participants.

The first edition of WEEGS was held under the patronage of His Highness Sheikh Dr. Sultan bin Muhammad Al Qasimi, Member of the Supreme Council Ruler of Sharjah, and his wife, HH Sheikha Jawaher bint Mohammed Al Qasimi, Chairperson of NAMA Women Advancement Establishment and Honorary Patron for Global Women’s Inclusion, to achieve the United Nation’s 2030 Agenda for Sustainable Development, which was adopted by the UN General Assembly in September 2015.