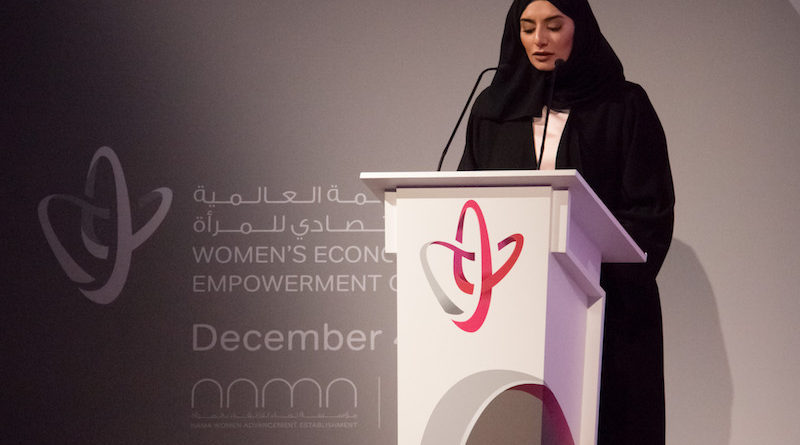 December 6th, 2017, Sharjah (UAE): ‘Of women, by women, for women’, was the vibe at the women-only panel, which kick-started day two’s proceedings today (Tuesday) at the Women’s Economic Empowerment Global Summit (WEEGS 2017).

Participants came together to discuss ‘Emirati Women: Potential and Possibilities’ – a closed panel session organised by the NAMA Women Advancement Establishment (NAMA) in collaboration with the UAE General Women’s Union, which shed light on the need for stronger enforcement of legislations to enable women’s participation in the economy, especially in the private and non-traditional sectors.

Emphasising on the need for reliable statistics and studies as a reference point for the creation of laws, which will tackle the specific requirements of women in the nation, Reem BinKaram, Director of NAMA Women Advancement Establishment, said in her opening keynote: “I believe the solution lies in, first, generating detailed and recent data about women, and then sharing it with relevant bodies and authorities, measuring women’s contributions to various economic sectors vis-à-vis their status in various work environments – be it ministries, SME support organisations, economic development departments, leading companies and organisations, or government and semi-government agencies. This is simply because the right statistics representing women in the economic sector is instrumental for drafting appropriate legislations. The availability of such information also gives a more comprehensive picture about sectors to focus on in the economic empowerment of women, especially in the private sector.”

The panel spoke about licences and other competitive advantages that would increase women’s participation in the economy, and stressed on non-traditional sectors like artificial intelligence, construction, oil and gas, environment and others, which still remain quite inaccessible to women.

Upon being asked about the opportunities and challenges faced by local women, HE Khawla Al Mulla, Chairwoman, The Sharjah Consultative Council, said: UAE’s vision didn’t come overnight. It’s the fruit of hard work by generations led by our founding father, Sheikh Zayed bin Sultan Al Nahyan. We have big aspirations for our women, but we need laws and legislations in place as they are the first step towards grabbing the right opportunities. We do have laws but how and to what extent they are enforced is the challenge. The refugees in the region, for example, especially women and children, are suffering despite laws that are supposed to protect their basic human rights. We need to look beyond what is apparent on the surface; we need to dig deeper if we were to make a real impact.

Stressing on the need for the right legislations to put theory into practice, she mentioned the recent decree on the establishment of the Sharjah Social Security Fund (SSSF) that has been issued by His Highness Sheikh Dr. Sultan Bin Muhammad Al Qasimi, Supreme Council Member and Ruler of Sharjah. The fund aims to acquire a legislative framework that embodies social security, comfort and dignified living for both local and expatriate families living in Sharjah. 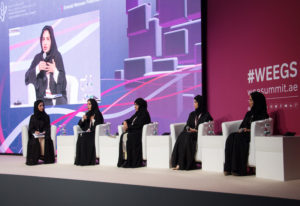 “Similarly, we can’t have human advancement or women’s advancement without binding legislations that are enforced in a transparent and accountable fashion,” Al Mulla noted.

Highlighting the need for Emirati women to be more aware of their rights and of the laws that safeguard their interests, HE Afra Al Basti, DG of Dubai Council for Women and Children and Member is the Federal National Council, added: I will tell you honestly that we can’t empower women just by empathy or kind words. They need to be supported by legislations and actionable steps. If a woman doesn’t own half the house she lives in, she could be kicked out in the middle of the night.

“Empowerment is as much a personal responsibility of a woman, as it is of external agents that support her cause. She owes it to herself to break the culture of silence at home as well as at work. Needless to say, the cost that the UAE has to pay as a result of a woman who is a victim of violence and discrimination is huge. Each individual is a valuable human resource, and the loss of even one individual shouldn’t be undermined as each one’s contributions are vital to the growth of the nation.”

Samah Al Hajeri, Director of Industrial Policies Department, Ministry of Economy, said: “The Emirati woman has reached advanced stages in the nation’s economy today. Some years ago, Women were not allowed to work in specific domains. I have worked in the oil and gas sector, which is male-dominated. The UAE Gender Balance Council has been created to bridge this gap.

“The middle management in many companies still faces challenges, especially in technical, non-traditional domains. Women in the UAE have proven they can work in AI, engineering, etc. the ADNOC oil field will be completely managed by women, which is an unprecedented step.”

Speaking about equality not just in pay but organisational positions, opportunities, education and more, she added: “There are legislations that support equality at the workplace, more in the public sector. We need to look more closely into why the private sector is lagging behind. We are trying to engage the private sector more with government and semi-government entities. Educational institutions need to be more responsive in updating their curriculum that trains the youth in jobs that are being created in the present day market. For instance, 3D tech training is already everywhere in Japan but we are still following a more traditional route. More importantly, women need a lot of coaching to realise their full potential. There must be professional coaching in universities to guide women towards appropriate careers.”

Dr Mouza Al Shehhi, Director, UN Women Abu Dhabi Office brought a global organisational perspective to the table, saying: Throughout my experience at the UN and with all the visits I have made globally, I feel women in the emirates are in heaven. UN Women has 30 programmers in over 59 countries that elevate women’s status in the economy and in society. The UN women office in the UAE is of immense value for local women, and helps us pick up from their global experiences.

“Our goal is to empower women in leadership and economy, and support women in crisis situations by raising awareness about women’s safety in crisis. The UN training facilities have empowered women economically all over the world, and we hope to incorporate their expertise to local experiences.”

The international recognition of UAE’s efforts for creating a level playing field for both genders has continued with the country being ranked first in the MENA region by the World Economic Forum Gender Gap Report 2016 and among the top 10 countries in the global gender wage equality index, signaling a brighter future the empowerment of women in the country.

The UAE is home to almost 30,000 businesswomen who run projects worth estimated investments of $15 billion (AED 55 billion), while women represent 46.6% of the country’s total work force in the country, demonstrating the UAE’s leadership in women’s empowerment regionally.