Ananke remember a visionary from Pakistan, celebrating Fehmida Riaz in the #16DaysofActivism campaign. 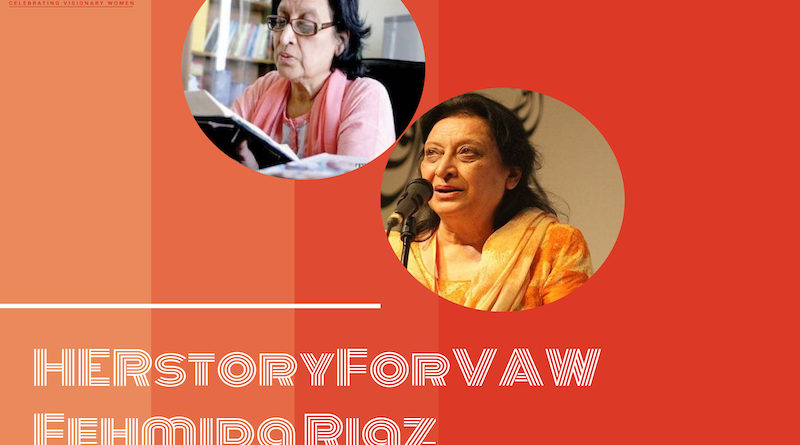 Urdu poet and revolutionary writer, Fehmida Riaz, was born in July 28th, 1945 in a literary family of Meerut, Uttar Pradesh, India. The trailblazer known for her strong feminist and anti-establishment sentiments, migrated to Hyderabad (in the province of Sindh, Pakistan) due to her father’s job transfer. After graduating, she began working as a newscaster in Radio Pakistan and started writing from a very early age.

Fehmida started her own Urdu language publication called Awaz (Voice), which during the eighties, caught the eye of the then military dictator Zia-ul-Haq, and was branded as well as banned for its revolutionary perceptions against the ruling government and liberal ideals. Both Fehmida and her husband Zafar were charged on various accounts with the latter being arrested and the newspaper shut down. Fehmida and her family lived almost seven years in exile.

In an interview for the Hindu, she famously said: Feminism has so many interpretations. What it means for me is simply that women, like men, are complete human beings with limitless possibilities. They have to achieve social equality, much like the Dalits or the Black Americans. In the case of women, it is so much more complex. I mean, there is the right to walk on the road without being harassed. Or to be able to swim, or write a love poem, like a man without being considered immoral. The discrimination is very obvious and very subtle, very cruel and always inhuman.”

Appointed as the Managing Director the National Book Council of Pakistan during the first Pakistan People’s Party (Benazir Bhutto’s party) government (1988-90), Fehmida was also associated with the ministry of culture during Benazir’s second tenure as a prime minister.

Apart from being a human rights activist to the core, she authored more than 15 books on fiction and poetry with her first literary work, Pather Ki Zuban, published in 1967

Her poetic collection, often termed revolutionary, includes ‘Dhoop’, ‘Pura Chand’, ‘Admi Ki Zindagi’ and more. Her novels include ‘Zinda Bahar’, ‘Godaavari’ and ‘Karachi.’ Fehmida’s second collection of verse was frowned upon when it was published in 1973 as it contained sensual expressions – a notion considered a taboo for female literati.

She was appointed chief editor of the Urdu Dictionary Board in Karachi in 2009.

Suffering from prolonged illness, the eminent writer and human rights advocate passed away on November 21st, 2018.